Food Security Slipping Ever Further Away 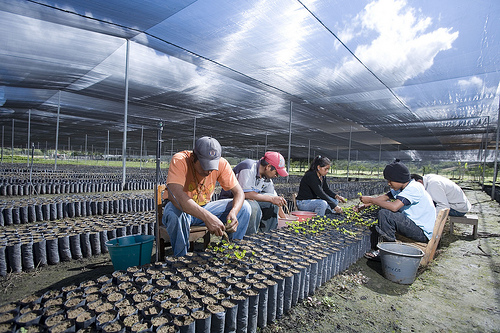 According to speakers at the launch of the World Bank-International Monetary Fund (IMF) Global Monitoring Report 2012, on the sidelines of the Bank-IMF spring meetings, a lack of focus on agriculture and nutrition in development priorities could prove disastrous in the event of another spike in food prices.

The sudden rise in food prices in 2007-08 is thought to have brought the number of hungry people to more than one billion internationally. While food costs dropped in 2009 due to the international financial crisis, 2011 again saw record highs, brought about in part by variable weather conditions, mounting oil prices and the growing use of biofuels.

According to information released by the United Nations Food and Agriculture Organisation in early April, food prices have continued to rise during the first three months of this year, and currently remain higher than during the crisis period of 2007-09. According to many observers, high food costs have become the “new norm”.

The social implications of fluctuations in food costs have been clear. The high cost of staple foods was a major driver behind the Arab Spring protests, for instance. Today, continued high food prices are fuelling inflation worries across the globe, notably in India and China.

The Global Monitoring Report (GMR), which annually tracks development indicators, warns that critical macroeconomic policy buffers in low- income countries have yet to be rebuilt.

“If (low-income countries) have to confront another sharp global slowdown or another surge in food or fuel prices, these countries would start from a weaker position…,” the report states. “A new global food price spike would present low-income countries with difficult trade-offs among price stability, external, and social objectives.”

Although governments around the world did move to put food security atop the international agenda in 2011, those words have translated into little substantive action.

“The international community hasn’t followed through on any promises on making sure that prices are stabilised,’ says Danielle Nierenberg, director of the Nourishing the Planet Program of the Worldwatch Institute, an environmental think tank here. “As the G8 and G20 meet, there is an opportunity to make sure that prices stabilise and that farmers are given the resources they need to survive.”

According to the GMR, international aid earmarked for agriculture, food and nutrition constituted just 10 percent of total pledges in 2010. In fact, Nierenberg says such low figures are relatively standard.

“For the past 30 years, there’s been a tendency to turn our backs on agriculture,” she told IPS. “One good thing to come out of the (food price) crisis has been new attention given to agriculture.”

That attention has yet to lead to new development priorities, however. “Surprisingly,” the GMR notes, the amount of aid devoted to agriculture, food and nutrition “has not increased in response to the recent food price spikes.”

“The international community is ill-equipped to deal with what is going on,” Nierenberg says. “But it’s not just donor communities – it’s African countries, Asian countries, increasingly Latin American countries. Currently, only nine African governments invest more than 10 percent of their budgets in agriculture.”

With just three years to go before the 2015 deadline set to reach the U.N. Millennium Development Goals (MDGs), observers are worrying that the economic downturn and ongoing lack of attention paid to stabilising food prices could slow progress towards reaching these development indicators.

International aid, having likewise slowed in recent years, is expected to continue to fall off by around 0.2 percent per year.

While many agree that an era of increased austerity would require that aid monies be spent more efficiently, the data surrounding nutrition is not encouraging in this regard.

Nutrition can directly impact on several of the MDGs, including two on which the GMR warns that countries are furthest behind, child and maternal mortality. Yet nutrition only accounts for around 0.3 percent of total international spending, a figure that has not risen since the MDGs were agreed upon in 2000.

While the needs are clear, how best to deal with high and unstable food prices is up for debate. One of the central priorities outlined by the GMR is liberalised trade regimes.

According to some analysts, however, liberalised trade regimes are at the root of the current problems.

“First and foremost, the long-term neoliberal neglect of agriculture has caused an agrarian crisis that has muted the supply response capabilities of agriculture,” Mritiunjoy Mohanty, an economist in Kolkata, told IPS.

“Financialisation of agricultural commodities and related financial speculation have also amplified the price effects of supply-demand imbalances, as has the control of transnational firms over the global agricultural supply chain.”

Instead, both Mohanty and Nierenberg suggest a renewed focus on localised agriculture, to safeguard both farmers and consumers.

“We need to refocus on local foods rather than imported foods,” Nierenberg says. “By depending on regional or local food systems, we can build resilience that is not at the whim of global markets. Trade liberalisation, on the other hand, often doesn’t benefit those who really need the most help.”