JOHANNESBURG, Apr 20 2012 (IPS) - Thousands of residents in Diepsloot, a large township north of Johannesburg, South Africa, are queuing for hours to access clean, safe water a week after their supply was contaminated by sewage. 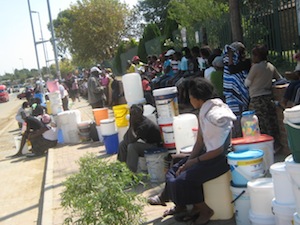 The contamination occurred when a contractor working on a nearby sewer line broke the water pipe that supplies Diepsloot. Though the damage was repaired, it is believed that E. coli in sewage contaminated the water supply. Residents here were warned by Johannesburg Water authorities not to drink water from their taps on Apr. 13.

However, a week after the incident, residents say there are not enough temporary water tanks to provide potable water for everyone in the township of over 150,000 people.

“Everything possible is being done, we have 65 stationary tanks and 12 mobile tanks for residents to use in the interim,” says Johannesburg Water spokesperson Millicent Kabwe, adding that each of the stationary tanks has a capacity of 5,000 litres.

However, community leader Scelo Shezi says the temporary tanks do not hold nearly enough water for the township’s large population.

“We were told that there is not enough transport to bring more water to the community…but there is a need for more water tanks,” says Shezi.

He says residents are quickly running out of patience.

“We are worried that people have had to wait in the queue for a very long time. It’s really a challenge, and we hope that it will be fixed very soon,” he says.

While only one district, ward 113, in the township seems to have introduced the “one family, one bucket system” after fights broke out because people where unhappy about the number of buckets individuals brought to collect water in, women and children with multiple buckets are often seen in long queues waiting their turn.

A frustrated Duduzile Ngema says that she has been waiting in the queue for almost the entire day.

“We don’t bath, we don’t wash… we have a big problem here in Diepsloot. They say that the water will come back, but we have been waiting for a long time. They told us that we can die if we drink the contaminated water and it causes diseases,” says Ngema.

She says that the situation is degrading, as residents are forced to find alternative means to relieve themselves. Ngema was hesitant to go into details, but she says resident are using buckets and, only when the water tanks arrive, they flush the waste away.

“It’s very difficult because the toilets need water to flush, so we are not going to the toilets, we just use buckets,” says an embarrassed Ngema.

Another angry and desperate resident, Thami Dlodlo, says that the water crisis has brought life to a standstill in her community.

“We can’t cook, we can’t bath, and we can’t do anything. There is no life without water, we need water, clean water,” says Dlodlo.

She says residents have been forced to buy water, but most are unemployed and cannot afford it. Diepsloot is an informal settlement comprised of government-funded brick houses, with running water and electricity, and shacks – assembled from metal zinc and wood – which do not have running water.

Families in the government houses have water metres and pay a subsidised fee. However, the poorer residents here cannot afford to pay for water, and use communal taps that provide free water across the township.

“Now we buy the water, from people that have cars, for 1.25 dollars a bucket. We buy it so our children can go to school, and for drinking. But we are not working… we do not have much money to buy water. It’s so difficult for us because we don’t even have water to drink our medicines with,” says a dejected Dlodlo.

In some areas in the township safe water has been restored, but Johannesburg Water says it is not possible at this stage to indicate when the water will return to all of Diepsloot.

Johannesburg Water has been criticised by South Africa’s official opposition party, the Democratic Alliance, for its slow progress in restoring safe drinking water to Diepsloot.

However, Professor Akpofure Taigbenu from the Water Engineering Department at the University of the Witwatersrand says it takes a few days to restore safe, clean water after it has been contaminated.

“It takes a couple of days to restore the system, but six days is on the high side in my view. The key thing is to have a good network of water tanks for example; there must be a limited walking distance between where individuals use water and those tanks. If the walking distance is large, it puts a great deal of stress on the inhabitants,” says Taigbenu.

“The complexity of rectifying this situation and the magnitude of the network, the flushing process, and the related engineering and scientific processes do mean it takes a bit of time,” says Kabwe. “The interventions implemented that stem from these processes have shown significant improvement in terms of quality so far, but they are not complying with national standards as yet.”

Meanwhile, Water Affairs Minister Edna Molewa says South Africa needs to invest 71 billion dollars in water infrastructure, services and demand management over the next decade. However the National Treasury has a budget for only 44 percent of the amount needed to upgrade South Africa’s water services.