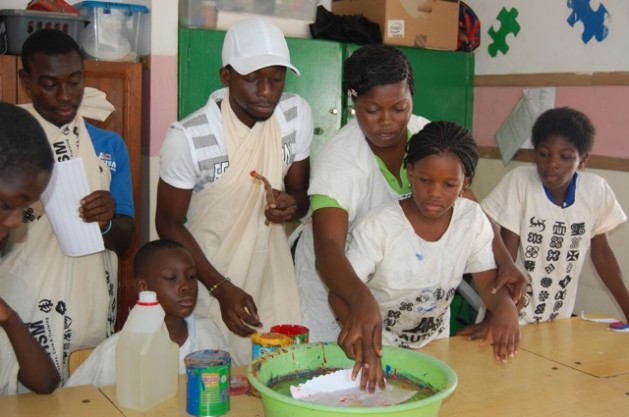 ACCRA, May 18 2012 (IPS) - At first glance Nortey Quaynor looks like any ordinary 29-year-old Ghanaian. If you spend a little time with him, though, you soon realise that something is different.

He avoids eye contact and gives one-word answers to most questions. Sometimes he covers his ears with his hands to block out the sounds of children in a nearby playground.

When he was just an infant Quaynor was diagnosed with autism, a developmental disorder that is characterised by impaired social interactions.

“Nortey is a good guy only if you understand what autism is,” said Abeiku Grant, who taught Quaynor at the Autism Awareness, Care and Training Centre in Accra when he was younger.

“If you don’t, you see him as a bad guy because maybe you tell him to do something and he does something else,” Grant told IPS.

Quaynor’s mother, Serwah Quaynor, established the centre in 1998 because she was not satisfied with the few services available for her son in this West African nation. The centre is a rare place in Ghana where children with autism can receive the special care and attention they need.

The United Nations Educational, Scientific and Cultural Organization (UNESCO) estimated in 2009 that there were 150,000 people in Ghana with autism. The organisation also reported that only one to two percent of children with disabilities living in developing countries receive a basic primary education.

But Max Vardon, executive director of Ghana’s National Council on Persons with Disabilities, said that statistics on disabilities in Ghana are notoriously unreliable, and the actual number could be much higher. His organisation wants to raise 13 million dollars so it can conduct a national census on disabilities.

“Disability has been relegated to the sidelines,” Vardon said.

In that regard, autism is no different from any other disability in Ghana.

“I’ve never heard of the government doing anything about children with autism,” Grant told IPS.

The Autism Awareness, Care and Training Centre gets most of its funding from student fees. Children are required to pay 300 Cedis (160 dollars) per month to attend classes from Mondays to Fridays. The centre offers autistic children sensory, speech and music therapy. It has a team of trainers who work with students one-on-one to help with their development.

“Some children have now moved to mainstream schools,” said Baaba Enchill, a coordinator at the centre.

But the success stories of the centre are marred by a constant lack of space and resources. It can only accommodate 30 students, and has to turn away an average of two to three children each week. There are a few other similar institutions in Ghana, but they all face the same problems.

The New Horizon Special School in Accra has provided a learning space for Ghanaian children with Down’s syndrome, cerebral palsy and autism for 40 years. Like the Autism Awareness, Care and Training Centre, New Horizon depends on student fees and donations from private donors to stay afloat. Most of its 120 students pay 500 Cedis (about 265 dollars) per term to study there.

“We don’t receive any form of government support at all,” said Vanessa Adu-Akorsah, New Horizon’s principal. “Our director has tried so many things to get government on board.”

Adu-Akorsah said that most of her students come from single-parent homes. “Unfortunately, when these children are born, their fathers desert their mothers.”

The school cannot afford to offer services such as speech therapy, and has a physiotherapist who can only attend students who can bear the extra cost of her services.

Adu-Akorsah said that her teachers receive “meagre” salaries and that government support could go a long way toward improving the school’s services and making it more accessible to low-income families.

Ghana does have a network of boarding schools for children with disabilities, but Adu-Akorsah said that they leave a lot to be desired. At New Horizon each student gets individual attention, but the government-run schools have one teacher for every 12 students.

Tamba Gbessay, deputy head of the government-run Dzorwulu Special Needs School in Accra, said progress has been made when it comes to special education in Ghana. “We are doing far better than when we started in the 1960s,” he said.

“Government is more involved and has increased its funding for the employment of workers, maintenance, vehicles and personnel training.”

His school has 163 students who do not pay fees. But it does not cater for children with autism.

“We don’t have specialists trained in that area,” he said.

Vardon said government services for people with disabilities are poor because of a lack of resources.

“They are aware of the problem. There is a special education division. But that’s as much as we are able to provide for those kids with disabilities at present. It is not enough. It is nowhere near enough,” he said.

Thanks to the Autism Awareness, Care and Training Centre, Quaynor has come a long way. He works at a factory for a publishing company, can read and write, and knows how to sign the alphabet. He has also taught his trainer, Grant, a thing or two.

“He taught me to know that you can’t throw rubbish around,” Grant said. “Another thing he taught me is to wear my seatbelt whenever I sit in my car.”

To help others like Quaynor, the centre could use a boost from government and private donors.

“We need help,” said Enchill. “As much as anybody can give us.”