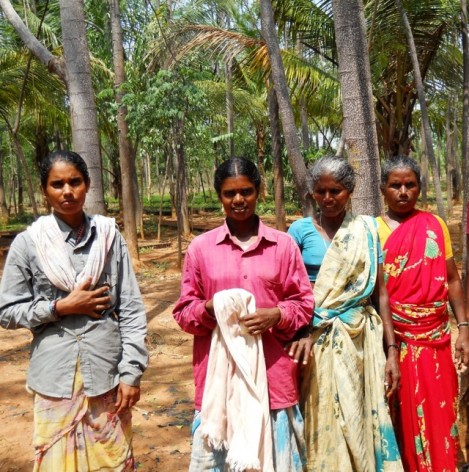 SHIVGANGA, India, May 30 2012 (IPS) - Valli, 50, and Sarasu, 60, have been working with Energy Plantation Projects India (EPPI) since inception in 2007, the income they earn forming an integral part of their household budgets. “We easily manage household work and a salary-paying job,” they tell IPS.

Around 20 women take care of daily maintenance work while another 45 work seasonally. The women come in at daybreak and leave at two pm, earning a decent Indian rupees 150 (approximately three dollars) for half-a-day’s toil.

“We devised the timings to suit the women, as we found them to be sincere workers,” says Sam Venkatesan, director of EPPI. “They are free to go home in the afternoon and also graze their goats on lands we have set aside for the purpose.”

The women, who form over half the company’s entire workforce, are happy to have an assured income in return for planting and tending saplings, making shade-nets and taking care of other nursery essentials.

Grown with seven indigenous biomass-producing plant species, the plantation is “one of the first of its kind in the world,” says Venkatesan, who once worked as an executive with Motorola, the United States-based cell phone giant.

Venkatesan explains that the plantation is biometrically calculated for calorific value, rate of growth and yield per acre to supply its own two megawatt gasification power plant with the assured biomass supply that is essential for a successful gasification system.

Gasification converts organic- or fossil-based carbonaceous material, by controlled heating, into syngas (synthetic gas), and the power derived from burning the gas is considered to be renewable energy.

EPPI’s 300-acre biomass plantation now has trees that stand seven metres tall on degraded lands that have been contoured for watershed conservation with reservoirs constructed to enable drip irrigation.
“The groundwater has risen from 300 feet in 2007, when we started the plantation, to 80 feet now,” says C. Lalrammawia who manages technology at the plantation. “Rainfall has similarly increased from 250 mm annually in 2007 to over 800 mm in 2011.”

According to the National Commission on Agriculture, India has 60 million hectares of degraded non-forest and forest lands available for tree growing, including biomass plantation.

The ‘side effects’ of planting for energy are already visible at EPPI and these include improvement in the microclimate of the region with a regeneration of biodiversity. The reservoirs have becoming watering holes for deer and birds now flock to the once degraded, arid lands.

The plantation costs 400 dollars per acre for all-inclusive maintenance annually and yields 50 tonnes of biomass per acre annually on average.

EPPI has received four million dollars as venture capital to begin its two Mw power plant running on biomass gasification using its own energy plantation. But, there are plans to scale it up to six Mw by tapping leasehold energy forests.

India’s ministry of new and renewable energy (MNRE) after inspection and approval granted EPPI’s energy plantation 272,000 dollars towards reimbursement of equipment costs for every Mw of power produced.

Deepak Gupta, who inspected the plantation during his tenure as secretary (topmost official) at MNRE, believes small biomass gasification power plants are ideal for providing local power, jobs, natural regeneration and availability of biomass supply to nearby industries.

“A dedicated biomass power plant, able to work on its own 24-hour supply, is the answer to India’s local needs,” Gupta told IPS.

As per Indian government regulations, EPPI can upload power into the national grid. But, the company has opted to distribute power to the local grid to ensure power supply to villages close to where its lands are situated.

“We can’t guarantee electricity to each household because we don’t control the grid, but this will surely ensure local benefit. Social inclusion for us is not just corporate social responsibility, it is our business model,” says Venkatesan.

At a calculated 26.4 tonnes of biomass needed to produce one Mw of power daily, the company envisages a ‘plant load factor’ (PLF), or running capacity, of 80-85 percent, which is better than average.

“We can safely calculate this PLF because we own the plantation and have control over supply,” says Jayanth Ganapathy, who manages the company’s business operations.

“Which means, for instance, that we need more land per megawatt, or we calculate an increased buffer amount for each necessity,” says Venkatesan. “This is our management technique.”

“If I were to accept all factors such as climate change, pests and weather vagaries, I’d have to give up,” said Venkatesan. “But EPPI has shown the world that an energy plantation company is more than possible.”