GUATEMALA CITY, May 29 2012 (IPS) - The ambitious Cuatro Balam project for the management and conservation of the Maya Biosphere Reserve in the northern department of Petén has been put on hold after the change of government in Guatemala, say environmental and other civil society organisations. 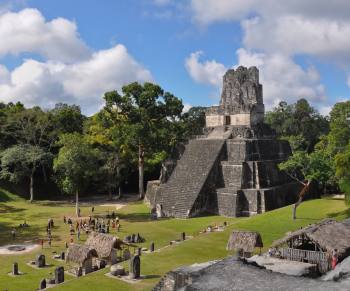 The Temple of the Masks at the Maya archeological site of Tikal, part of the Maya Biosphere Reserve. Credit:Mike Vondran CC BY 2.0

“It seems to me that the new government does not want to continue the project,” activist Javier Márquez of the environmental group Defensores de la Naturaleza (Defenders of Nature) told Tierramérica. “It was a very good initiative, because they were beginning to plan what should be done with the country’s protected areas.”

“B’alam” means “jaguar” in a number of Mayan languages, and “cuatro” is Spanish for “four”, so the project’s name could be translated as “four jaguars”. “Cuatro Balam” also refers to the four main figures of the K’iche’ Maya sacred text Popol Vuh, linked to the four cardinal directions.

Launched in 2008 by then president Álvaro Colom, who left office in January of this year, the Cuatro Balam initiative was aimed at increasing ecotourism in the Maya Biosphere Reserve, a protected area of more than 21,000 sq km that encompasses natural parks and archeological sites such as El Mirador, Tikal, Uaxactún and Piedras Negras.

The United Nations Educational, Scientific and Cultural Organisation (UNESCO) declared this area a biosphere reserve in 1990.

Cuatro Balam was designed to promote research and conservation activities over a 15-year period (2008-2023), through public/private investment, with active participation by local communities.

One of its objectives was to increase tourism to 1.5 million visitors a year. It included the building of infrastructure such as a silent electric train with a panoramic view that would travel through the rainforest at a speed of 16 km an hour.

It also envisaged the creation of the University of Biodiversity, which would focus on the study of the environment and the classification and genetic registry of native species, and the Centre for Maya Studies, devoted to research on the history of these indigenous peoples.

“It promoted civil society, private sector and community participation in strengthening sustainable development with the overall goal of consolidating the department of Petén as a tourism destination,” explained Márquez.

“There were big infrastructure projects that could have altered the biodiversity of the biosphere reserve, like highways and large hotels, but these were never materialised,” he added.

The Maya Biosphere Reserve is a vast stretch of rainforest in an area that borders on Mexico and Belize, and is home to thousands of animal and plant species and countless archeological sites, some of them thousands of years old.

Sites like Tikal and the less explored El Mirador were massive cities or urban complexes with thousands of buildings, temples and monuments.

Today this natural and cultural treasure is being threatened by activities such as drug, human and wildlife trafficking, land invasions, livestock farming, forest fires and illegal logging.

However, following the inauguration in January of Otto Pérez Molina, who will govern the country until 2016, this ambitious plan to protect the biosphere reserve has apparently been put on hold. Tierramérica found no reference to Cuatro Balam on the National Council of Protected Areas website, nor had it received any response from government sources to its queries on the subject by press time.

“There has been no further movement,” lamented Carlos Kurzel of the non-governmental Association of Forest Communities of Petén, which groups together 23 peasant and indigenous organisations for the management of forests as a means of subsistence through ecotourism and other activities.

Prior to the change in government, there has been “a great deal of openness to dialogue with local communities, which was one of the greatest merits of Cuatro Balam. Security was also considerably increased,” Kurzel told Tierramérica.

Through coordinated efforts among the army, police, government environmental agencies and civil society, the authorities had worked to improve governability in Petén.

One result of these efforts was the recovery in September 2011 of 138,000 hectares of natural forest that had been illegally occupied, according to the Agencia Guatemalteca de Noticias, a government news agency.

In addition, “there was a great deal of talk about tourism development in El Mirador, the construction of infrastructure and promoting tourism, although our participation was rather cautious, because we were concerned about whether economic development would directly benefit the local communities,” said Kurzel.

In addition to Cuatro Balam, there are a number of other initiatives aimed at creating opportunities in Petén.

The El Mirador Project was created to foster tourism development at this little-known archeological site, which dates from the pre-classic Maya period of 1000 BC to 300 AD.

One of the most notable structures in El Mirador is La Danta temple, considered not only the largest pyramid built by the Maya but also one of the largest in the world in terms of total volume. Measuring 300 metres wide, 600 metres long and 72 metres in height, it is still largely covered by vegetation.

Hilda Morales, coordinator of the project, told Tierramérica that so far, 480 people have been provided with training in quality management, Maya culture, basic English, cooking and other skills. Regulations for the management of forest concessions have been drawn up, and the Reino Kan brand has been created.

The project has been implemented since 2009 by the Foundation for the Development of Guatemala (FUNDESA), with 1.3 million dollars in financing, 70 percent provided by the Inter-American Development Bank (IDB) and the rest by the Guatemalan government.

According to Morales, the project was independent from Cuatro Balam, although the tourism development of El Mirador was one of the pillars of the government initiative.

“Unfortunately, when there is a change of government, a lot of initiatives get pushed aside,” said Morales. “The Maya Biosphere Reserve is the largest protected area in the country. It shelters invaluable wealth, and the challenges it faces are daunting,” she added.

Meanwhile, a team headed by U.S. archeologist Richard Hansen and the Guatemalan Institute of Anthropology and History, a government agency, have been working on the excavation of El Mirador since 1987.

The Mirador Basin Project, as the initiative is known, is aimed at studying the origins, dynamics and demise of Maya civilisation in northern Guatemala.

Cuatro Balam, working in consensus with local communities, “made it possible to harmonise public investment with international investment to strengthen governability and economic development in the reserve,” said Byron Castellanos of the non-governmental Balam Association.

These actions “should continue, and there is no need to invent new initiatives,” he told Tierramérica.