OP-ED: Putting Resilience at the Heart of Development

UNITED NATIONS, May 4 2012 (IPS) - The world’s population today is healthier, wealthier, and better educated than ever before. Yet, despite incredible progress, disconcerting realities stubbornly persist. 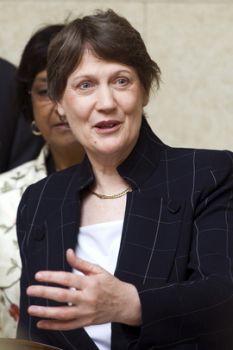 Many people still live in extreme poverty, even where economies are growing rapidly. Over 20 percent of the world’s population lives in states which are considered fragile and highly vulnerable.

Global economic and financial systems remain volatile. Armed violence and organised criminal networks are a growing threat to human security in many countries. Women continue to face serious barriers to real empowerment. Our planetary boundaries are being stretched to the limit.

As the world’s population increases from the current seven billion people to a projected almost nine billion in 2040, and if current consumption and production patterns continue, this stress on our planet and its resources will undoubtedly increase.

Therefore, when world leaders come together in Rio de Janeiro in June to discuss sustainable development, resilience must be an important part of the discussion.

Achieving development which lasts is not about trading economic, social, and environmental objectives off against each other. It is about seeing them as interconnected objectives which are best pursued together.

Resilience cannot be built overnight. It takes time. But it is our best chance of locking in progress made to date, and advancing equitable and sustainable human development.

Resilience implies the inherent capacity of a system to deal with any external shock, no matter how well anticipated or how surprising it is.

For the UN Development Programme (UNDP), achieving resilience is a transformative process which builds on the innate strength of individuals, their communities, and institutions to prevent, lessen the impacts of, and learn from the experience of shocks of any type, internal or external, natural or man-made, economic, health-related, political, or social.

In 2000, Mozambique was battered by cyclone-related flooding, which left 800 people dead, half a million people homeless, and disrupted the livelihoods of over one million more, affecting 4.5 million people in total.

Fast forward to 2007 when floods of similar magnitudes again hit Mozambique. This time the death toll was 29 people compared to 800 people and the numbers displaced were some 70,000 compared to one million. When Mozambique was hit for the second time, the society was much more prepared, disaster risk had been addressed in a more comprehensive manner, and the government had provided leadership and articulated a clear strategic vision.

The international community stepped in to provide support for institutional, policy, and capacity development. Community and livelihood risk reduction programmes were initiated, and emergency response systems strengthened. Civil society organisations and the Red Cross movement worked with local governments and the U.N. on community-based preparedness.

The key lesson from Mozambique’s experience is that when societies invest time in learning from adversity, they become better prepared to face it in the future. State institutions and local governance structures were better prepared and had more coherent response strategies.

Self-help efforts by communities played vital roles in saving more lives than any external intervention could have done. The society took far less time to self-organise and recover.

In building resilience, the first priority must be prevention, complemented by explicit efforts to reduce societal vulnerabilities and a commitment to maintain the integrity of communities, institutions, and ecosystems.

Institutions – particularly structures and systems of governance – provide frameworks for building resilience. When state institutions fail to guarantee access to justice and a functioning public service, and cannot provide an enabling environment in which people can flourish, communities become more vulnerable to the criminal or other violent entities which will fill any void.

State fragility is a function of not only weak institutions but also of social systems under strain. A resilient state is anchored in a cohesive society. Stark inequalities and inequities undermine that.

Sustainable development based on resilience also calls for developing the capacity of the poor to overcome challenges, and should be guided by a commitment to national ownership, comprehensive and integrated responses, innovation and learning, and long-term strategic engagement.

Building social protection systems is an important investment in resilience, as they shield the most vulnerable from the worst effects of shocks and help prevent irreversible development setbacks. These are the steps many nations we now call developed took in the 1930s and 1940s.

Resilient societies also those with a capacity for dialogue which can amicably mediate differences. They exhibit social and civic trust – thus enabling people to feel included and encouraged to work together.

It takes hard work to establish these attributes in any society. It is even more difficult to do so in those wrecked by conflict and violence. Yet, without such capacities for tolerance, fragility can overwhelm the institutions and systems of a society.