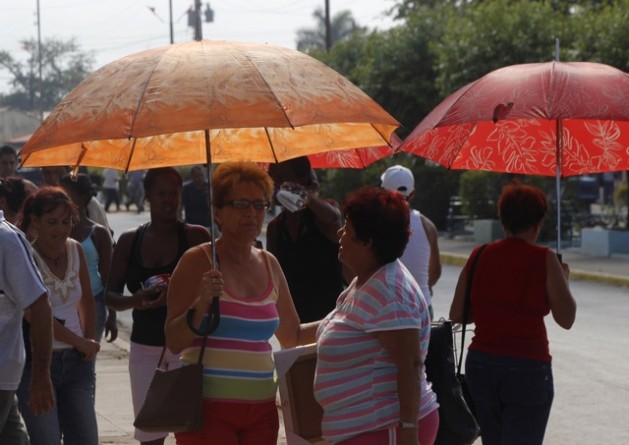 Higher temperatures are one of the impacts of climate change. Credit: Jorge Luis Baños/IPS

HAVANA, May 21 2012 (IPS) - Cuban climate change scientists have been sharing their research findings and experience over the past few years with the rest of the Caribbean islands, using PRECIS, a regional climate modelling system, to help design adaptation policies. 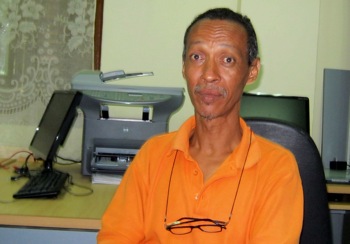 Abel Centella: "We must not wait; we must begin acting now." Credit: Jorge Luis Baños/IPS

PRECIS (Providing Regional Climates for Impacts Studies), which was developed at the Hadley Centre at the UK Met Office – Britain’s national weather service – began to be used in the Caribbean in 2003, Abel Centella, scientific director at the Cuban Meteorological Institute, told IPS.

Centella said scientific forecasting is essential for designing adaptation policies, and added that no one single country can take on that challenge on its own.

For that reason, he travelled to Nicaragua to train experts there in the use of PRECIS.

Q: What does this system consist of, and how important is it?

A: Climate models are the best tool available to science today to explain what is going to happen with the climate in the future.

Simply put, a three-dimensional climate model is a computer programme that simulates the interactions of the atmosphere, oceans, land surface, and ice.

Q: Would you say that integration and academic exchanges between Cuba and the rest of the Caribbean have been strengthened as a result of the training and the regional use of this modelling system?

A: From the start we have promoted the use of PRECIS in the rest of the region, not just in Cuba. So as strong ties were already being forged with the Caribbean Community Climate Change Centre (CCCCC) and the University of the West Indies, we all agreed that Cuba would be the hub of the training workshops for the application of the climate model.

Experts have come from countries in the region, and from South American nations as well, like Peru. 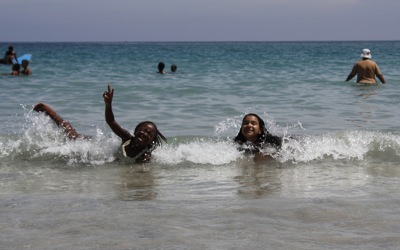 The rise in sea level will be a problem in the not-so-distant future. Credit: Jorge Luis Baños/IPS

As time went by, some of them continued, while others didn’t. But the base has been the CCCCC, which was created by an agreement between the heads of state of the Caribbean Community (CARICOM) to coordinate the Caribbean region’s response to climate change, and whose budget is not financed by governments, but depends on projects.

Cuba does not belong to the CCCCC because it is not a member of CARICOM. However, we have a strong link with the organisation, which has allowed us to get together and share experiences, results and even frustrations when something has gone wrong for someone. That is how we have moved forward.

Q: Can this effort be seen as part of an early warning system?

A: Not really, because an early warning system works with a more immediate timeframe. What we are doing is producing information to facilitate the adoption of actions to reduce impacts in the future and adapt to climate change.

In other words, this body of information can enable decision-makers to start thinking today, and to implement options that curb or minimise the impacts of climate change. Analysis of this information and the conclusions that science can contribute will undoubtedly help us move in that direction.

Q: Which Caribbean island nations could be especially vulnerable to climate change?

A: Well, vulnerability has variables that are not physical, but social and economic in nature, because they depend on the level of development. For example, the case of Haiti is terrible. 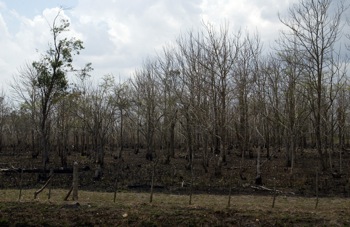 Size also matters. It is unlikely that one single tropical cyclone will have an impact on Cuba’s entire territory, but if it passes over any of the small islands, it can destroy everything. Sometimes a storm is bigger than the island itself.

In terms of physical factors, we have observed certain differences with respect to future rainfall patterns.

In some parts of the Caribbean, climate models clearly indicate that rainfall levels will fall – in other words, there will a big impact on water sources. But in other areas, climate modelling does not point to that with such intensity.

In the case of an increase in temperatures, there is basically no difference from area to area – in other words, temperatures will significantly rise everywhere.

The results that we see indicate that by the late 21st century, let’s say by 2080, the temperature could be up to four degrees higher, and there are estimates that by 2050, it could rise by approximately two degrees.

The models also show that, in the not-so-distant future, like 2020 or 2040, temperatures could be at least one or two degrees higher in this region.

Q: Summing up, what are the biggest challenges faced by the Caribbean island nations with respect to climate change adaptation?

A: In my opinion, the rise in sea level is the biggest challenge we could face, followed by drought.

Q: What does the scientific community recommend in these cases?

A: First, not to wait; to start acting now. I think Cuba is an example in this. Decision-makers here created facilities for and strengthened the research processes, which can provide information to indicate which direction things are heading in and what can be done. The most important thing is that we are listened to.

A recent example of this is that the president himself, Raúl Castro, urged that the possible scenarios be studied, such as what it would mean for the country if the sea level rose by 50 centimetres or one metre – what would happen to the natural resources in coastal areas, the beaches, and human settlements.

There is also concern for the water sources, what would happen in the coastal areas that are most important from a socioeconomic point of view, because although there are many human settlements, they do not all have the same importance.