JOHANNESBURG, May 8 2012 (IPS) - The cost of maintaining and expanding water infrastructure in southern Africa is high. And while South Africa may be in a better economic position than the rest of the region, it also faces funding challenges that are similar to those of its neighbours. 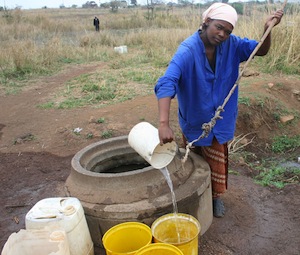 Getting water is a daily chore for this woman in Swaziland. Credit: Mantoe Phakathi/IPS

Most recently, thousands of residents in Diepsloot, a large township in South Africa, had to queue for hours to access clean, safe water after their supply was contaminated by sewage. In addition, the country’s Water Affairs Ministry announced in April that it was 56 percent short of the 71 billion dollars that it needed to upgrade its water infrastructure.

But the situation is no different elsewhere in the region, according to Phera Ramoeli, Senior Programme Officer at the Southern Africa Development Community Secretariat.

“Effectively the region needs to do a lot of work in terms of improving its infrastructure, because water supply and sanitation are dependent on the availability of water as a source. But sanitation also affects the usability and quality of water if it’s not properly dealt with,” Ramoeli said.

He added that infrastructure, especially in the water sector, is expensive. “We do not always find enough financial resources to build new infrastructure, to maintain existing infrastructure, and to operate them in a way that is efficient,” he said.

Q: What challenges do countries in the region face in terms of providing safe and clean drinking water to their populations?

A: We do not have adequate infrastructure to handle water and treat it to make it available to all our people in the region. Even with the infrastructure that does exist, we have a problem of operation and maintenance. By and large the population in our region is not commensurate with the level of infrastructure development that is required to ensure that people get the adequate water and sanitation that they need.

Q: How much of a role has climate change played in the region’s water woes?

A: Climate change is making things worse in the southern African region because we are a region that is characterised by vulnerability and change. In other words, water varies in terms of its availability in time and space.

Some parts of the region do not have adequate water or have very little water. The countries in the southwestern parts of the region are more water-stressed than those in the northeastern and some central parts, like Zambia and the Democratic Republic of Congo (DRC). Climate change tends to exacerbate the water problems; so does population growth.

Q: How committed is the region to meeting the United Nations Millennium Development Goals (MDGs) to provide adequate water and sanitation to all by 2015?

A: Efforts are being made to meet the MDGs. Some of the countries in the region have already achieved that but for only 50 percent of the population. The population does not remain stagnant as you try to achieve the MDGs, so the population still grows and it becomes an unreachable target. But of course that means we need to make more of an effort.

Q: Can you name a few of the countries that are well on track to meeting the MDGs?

A: It has been said South Africa is on target to meet the MDGs and maybe other countries like Mauritius, which already has 99 percent access to water and sanitation. Of course you have to look at the quality of that access, but by and large there are countries in the region that are set to meet the MDGs.

Q: Which countries are struggling to provide clean drinking water and sanitation for all?

A: We have a number of countries that remain poor in the region. Madagascar is a country that has been facing difficulties, and the DRC and maybe Angola – because the country was involved in a war that made things even worse. In those countries the backlog that they have to erode is much greater than the ones in other countries in the region.

The region is really trying its best to achieve access to water for all people. Of course it is something that is going to take some time, but it needs to be addressed urgently.