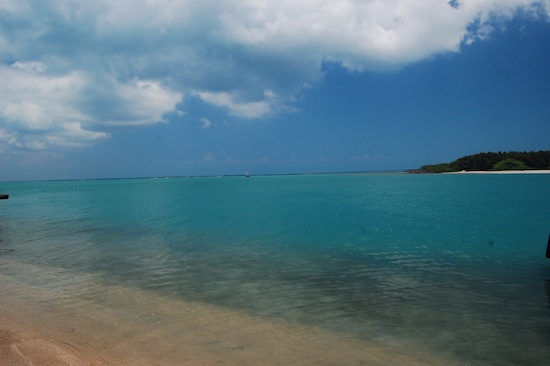 A glimpse of seagrass close to the seashore of the Gulf of Mannar Marine National Park, which is home to a spectrum of marine wildlife Credit: Malini Shankar/IPS

RAMESHWARAM, India, May 2 2012 (IPS) - Forest officials of the Gulf of Mannar Marine Biosphere Reserve abutting the Palk Straits between India and Sri Lanka have reported a decline in marine wildlife, as smugglers exploiting lax conservation laws in the region tank up on protected species used in traditional Chinese medicines and fine dining.

In coordination with the Indian Coast Guard, forest officials have recorded more than 200 cases of smuggling, accounting for the loss of over 13,000 kilogrammes of sea cucumbers (Holothurian scabra) and seahorses (Hippocampus species) in the last 16 months alone.

Illegal marine wildlife traders in India smuggle their catch to neighbouring countries like Sri Lanka and Bangladesh, where the red-flagged items become legal marine exports to other Southeast Asian countries due to exemptions in the Convention on International Trade in Endangered Species (CITES).

Around the same time as this classification came into play, the markets for traditional Chinese medicines exploded.

More than 2000 species of fin fish are found in the Gulf of Mannar and seagrass is also clearly visible in the shallow sea. Prosopsis jujuba, a shrub forest species endemic to dry arid zones, “is surprisingly dominant in the mangroves and mud flats, amply justifying the protection lent to the marine national park,” Sundar Kumar, the wildlife warden of the underwater reserve, told IPS.

“The hotbeds and kingpins of marine wildlife crime are in Rameshwaram, Mandapam, and Tuticorin all around the Indian coast of the GOMMNP,” T. Rajendran, assistant conservator of forests for the marine reserve, told IPS.

“There is no local consumption or markets (for smuggled goods). Only the middlemen gain. These are the (people) who are connected to international crime syndicates,” added Niraj. These ‘middlemen’ buy sea cucumbers from fisherfolk for about 50 dollars per kilogramme and sell them for a profit of 600 percent, at 307 dollars per kilogramme.

“Sea cucumbers have ecologically significant roles in scavenging coasts and seabeds, which in turn helps other species like corals and seagrass to flourish and propagate,” Niraj explained.

“Only owners of trawler fishing boats indulge in poaching sea cucumbers, which is a double whammy for us traditional fishermen; not only is the catch depleting, but fuel prices are increasing. The additional burden of illegal poaching of marine wildlife by trawler fishermen make us suspect in the eyes of the enforcement agencies,” lamented K. David, a traditional fisherman in Rameshwaram.

Field director Niraj disputes the fact that trawler fisherfolk are the only smugglers involved in this rackets, pointing to statistics of recent raids that show traditional (Dinghy) fishermen also indulging in the smuggling of sea cucumbers and seahorses.

David is convinced that traditional fishing will come to an end when his generation is “dead and gone”, since youngsters like 10-year-old Vishal Selvan and 11-year-old Alan want to become merchant navy captains and Indian Administrative Service officers respectively.

In order to keep traditional fishermen from engaging with smugglers out of economic desperation, employment schemes have been put in place to guarantee the livelihoods of various fisherfolk, in the face of depleting fish stocks.

“We are as yet unable to trace the route of smuggled goods and links beyond Sri Lanka to markets in the Far East, primarily because once the goods arrive in Sri Lanka they become legal exports, blocking our investigations further,” explained a wildlife crime inspector, speaking under condition of anonymity out of fear for his safety.

Patrolling the sea is all the more challenging given enforcement agencies’ meagre logistical capacity.

They lack night vision lamps and financial incentives. They are no match for the 25,000 well equipped trawlers that fish illegally across the whole Marine Biosphere Reserve every day.

Still, the greatest challenge is not out on the water.

“Opposition to protection of marine wildlife (and) fishes comes from even official establishments like the Central Marine Fisheries Research Institute, the Marine Products Export Development Authority and the National Institute of Oceanography – all in the name of livelihoods,” Niraj said.

“Growing numbers of anthropologists propagate illusions glossing over the likely consequences that would emerge should we lose the remaining biodiversity… They quote the Convention on Biological Diversity where sustainability, right to access and benefits sharing are the guiding principles. However, sustainability that applies to economic principles may not exactly apply to ecology because of biological principles that are very different,” Niraj explained.

Poaching of sea cucumbers even in the seas around the Andaman Nicobar Islands is so rampant that natives report they hardly sight sea cucumbers anymore.

*Malini Shankar is a wildlife photojournalist and filmmaker based in Bangalore.