BANGKOK, May 23 2012 (IPS) - From its imposing 14-storey building, Thailand’s criminal court hands down verdicts that rarely trigger a backlash. Those condemned to long imprisonment include Thais who supposedly violated the draconian lese majeste censorship law that protects this Southeast Asian country’s monarchy. 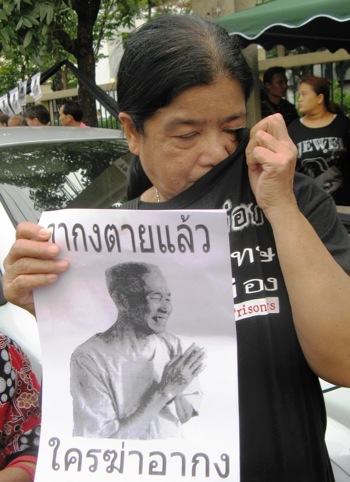 A mourner holds a picture of Ampol "Akong" Tangnoppakul at a protest outside the Thai criminal court. Credit: Marwaan Macan-Markar/IPS

A harsh contempt of court law, threatening violators with seven years in jail, has guaranteed the judges immunity. The fear it has unleashed in the public has enabled Thai judges to “enjoy being untouchable”, local human rights campaigners here have said.

But that privilege is now in the line of fire, as a growing number of Thais are placing their fear of the courts aside to rail against the judiciary.

The catalyst to this latest bout of opposition was the death on May 8 of prisoner Ampol “Akong” Tangnoppakul, a 62-year-old grandfather who was sentenced to 20 years last November in a controversial censorship trial, which evoked the Computer Crimes Act (CCA).

The court has been pilloried on two counts. Firstly, for delivering one of the harshest verdicts against Akong, despite inconclusive proof, for allegedly sending four text messages deemed insulting to the royal family; and second, for denying this “prisoner of conscience,” according to Amnesty International, eight bail appeals to seek medical treatment outside the prison for liver cancer, the eventual cause of his death.

The 100-year-old lese-majeste (LM) law, in the penal code to protect the dignity of the royal family, condemns a violator to a maximum of 15 years in jail for a single act or expression viewed by courts to have defamed the King, Queen, heir apparent or regent.

And since the last coup in 2006, the 18th putsch by the powerful military, a junta-backed national assembly approved the CCA, which threatens five years in jail for every violation.

Since Akong’s death, a tide of anger against the criminal court has surfaced on blogs and social networking sites, at a last rites ceremony in the victim’s neighbourhood on May 16 and, most provocatively, outside the gates of the criminal court itself.

“Akong was an honest man; he didn’t get justice. And it was sad that he was denied health care,” said Kallaya Wilaipie, a 48-year-old mother of two, echoing views shared by others residents of the Thai capital who joined the protests outside the court. “What happened to him was unfair.”

Netizens have been even harsher in their comments, with some messages pointing an accusing finger directly at the court for Akong’s death, according to Kwanravee Wangudom, a lecturer at the Institute of Human Rights and Peace Studies at Mahidol University, on the outskirts of Bangkok.

“People have been saying that he died because he was denied the right to bail for his health,” she told IPS. “(Thus) the fear of contempt of court is being challenged.”

Such sentiment became even more daring when the body of the deceased was brought to the gates of the court this month for a Buddhist funeral rite, an unprecedented act of protest. Six monks in saffron robes chanted by the side of a closed coffin during the evening event, which drew close to 1,000 people.

“In the aftermath of Akong’s death, Thai courts have come under open public scrutiny and criticism as never before,” said David Streckfuss, a U.S.-based academic who has written extensively about the LM law. “The public are venting their anger about the weak evidence against Akong during his trial, the presumption of guilt on the part of the court and the incredibly heavy and disproportionate sentence.”

“Even the cavalier attitude the court expressed concerning Akong’s health, dismissing such concerns, has fueled this rage,” added Streckfuss, author of ‘Truth on Trial in Thailand – Defamation, Treason and Lese-Majeste’.

“It is unlikely that such criticism will stop,” he told IPS. “This development could end up defining the future trials for LM or CCA cases.”

Of Thailand’s many political fault lines, the one shaped by these draconian censorship laws is the most sensitive. The country’s entrenched elite, which draws its strength from the military, the bureaucracy, and ultra-royalist figures, has been criticised by a growing chorus of academics and political activists for using the LM law as a tool to stifle dissent and debate.

Among those found guilty of violating Article 112 in recent years are political activists Daranee Charnchoengsilpakul, who was sentenced to 15 years behind bars and Surachai Danwatthananusorn, who was handed a seven and half year jail sentence.

The high-profile trial of Somyot Prueksakasemsuk, a trade union leader and editor of a banned magazine, and the CCA trial of Chiranuch Premchaiporn, the executive director of ‘Prachatai’, a popular alternative news website, both attracted international attention.

The 50-year-old Somyot, who has also been denied nine bail requests for medical attention, could be condemned to 30 years in prison if the courts rule that two articles published in his defunct Thai- language journal violated the 112 law.

The 46-year-old Chiranuch could be condemned to 50 years in jail for failing to immediately remove 10 ‘defamatory’ messages that had been posted on her website’s message board.

But Akong’s death has now cast a shadow on these trials, since he is the first victim of the LM law to have died in prison in recent memory.

“He was coerced into martyrdom by an unjust law and the acquiescence of Thais who either succumb to fear or thrive on repression,” Thitinan Pongsudhirak, a political scientist at Bangkok’s Chulalongkorn University, told IPS.