MÁLAGA, Spain, Jun 6 2012 (IPS) - Arrayed in colourful garments they have made themselves, six teenagers who used to be street kids in Fortaleza, in northeast Brazil, visited this southern Spanish city to recount their life experiences and awaken solidarity.

“If I hadn’t been rescued off the street, I would have been marginalised and fallen into a life of prostitution and drugs,” Jonatan, a former street kid, told IPS.

Now 21, for the last four years Jonatan has been participating in programmes at the Associação de Solidariedade aos Meninos e Meninas de Fortaleza (ASMMF – Association for Street Children in Fortaleza), a city of 2.5 million people ranked as the fifth most violent in Brazil.

Tall and slim with long, straight hair, Jonatan has completed a sewing course and is now studying physical education in Brazil thanks to sponsorship from Spain. 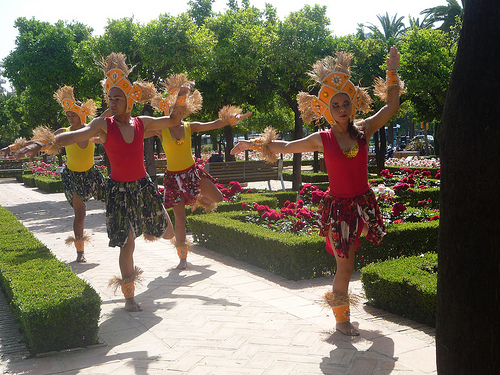 Teenagers who had a tough childhood in northeast Brazil perform Afro-Brazilian dances in Málaga. Credit:Ines Benítez/IPS

The Brazilian organisation also opened doors for Jonatan’s first job as a dance teacher, and today he is educating other vulnerable children and young people.

The ASMMF was created 20 years ago, and for the last 17 years it has been in partnership with the Asociación Niñas y Niños de la Calle (Street Children Association) of Málaga, which organised the recent three-week visit to Spain of the group of young Brazilians from the Fortaleza project to perform traditional folk dances.

This is the latest of a series of visits, some of them paid for by public funding, by the young beneficiaries of the work of the two partner associations, whose mission is to empower and give training to teenage victims of sexual exploitation, single mothers and transvestites in extreme poverty, and support them in getting a job.

The young people, between the ages of 13 and 21, returned to Brazil May 30 after giving 27 performances of traditional dances in the space of 20 days, in schools, cultural centres, the premises of civil society organisations and the Málaga town hall, for a total of 5,000 spectators.

“The aim is to show how dance has helped to change their lives, and to raise awareness among the people of Málaga,” Mario Almeida, a Brazilian educator working for the Málaga association, told IPS.

Regina Mesquita, the Brazilian coordinator of the Fortaleza project, told IPS about the enormous social divide and the structural violence in the teeming city, “where girls and boys as young as nine turn to prostitution to earn money for their families.”

As a consequence of the sexual exploitation, many children and adolescents become illegal drug users, “often as a means of making their life more bearable,” said Mesquita, who warned of increased numbers of cases of sexual abuse, rape and murder.

The young people have found in dance and music an escape from the problems of dysfunctional families in the favelas or shantytowns. They make their own costumes for the performances, as part of a job-training workshop for producing handmade clothes.

In 1997, the Fortaleza association opened a day centre called Casa de Andaluzia (Andalusia House) where children can come once they have been contacted on the street. They are encouraged to participate in educational activities, alternative literacy training, sewing workshops or the dance group “Estrelas da rua” (Street Stars).

In the last 17 years, some 400 young people have participated in the sewing workshops, and thousands have passed through the ASMMF project, the head of the Málaga association, Belén García, told IPS. She said 90 percent of those who attend the sewing courses leave the streets.

She also said 30 percent of those who take part in Casa de Andaluzia programmes find jobs, and between 40 and 50 percent go back to school.

Casa de Andaluzia, a two-storey building, has four teachers, whose efforts largely target girls who work in, or are at risk of falling into, child prostitution.

“During this visit we have been able to secure sponsorship for all six of the young people so that they can complete their studies in Brazil,” the sponsorship coordinator in the Málaga association, Irene García, told IPS.

At present around 20 girls and boys in Fortaleza are sponsored through the Street Children Association of Málaga. Some live on the support they receive, and others use it to pay for university or professional studies, the association’s web page says.

“For me, dancing is like salvation. If I didn’t dance, I would be lost on the streets. It has changed my life,” said 19-year-old David, who has been going to Casa de Andaluzia in Fortaleza for a year now, and has been a keen dancer since he was seven, because he “loves it.” He told IPS that the association has helped him become less shy and more mature.

Mesquita said the ASMMF uses dance performances as a bridge to establish contact with children on the street. The kids who are attracted to it start coming to dance classes and later move on to workshops where they learn to make handcrafted clothing.

She described the huge demand for the sewing workshops: 500 applications were received for the last course, which had room for 40 participants. The teaching team at the centre, consisting of educators and social facilitators, are nearly all women between the ages of 20 and 40.

The goals are to get the children to stay in or go back to school, build their self-esteem, provide training and offer them opportunities to join the labour market, said Mesquita, who stressed that “it’s a slow process, one step at a time.”

“There’s a lot of violence on the streets, including muggings and fights,” said 16-year-old Bianca, who has belonged to the association’s dance group for the past year. “I went to watch a rehearsal, and I really liked it,” she told IPS.

The association also works with younger children in the favelas of Fortaleza, where the educators hold monthly meetings.