Some Nurses Take Flight, Others Take to the Streets 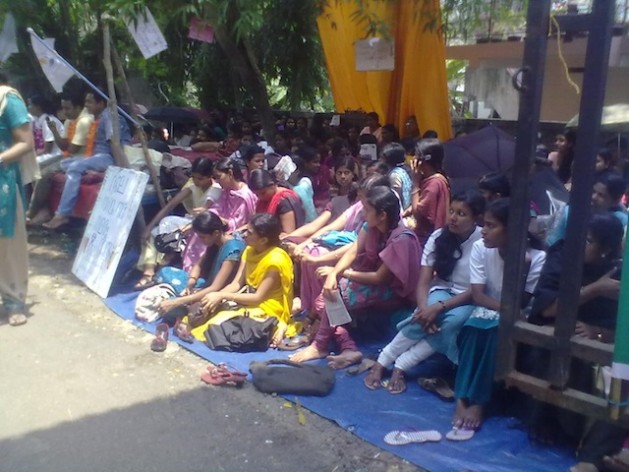 Nurses taking to the streets demanding fair wages is now a common sight in many Indian cities. Credit: K.S. Harikrishnan/IPS

THIRUVANANTHAPURAM, India , Jun 28 2012 (IPS) - Nurses in India are up in arms against the deterioration of the nursing profession in the country, including unfair wages and the policies of private hospital managements.

Many exploited female nurses are leaving the country in droves, migrating to countries that offer better employment prospects and working conditions.

Those that remain are taking to the streets, demanding decent pay and the enforcement of labour regulations.

For two years now, thousands of nurses working in corporate hospitals across the country have been participating in demonstrations and strikes, protesting the fact that hospital managements – often alleged to have illegal connections with politicians and bureaucrats – blatantly flout the country’s labour laws.

Nurses’ unions say that the strikes in various private hospitals are a result of long-standing grievances like poor working conditions and mistreatment of nurses in the workplace.

Jasmin Shaw, president of United Nurses Association, told IPS that threats of dismissal, disconnecting power and water connections in hostels, threats of eviction from hospital dormitories and violation of labour norms were some of the most frequent complaints to be heard as the strike spread across the country a few months ago, fanning outwards from Mumbai and New Delhi into other parts of the country.

Studies point out that working condition, though better in government hospitals, are by no means favourable to nurses, who describe their duties as “back-breaking”.

The most basic amenities – such as rooms in which nurses can rest and change their clothes – are missing in most hospitals.

A report on nurses’ working conditions in the Indian capital, published by the New Delhi-based Centre for Women’s Development Studies (CWDS), revealed that the nurse-patient ratio was generally 1:30, sometimes reaching 1:50 in general wards.

This shortage often results in nurses having to work overtime, for which there is no formal system of compensation; though the prolonged protests have prompted some hospitals to announce that they are taking measures to pay overtime wages.

Dr. Sree Lekha Nair, researcher at CWDS, told IPS that a servant–master relation had become an established practice in the country’s nursing sector.

“Hospital managements are confiscating nursing certificates in order to restrict nurses’ professional mobility. When they start work they have to sign a “bond” that requires them to work in the hospital for two to three years.

“These measures prevent nurses from seeking job opportunities without the knowledge of the management. One of the most difficult challenges of the nursing profession in India has been in the realm of collective organising for rights,” she added.

Anie Mathew, a health sector activist in Jaipur, Rajasthan, said that junior nurses in the corporate sector were being treated badly and given meager salaries.

“Nursing aides and auxiliary nurses can be paid just 1,000-1,500 rupees (about 26 dollars) a month and are made to perform duties like giving injections for which they are not trained.”

“Managements do not follow regulations regarding leave packages. Maternity leave is not allowed. The moment a nurse reports her pregnancy, she can be asked to leave,” said Mathew.

There is a widespread feeling among nurses that medical tourism hurts the freedom of speech, which is guaranteed by the Constitution of India.

Nurses allege that sponsors of medical tourism strictly enforce the rule that nurses cannot speak in their mother tongue while on duty.

“A five-star hospital culture in New Delhi and Mumbai restricts nurses’ freedom to speak their own native language, which is unacceptable,” said Shaw.

The Indian medical tourism sector is expected to experience an annual growth rate of 30 percent, set to become a two billion-dollar industry by 2015.

An estimated 150,000 people are traveling to the country to avail themselves of low-priced healthcare every year.

Experts say that a strict hierarchy of gender and class, entrenched in Indian society, has also contributed towards the present status of the nursing profession.

Analysing contemporary concerns of status among nursing professionals, Madelaine Healey, an independent researcher from Australia, and Sri Nair, a sociology scholar in Thiruvananthapuram, explained that those in the nursing society were often looked down upon by those from a ‘domiciled European’ background, who were often the children of merchants or businessmen.

“These women nurses were considered wanting not only in their class backgrounds, but also professionally, as the training they received in India was considered inferior to that on offer in the West,” the researches found.

Experts in migration studies point out that the promise of higher income was the main reason for migration and there was no exact number on how many nurses had migrated to foreign countries.

“Now girls are showing more interest in studying nursing while looking at the lucrative salaries and other perks along with high quality of life abroad. The majority of migrant nurses are from the southern Indian state of Kerala,” Prof. Irudaya Rajan, head of the migration department at the Centre for Development Studies in Thiruvananthapuram, told IPS.

According to a recently released book, ‘Moving with the Times: Gender, Status and Migration of Nurses in India’, authored by Sree Lekha Nair, nurses from Kerala form one of the largest groups of migrant women workers in the international service sector along with Filipinos and Sri Lankans.

Comparatively better salaries, work opportunities and financial independence, along with a desire to travel across the world, are often the reasons behind this wave of migration.

Many women appear to be entering the profession with the sole intention of migrating abroad; finding employment in Delhi is intended simply as a transition to leaving the country, a trajectory that may remain unrealised, Nair’s book revealed.

A senior health official in Chennai told IPS that that the Indian health sector is facing a 50 percent shortage of nursing staff.

“The mass migration of nurses leaves already (under-staffed) hospitals with a shortage of trained nurses and exacerbates the poor nurse-patient ratio,” she added.