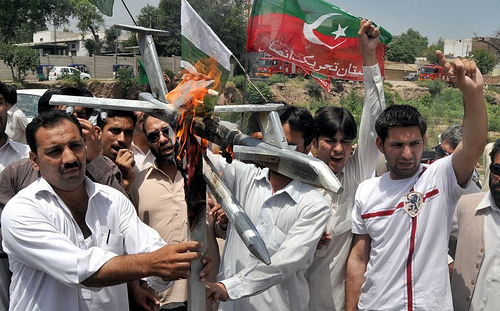 Members of PTI party protest US operation in Abbottabad, near Peshawar Press Club on May 14. Credit: Ashfaq Yusufzai/IPS

According to the non-profit Pew Research Center, nearly three-quarters of Pakistanis today “consider the U.S. an enemy”. That number has risen repeatedly over the past several years, from 64 percent in 2009 to 69 percent in 2011 to 74 percent in 2012.

Just eight percent of Pakistanis say they view the U.S. as a partner.

Further, the report, released on Wednesday, notes that a full 35 percent of respondents said that improving relations with the United States is unimportant, up 13 points from last year.

These figures stand in stark contrast to the Pew’s findings on how Pakistanis view China. Nearly 90 percent of those polled saw China as a partner, and just two percent as an enemy.

The view of the U.S. is even more critical than that of India, Pakistan’s traditional nemesis. A full 22 percent reported having a favourable view of India, up from just 14 percent last year.

More importantly, even as a majority (59 percent) name India as Pakistan’s greatest threat – well more than the Taliban (23 percent) or Al-Qaeda (4) – nearly two-thirds of Pakistanis say that it is important to improve relations with India. A similar number support greater bilateral trade and continued talks between the two countries.

For many observers, it is hard to see these numbers as anything but a repudiation of President Obama’s policies in Pakistan.

Only 17 percent, for instance, back U.S. drone strikes, a programme that has massively expanded under President Obama.

Despite Obama’s stated – and largely successful – aim of improving the view of the United States around the world, “Pakistan is the only country where ratings for Obama are no better than the ratings President George W. Bush received during his final year in office,” according to another Pew report released in mid-June.

Beyond the drone issue, much of Pakistani public perception of the U.S. is driven by U.S. foreign aid to the country, both military and civilian – particularly the breakdown between those two.

In October 2009, months after President Obama took over power, the U.S. Congress voted to triple civilian assistance to Pakistan, amounting to some 7.5 billion dollars through 2014.

This constituted a significant turnaround from the approach of the previous decade – since the attacks of Sep. 11, 2001 – under which U.S. military assistance in Pakistan was double the civilian funding.

According to a new report released on Wednesday by the International Crisis Group (ICG), a watchdog based in Brussels, “Lopsided focus on security aid after the 11 September 2011 attacks has not delivered counter-terrorism dividends, but entrenched the military’s control over state institutions and policy, delaying reforms and aggravating Pakistani public perceptions that the U.S. is only interested in investing in a security client.”

Thus, the 2009 bill’s goal, as supported by President Obama, was to significantly increase U.S. support for civilian institutions.

Yet in fact, ICG’s researchers note, the attempt to diversify away from a security-heavy budget has not lived up to the initial plans. Thus far, the goal of providing 1.5 billion dollars per year has fallen short by around a third, by 414 million dollars in fiscal year 2011 and by an estimated 500 million dollars in FY2012.

In fact, during that time, the United States’ civilian foreign-aid agency, USAID, has reportedly begun to cut back on its Pakistan programmes.

Further, ICG warns that the space in which USAID, as well as international and Pakistani NGOs it funds, has to work has been “shrinking as a result of the Obama administration’s aid policy”.

Meanwhile, the Pakistani military, supported by the civilian bureaucracy, is said to have strengthened its oversight of aid delivery.

Still, while the deteriorating bilateral relationship has led U.S. lawmakers to call for a significant – or complete – reduction in assistance for Pakistan, ICG cautions against retaliatory cutting of development funding.

“Re-orientation of funding from military security purposes to long-term democracy and capacity building support is the best way to guarantee the West’s and Pakistan’s long-term interests in a dangerous region,” the report concludes. “But aid policies must be better targeted, designed and executed.”

Indeed, according to the Pew report, around four in 10 Pakistanis view both U.S. economic and military aid as “mostly negative”.

Turning that around, ICG suggests, will entail looking beyond the inherently short-term view of a security mindset, including giving USAID “a greater say in devising foreign policy development goals and reset(ting) the priorities of civilian assistance to focus on democratic strengthening, capacity building, economic growth and civilian law enforcement.”

Such policy prescriptions are echoed in a new open letter, released last week, sent to the U.S. State Department from Nancy Birdsall, the president of the Center for Global Development, a think tank here in Washington that has been tracking the U.S.-Pakistan relationship in the aftermath of the 2009 legislation.

Birdsall writes that, in formulating aid packages for Pakistan, Washington officials need to adopt “a greater emphasis on elements of the machinery of democracy that are independent of government”.

In a nod to the Pew’s findings, ICG also suggests allowing local organisations to decide how and even whether to publicly trumpet a project’s links to USAID.