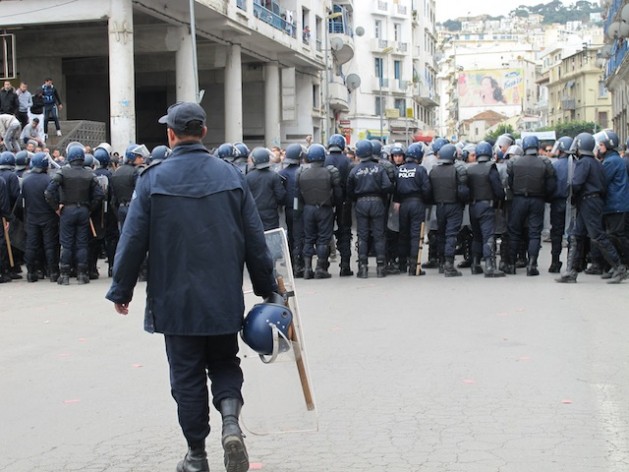 A crowd of police at street demonstrations in Algiers on Feb. 19, 2011. Credit: Giuliana Sgrena/IPS

ALGIERS, Jun 20 2012 (IPS) - The on-going hunger strike of nine Algerian court clerks, coupled with the government’s indifference to their demands for an independent labour union, have stirred debate about Algeria’s role in the Arab Spring, which many see as an incomplete attempt to overturn a deeply flawed political and economic system.

Despite the fact that the health of the six women and three men, who have been fasting for over a month now, are deteriorating rapidly, neither the government nor the justice ministry has shown any indication that they will meet the workers’ demands.

“The health conditions are getting worse every day, three women are now in the Rouiba hospital; all of them have lost ten percent of their weight, and suffer from pain in their muscles and bones,” Nassira Ghozlane, chairwomen of the Autonomous National Trade Union of Public Administrations Workers (SNAPAP), told IPS.

“Also doctors are being pressured by authorities (the government) that want to minimise the impact of the hunger strike,” she added.

The justice workers started their protest last February, after the Minister of Justice failed to implement an agreement to improve working conditions. To make matters worse, the government still prevents workers from organising independent unions to advocate for their rights.

Nevertheless the clerks decided to create their own trade union affiliated to the independent SNAPAP.

These striking clerks are just one example of nation-wide discontent, that is daily manifest in strikes and protests around the country.

Thus many are curious as to why the wave of dissent, which began in earnest early last year, has failed to yield results in a country that offers fertile ground for resistance.

Following the now landmark act of self-immolation that sparked the Arab Spring in Tunisia, the practice spread through Algeria as well. Meanwhile opposition parties, unions, human rights organisations and bloggers united to form the National Coordination for Democracy and Change (NCDC) to organise rallies every Saturday.

“The slogan under which protesters rallied was ‘Systeme Dégage’ (System Go Away) not only ‘Bouteflika (referring to Algerian President Abdelaziz Bouteflika) Dégage’, because people knew that even if the president were to leave, nothing will change as the whole system is corrupted,” Nadjet Rahmani, one of the protesters, told IPS.

But protesters suffered a brutal crackdown, with 30,000 policemen and riot police surrounding the location of a May 1 demonstration and arresting numerous people last year.

Though government repression was swift, some observers believe the failure of the Algerian Spring is due more to memories of terror that still haunt the masses.

“We already had our revolution back in 1988. Although it was called the ‘couscous revolt’ (in reference to critical food shortages at the time) it was also a revolution for social justice, against the one party system, for democracy,” Cherifa Kheddar, chairwoman of Djazairouna (Our Algeria), an association of families of terrorism victims, told IPS.

“It was organised by trade unionists and activists, who were all put in jail and tortured. So the streets were occupied by Islamists, as (was the case) with the Tunisian and Egyptian revolts,” she added.

Elections following the 1988 revolt resulted in the victory of the Islamic Salvation Front. The Algerian army, supported at the time by large swathes of the population including women’s groups who rightly feared the outcome of an Islamic party victory, interrupted the election and opened the floodgates to a period of bloodshed in the country that claimed 200,000 lives.

Both the army and the Armed Islamic Groups (GIA) were responsible for the massive human rights violations that marked this dark period of Algeria’s history, in which 40,000 people were disappeared.

The Islamists clung to power for a year but even after they were ousted in 1992 they continued to threaten and kill anyone considered to be a non-believer – soldiers, politicians, women, intellectuals, teachers, hairdressers.

The period of terror only ended when then-president Bouteflika declared a national reconciliation programme that failed to persecute human rights violators or bring perpetrators of grave crimes to justice.

Exhausted by the wave of bloodletting, a majority of Algerians supported the presidential proposal, which effectively destroyed any substantial opposition for years to come.

As a result, the same tensions that plagued the country a decade ago are still very much alive today, with Islamists and secular people living side by side in simmering hostility.

Added to these old wounds are the issues of corruption, low salaries, inadequate housing and unemployment, which is particularly high among the country’s youth.

Meanwhile, the Algeria government is using covert methods of warding off dissent, particularly the kind aroused by economic dissatisfaction.

Consistently high oil revenues suggest that by the close 2012 the foreign revenues fund will amount to some 205.2 billion dollars.

Currently, Algeria is producing 1.2 million barrels of oil per day, but “our capacity is 1.4 million barrels, and (could) reach 1.5 million in a few months,” said Algerian Energy Minister, Youcef Yousfi, in a summit in Kuala Lumpur on Jun. 7.

Thus the government has been able to allocate enough money towards employment-generating schemes, better housing, and social services in an effort to ward off social unrest.

State-owned companies have created enough new opportunities to bring unemployment down to 9.8 percent from 11.3 percent in 2008, according to national statistics, though the youth unemployment rate stands stubbornly at 20 percent.

The government also allocated funds towards new public housing and increased state salaries across the board, just prior to the May 10 elections.

“Of course there is not a fair redistribution of the oil revenue, as we asked for in the demonstrations; rather, (national) wealth is being used to avoid a worse situation that could provoke a revolution or a revolt,” Djamal Hammoune, a human rights activist, told IPS.