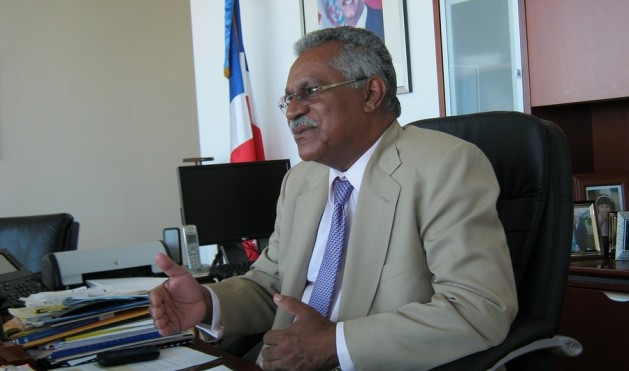 SANTO DOMINGO, Jul 7 2012 (IPS) - The protection and conservation of biodiversity figure among the most daunting challenges posed by climate change in the Caribbean islands, home to a wealth of endemic species of flora and fauna.

The Caribbean Biological Corridor (CBC), an initiative spearheaded by the Dominican Republic, Cuba and Haiti, with the support of international cooperation agencies, offers an opportunity for joint projects that will benefit biodiversity not only within their own borders, but in the Caribbean region as a whole.

In an interview with IPS, Ernesto Reyna, minister for environment and natural resources in the Dominican Republic, described the CBC initiative as a strategic alliance of essential importance for small island nations threatened by climatic variations, such as an increase in average temperatures and rising sea levels.

Increasingly severe storms, droughts and floods are also predicted for the region, posing a serious threat not only to the populations of Haiti and the Dominican Republic but also to their flora and fauna, which include numerous threatened and endangered species.

“Given the experience of Cuba, the difficult situation in Haiti and the interest shown by the Dominican Republic, we could say that this partnership among the three sister nations is a prime example of what can be done to promote the conservation of natural resources,” he said.

Reyna says that Jamaica, Puerto Rico, Guadeloupe and Martinique have expressed interest in participating in the process as observers and guests, and could eventually join in as full partners in the biological corridor, which serves as a sort of umbrella initiative for “practical action” projects.

The initiative provides a framework of cooperation for protecting natural resources and stemming the loss of biodiversity in the Caribbean region through environmental remediation and development of alternative livelihoods.

The CBC stretches roughly 1,600 km in length through the three current member-countries. In the Dominican Republic, it encompasses the Jaragua-Bahoruco-Enriquillo Biosphere Reserve and the Cordillera Central mountain range, up to the border with Haiti.

The CBC also encompasses a large area of eastern Cuba, including the Sierra Maestra mountain range, Baracoa, Nipe and Sagua. Cuban academic and researcher Nicasio Viña is the current director of the initiative established by the three countries in 2007.

While connecting the landscapes, ecosystems, habitats and cultures of the three Caribbean nations, the corridor also grants special status to more than 60 protected areas which can facilitate investment for development, poverty reduction and the restoration of natural areas heavily impacted by human activity.

According to United Nations Environment Programme (UNEP) figures, in the Caribbean islands there are 23.5 endemic plant species per 100 sq km, which is 3.4 and 12 times greater, respectively, than the density found in the Atlantic Forest of Brazil, the tropical Andes, and Mesoamerica, a region encompassing southern Mexico and northern Central America.

The promoters of the CBC stress that efforts to protect and conserve this biological wealth must include poverty alleviation for the people who live in these areas in order to reduce pressure on biological resources. For Reyna, one of the biggest challenges lies in restoring the trust of local communities.

For this reason, he believes in ensuring community participation in project activities as well as the involvement of local government structures, such as watershed administrations, so that plans are not shelved.

The European Union provides funding for the initiative which is also supported by UNEP.

Although it has been in existence for several years, the CBC has been “relaunched”, according to Reyna. “It is a forward-looking project that is now reaching out to the other countries of the region, and I think the time has come for it to fully take off,” he said.

Among the projects already underway as part of the initiative is the Plant Propagation Centre in Dosmond, near Ouanaminthe, in northeastern Haiti. The centre includes a greenhouse with room for 600,000 plants, a germinator, a warehouse, an office and a multipurpose space.

Environmental problems facing Haiti include deforestation – its forest cover has been reduced to less than two percent of its total land area – and soil degradation. The border area between Haiti and the Dominican Republic is exposed to extreme weather events that exacerbate the area’s communities.

A bilateral agreement supported by Norway through the United Nations Development Programme, in force since last year, is aimed at increasing forest cover and improving the living conditions of communities on both sides of the border.

In the Dominican Republic, “an ambitious reforestation plan has resulted in an increase in  forest cover from 12 percent in 1967 to 39.7 percent today,” said Reyna.

But the abrupt rise in recent years of the water level of Lake Enriquillo, on the Haitian border, has created new environmental challenges and caused the loss of large areas of farmland.

Residents of the area told IPS that there are now species living in Lake Enriquillo that had never been seen there before, including crabs and fish like ‘shad’ and ‘guabina’. “Here we have always fished for ‘tilapia’ and ‘biajaca’, which are freshwater fish,” commented José Trinidad, a farmer from the border village of Jimaní.