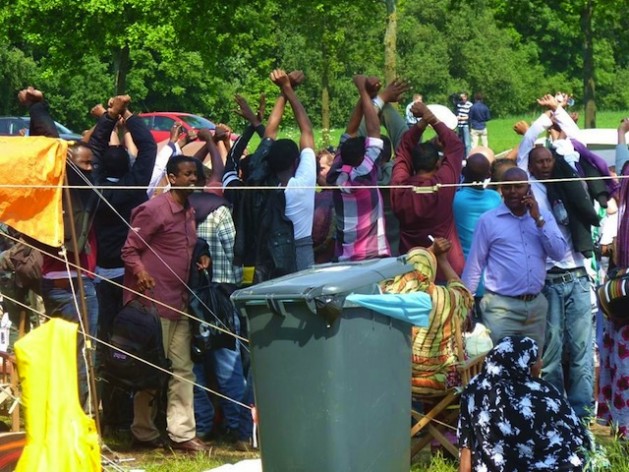 Protesting asylum seekers in Ter Apel in the north of the Netherlands, stretch ropes around them to show they are bound. Credit: Frank Mulder/IPS.

UTRECHT, The Netherlands, Jul 3 2012 (IPS) - Growing numbers of asylum seekers are being denied refugee status by the Dutch authorities, but cannot go back to their own country either. Forced removals are doing little to better the situation.

Groups of refugees have at times set up protest camps; the authorities have reacted by simply clearing the protesters away, declaring health and safety considerations. The protesters have been mainly from Iraq and Somalia, but also from Iran, Afghanistan, Eritrea, Ethiopia and Sudan.

Many Iraqis have accepted an offer by minister for integration Gerd Leers to go to an official refugee centre. But they are uncertain what next.

“We talked to his representatives,” said Hadi Abu Sanad, a spokesperson for the Iraqi protesters in Ter Apel in the north of the Netherlands. “The minister will do everything he can to send us back, he said. But we know that the Iraqi government will stick to its view that no one can be forced to be sent back to Iraq.

“And we will never sign voluntarily to return to our country. But we want to show we are not troublemakers. We have respect for the authorities, and we hope this helps them to find a solution for us.”

“Going to Iraq feels like deportation,” said Mustafa (not his real name), an Iraqi who speaks Dutch perfectly. “I am married to a Dutch woman, we have a child and we expect a second one. I have no place to go in Iraq and no reason to live there.”

Seyed (not his real name), an Iranian, is without hope. He finished the refugee procedure a year ago, without success. “I became a Christian in Iran and that created many problems for me. Everything is impossible for me there. I have been supported by a church for some months, but what can I do know? I don’t know. I have no future here because the government doesn’t believe I’m a Christian.”

The core of the problem is the so-called ‘return policy’ which is not realistic, said Anne-Els Jansen from Vluchtelingenwerk, the Dutch Council for Refugees.

“Many people who fail to get a permit are real refugees, who fear for their lives in their own country. They’ll never go back. Moreover, many people have been accepted temporarily, because their country was considered too dangerous.

“This was the case for many of the Iraqis in the protest camp. Their permit was not extended because the country is considered safe now. But some regions are still very dangerous. Every month 300 or 400 civilians die.”

When asylum seekers are officially denied refugee status, but don’t want to return voluntarily, they are simply in effect thrown out of the official asylum seekers centre.

“They are accompanied to the gate, sent to the street,” Jansen said. “But even people who do cooperate to return are often left on their own, for example because they can’t prove who they are or because their country is in war.

“That’s the problem of the Somalis in the protest camp. The authorities haven’t succeeded in sending one Somali back to their country, as a result of the civil war. It’s a scandal how the government treats them. They believe it’s the individual responsibility of the refugee to go back, but that’s impossible.”

Each year around 5,000 asylum seekers are “left with unknown destination”, as they are officially categorised. It’s not clear how many of them remain in the Netherlands. Many of them are arrested and detained now and then when the police find them, but usually they are released after weeks or months if deportation is still impossible.

This year the right-wing government has introduced a law to criminalise such so-called illegality. When someone has been ordered to leave the country, he is not allowed to be there any more. As a result, people who are found without a passport can be fined or imprisoned.

“The return policy is unrealistic and leads to hopeless people without any perspective,” Jansen said. “Everything is left to the individual. But many can’t even try to return, or to travel to another country, because they don’t have papers. They are literally stuck.”