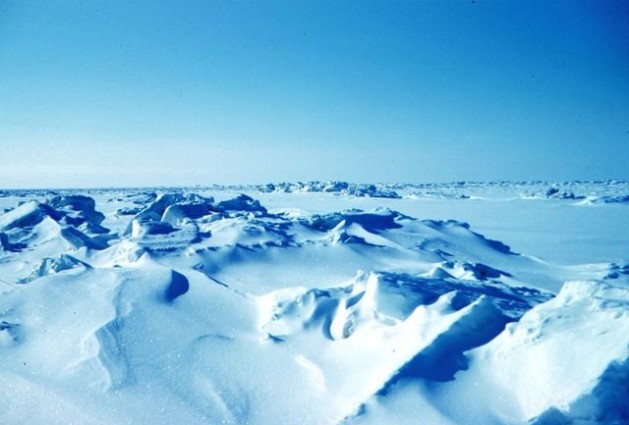 Ice ridges in the Beaufort Sea off the northern coast of Alaska, where Shell is planning to open exploratory wells. Credit: NOAA

WASHINGTON, Jul 31 2012 (IPS) - Many environmental groups are concerned over a possible extension of drilling expeditions in the Arctic, as oil companies, including Royal Dutch Shell, are set to begin drilling in the region as early as this week.

Shell is planning to open three exploratory wells in Alaska: One in the Chukchi Sea off the state’s northwestern coast, and two in the Beaufort Sea off the northern coast, after delays in production caused by a myriad of factors, including warm weather and production lapses.

An extension of a drilling window would allow the company to drill in the Arctic past the previously agreed-upon deadline of Sep. 24 in the Chukchi Sea, and the end of October in the Beaufort Sea.

Some environmental activists, however, say that the extension of the drilling window is no more than an attempt to make up for lost time.

“It would be really disturbing attempt to move the goal posts,” Travis Nichols, a media officer at Greenpeace, said to IPS. “They haven’t been able to get their fleet in order. They want to change the rules to get the administration to cater to their needs.”

The Shell project in the Arctic, originally slated to start this month, has faced numerous setbacks in its operations.

In June, a Shell drilling-rig, named the Noble Discoverer, did not meet Environmental Protection Agency emission standards, because its generator engines contained higher-than-allowed amounts of nitrous oxide and ammonia.

Earlier this month, the ship, anchored in Alaska’s Dutch Harbor, drifted off its moorings and came within 100 feet of reaching the shore.

“They clearly cannot ensure safety in the Arctic,” Dan Howells, deputy campaigns director at Greenpeace, said in a statement. According to Howells, by extending the drilling window, it “is inviting major catastrophe in one of the most delicate ecosystems on Earth.”

In February, despite opposition by environmentalists, the Interior Department’s Bureau of Safety and Environmental Enforcement (BSEE), the governmental agency in charge of offshore oil and gas drilling, approved Shell’s plans for responding to oil spills — one of the major hurdles on the way to getting full approval of offshore drilling.

“Alaska’s energy resources — onshore and offshore, conventional and renewable — hold great promise and economic opportunity for the people of Alaska and across the nation,” Ken Salazar, the U.S. Interior Secretary, explained in a statement.

“In the Arctic frontier, cautious exploration — under the strongest oversight, safety requirements and emergency response plans ever established — can help us expand our understanding of the area and its resources, and support our goal of continuing to increase safe and responsible domestic oil and gas production,” he continued.

Shell had received permission from the George W. Bush administration to drill in the Arctic, but the final permits had not been approved by the Barack Obama administration until recently.

In response to the approval, a coalition of about a dozen environmental groups, including the Natural Resources Defense Council, the Sierra Club and Oceana, filed suit against the Interior Department, challenging its approval of Shell’s oil spill response plans.

Greenpeace, an environmental activist group, has been one of the strongest critics of Shell’s arctic drilling expedition, and have aggressively protested against prolonged arctic drilling.

They have notably used social media to lampoon the oil company — including by creating a faux website, a fake Twitter handle and a game called “Angry Bergs”, as a satirical jab at Shell.

Lisa Murkowski, the Republican Senator from Alaska, has lambasted protest efforts by Greenpeace, including Greenpeace’s usage of a “protest fleet”, which would be used for “obtain(ing) core samples and other natural material form the seabed”.

“Greenpeace is pledging to impede planned exploratory drilling operations in arctic waters off the north coast of Alaska this summer,” she said in a letter to James Watson, director of the BSEE.

“Allowing intrusions by any group to disrupt or threaten federally-permitted operations is a direct threat to … safe operations … and puts in jeopardy those workers and our environment,” she wrote.

Shell has not been the only oil company trying to extract resources from the Arctic region.

According to the National Oceanic and Atmospheric Administration, a U.S. government agency dealing with environmental issues, the Arctic lost a record amount of sea ice in June — a total of 1.1 million square miles — due to the weather.

Shell, the most profitable European oil company, has already invested and spent 4.5 billion dollars in the Arctic since 2005, predominantly for leases, permits and equipment.

The potential financial and ecological risks in undertaking such an operation, however, might be outweighed by the potential profit for oil companies.

Nevertheless, other oil companies are shying away from perceived hazards in the region.

Last week, BP announced last week that it was abandoning efforts on a 1.5-billion-dollar project in the Arctic — one that had been ongoing for 14 years — stating that the project “does not meet (its) test” for proper safety standards.

The Obama administration has said that no new drilling leases will be issued for the Arctic until 2016, in order to accommodate further research on the region.

The Arctic experience, however, has not deterred Shell from further oil expeditions.

On Jul. 27, Shell signed a deal with the China National Offshore Oil Corporation to allow for gas and oil exploration in both China and West Africa. It is Shell’s first venture into Chinese waters in nearly 10 years.