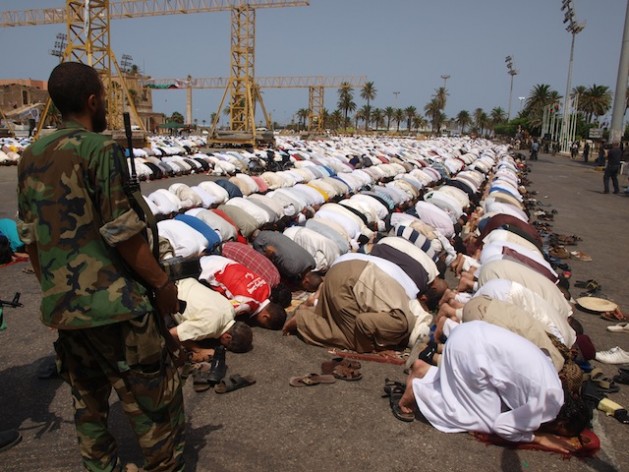 TRIPOLI, Jul 10 2012 (IPS) - Libyans appear to be putting their hopes in Mahmoud Jibril’s liberal National Forces Alliance (NFA) to cement a coalition and build bridges between Libya’s fractious militias. Many believe the party can also unite other ideologically opposed political parties, and both opponents and supporters of former dictator Muammar Gaddafi.

In all, 130 political parties and 2,500 individual candidates took part in the historic elections, with 80 seats of the National Conference set aside for party nominees and 120 for directly elected individuals in what will form the new 200-seat parliament.

Jibril’s victory has bucked a trend in the Arab spring in that his NFA coalition has surged ahead of the Muslim Brotherhood’s Justice and Reconstruction Party (JRP), which many analysts had thought, along with the Islamist Al Watan party, would follow a regional trend and put Islamists ahead.

But despite the NFA’s strong showing, Islamist candidates could still win ground when the 120 seats set aside for individual candidates are counted over the next few days.

Jibril has reached out to his opponents and called for a national coalition. Despite the grand mufti Sheikh Sadik Al-Ghariani issuing a fatwa against the NFA, and a public edict warning Libyans against voting for secularists, the JRP is reportedly considering Jibril’s offer.

Jibril also appears to have the respect of both former opponents of Gaddafi and those who fought against him.

“Jibril is well educated and has international experience. He is the best man to lead Libya at the moment,” Majdi Shatawi, 29, a teacher who was a supporter of Gaddafi, and who believes the revolution was a mistake, told IPS.

On the opposing end of the political spectrum, Khaled Hamsha, 21, a policeman in crutches from a bullet wound to the leg, who fought with rebels against Gaddafi, also believes Jibril’s NFA is the best choice.

“Jibril is an intelligent businessman. He is honest and politically experienced. He gave a lot of his own money to the revolutionaries to help them overthrow Gaddafi even though he used to be part of Gaddafi’s government.”

His support for the revolutionaries, and his support base of former Gaddafi supporters might make Jibril the ideal candidate to bridge the political divides of the bloody revolution, but some also see him as a switchcoat opportunist.

Some local media reports say that former revolutionaries plan meetings across Libya to protest that Jibril has “stolen their revolution.”

Former rebel fighter Suheil al Lagi told IPS that many of the former rebels were dissatisfied with Jibril and the NTC. “We didn’t give our lives and blood to be ruled by the corrupt and greedy leaders we have now. If things continue they way they are, we will be forced to take up arms again.”

Former fighters accuse the government of being nepotistic and reserving government jobs and diplomatic positions for cronies.

Jibril also faces problems from federalists wanting greater autonomy in Libya’s east. The federalists have been behind a spate of violent attacks against government offices and property over the last few weeks. A helicopter was shot down, elections offices were torched, and several oil wells forced to stop pumping oil.

Libyan security forces are often outgunned and outpowered by the militias which still control swathes of the country, and who are able to mobilise faster than the security forces.