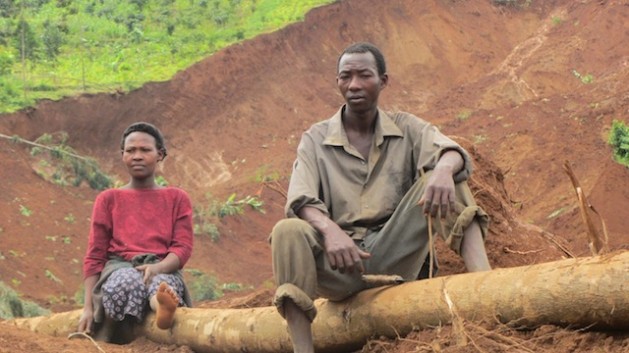 A grieving Michael Kusolo and his wife Mary lost all their four children in the recent landslides. They are sitting on a spot where they suspect their children were buried by the mudslide. Credit: Wambi Michael/IPS

BUDUDA, Uganda, Jul 4 2012 (IPS) - The Ugandan government says it will forcibly remove people settling on the steep slopes of Mount Elgon in eastern Uganda’s Bududa District, as the growing population has resulted in increased landslides in recent years.

In the latest one on Jun. 25, an estimated 100 people are feared dead and up to 250 have been unaccounted for when three villages were washed away after heavy rainfall in the area.

Over the last three years, landslides have buried alive several hundred people living on the slopes of Mount Elgon.

But the increasing number of fatalities resulting from the landslides has not stopped people from settling here. Mount Elgon, according to the Uganda Bureau of Statistics, has the country’s highest population density of 1,000 people per square kilometre with a population growth rate of 3.4 percent per annum.

Many locals have been hesitant to move to low-lying areas as some say that the soil is very fertile for farming, while others claim cultural and historical attachments to the mountain.

However, Dr. Steven Malinga, Uganda’s Disaster Preparedness Minister, told IPS that the government is now determined to enact a law to allow it to evict all those living on dangerous parts of the mountain slope in order to resettle them elsewhere.

“This place has been one of the most risky areas as far as landslides are concerned. And they are getting more frequent and severe. So a special committee of cabinet has been formed. The committee will go round the mountain sensitising people on voluntary relocation,” Malinga told IPS.

The recent landslide has left a huge hollow in the mountain the size of 10 football pitches. A mound of soil mixed with eucalyptus trees, banana suckers and wrinkled iron sheets that once were part of people’s houses stands at the bottom of the mountain. Buried underneath it are human bodies and cattle carcasses.

Malinga said if people did not want to move voluntarily for their own safety, the government would use force.

“If they do not move we shall have no option but to forcefully evacuate them. We shall use our security forces, if necessary, to have those people moved,” he said.

He added that the country’s current constitution did not allow the government to forcefully evict communities, even if they were in danger.

“That is why we need another law to allow for the forceful evacuation of people living in danger. Otherwise they will claim their rights are being violated,” he said.

Over 600 people were relocated to government-owned land in Uganda’s Midwestern district of Kiryandongo after the March 2010 landslides. However, Malinga said many had returned.

“That kind of thing should not be happening. We have got to teach our people that these are risky areas,” he said.

He added that the government would aid those who could not afford to buy land elsewhere.

The Mount Elgon area conservation manager Adonia Bintora told IPS that although landslides have occurred in Bududa District since the early 1900s, they are likely to become more frequent and deadly as the population increases.

Bintora told IPS that the population growth has exerted more pressure on the land and natural vegetation leaving the soil denuded and therefore vulnerable to landslides.

“So if the hills are stripped of vegetation, the soil gets saturated with rain water and therefore it easily caves in,” said Bintora.

She explained that overpopulation in the area has exerted pressure on the clay-rich soils as residents clear hillside forests for firewood and farming.

“And when there are no trees with complex roots to hold the soil in place after constant rain, then you end up with landslides. The moment trees are cleared, water becomes the only downward driving force, and you will end up with land slides,” she said.

Apart from felling trees and extensively tilling the land, Kitutu told IPS that the practice by cutting into slopes for the construction of houses and roads has triggered slope failure.

When IPS visited the affected areas, it was easy to observe houses constructed on excavated slopes. The backs of the houses are situated next to high walls of mud that could easily cave in.

“The cutting of slopes removes the lateral support of the slope leading to slope failure,” said Kitutu.

Scientists have also said that Mount Elgon has developed a 40-kilometre crack with a width of between 30 to 35 centimetres. Bintora told IPS that the crack could affect up to three million people living on Kenyan and Ugandan sides of Mount Elgon.

Moving may be the only option to save the community here from further devastation. But some locals are resistant to the idea.

Gabriel Buyela, who lives just across the hill from the area where latest landslides occurred, told IPS that he would only move to a low lying area in the district if government provided him with land. But he added that he could not abandon his ancestral home.

Zaina Namono lost a relative in the landslide but said she and her family were hesitant to move.

“The government relocated our people to Kiyrandongo after the March 2010 landslides but we have heard that they are suffering and going without food. We cannot accept to be subjected to the same,” she said.

Though some who have lost everything say they will relocate.

A grieving Michael Kusolo and his wife Mary lost all their four children in the recent landslides. Kusolo told IPS that he had no alternative but to move because everything he had was now destroyed.

“Even all the land is gone; the graves of my father, my mother and brothers were swept away. So I will move,” he said.