UNITED NATIONS, Jul 10 2012 (IPS) - Knowledge-sharing has become a cornerstone of successful cooperation among developing countries, in areas ranging from agriculture to health and renewable energies. 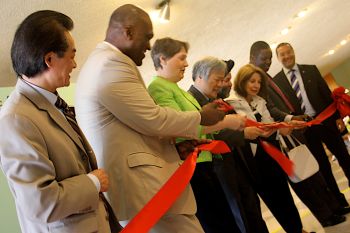 Helen Clark and John Ashe are joined by representatives from Japan, South Africa, India, Brazil and South Korea at the ribbon-cutting ceremony of the South-South Cooperation exhibition. Credit: Shari Nijman/IPS

“There is a feeling that there are some solutions which can be generated by the South for the benefit of the South, and that ought to be shared between Southern countries,” John Ashe, president of the United Nations High-level Committee on South-South Cooperation, told IPS.

Between 1996 and 2011, Japan contributed more than 33 million dollars to South-South initiatives.

Masato Watanabe, the vice-president of Japan’s International Cooperation Agency, told IPS, “We’ve devised a couple of modalities and approaches. One is to have triangular training programmes. The second one is to have bilateral partnership programmes with potential providers of development cooperation. The third one is to explore the possibility of utilising so called centres of excellence in the South.”

NERICA (New Rice for Africa), an initiative funded by the Japanese government, the African Development Bank and the UNDP, has been in operation for 15 years. Today, over 700,000 hectares of NERICA varieties of rice are cultivated in 31 countries, leading to a five-percent reduction in poverty in Uganda and a 13-percent reduction in Benin.

“What we are trying to do is to share these modalities or potential modalities and approaches with other partners so that they can learn our experience and through mutual learning processes we may create better models or approaches,” said Watanabe.

Ambassador Hardeep Singh Puri, permanent representative of India to the United Nations, spoke to IPS on behalf of IBSA (India, Brazil and South Africa). “South-South Cooperation is doing what it can and that’s what needs to be accepted in its own framework, in the way it is, based on the national priorities of the countries which are the partner countries,” said Puri.

The IBSA Facility for Poverty and Hunger Alleviation Fund has aided initiatives of the U.N. SSC unit since it was created in 2004.

It has helped to combat HIV and AIDS in Burundi by building and equipping a prevention, testing and treatment centre. This centre will enable around 39,000 consultations per year for various health-care services including HIV and AIDS, reproductive health, sexually transmitted diseases, prenatal care and family planning.

The IBSA fund also supports Guinea-Bissau’s agriculture, education and clean energy development by training over 4,500 farmers in enhanced agriculture techniques for rice cultivation, and implementing a solar-energy strategy for rural areas. This has led to a 12-percent increase in crop yields and enabled 3,000 individuals to access electricity, according to IBSA.

The programme will soon be expanded to include 20 additional villages.

“South-South Cooperation can neither be seen as substitute, or in any way as a displacer for North-South cooperation, which must remain strong,” Puri said.

China’s investment in solar energy systems in Kenya has benefitted 250. The project researched and developed solar technologies that were adapted to the geographical conditions of the region.

GNERI (The Gansu Natural Energy Research Institute) was the partner responsible for researching and developing these solar products, and produced 50 solar photocaic demonstration systems, 100 solar water heating systems and 100 solar cooker systems, all designed for use by villages and households in sub-Saharan Africa.

To date, pilot projects are underway in Laos, Nepal, Sri Lanka and Thailand. In 2012, seven projects will be added in Bangladesh, Cambodia and Burma.

The UNDP has been credited for facilitating South-South and Triangular development as an important means for advancing development and achieving the Millennium Development Goals.

In an exhibition that opened last Friday at the United Nations, SSC and its successful partnerships are now displayed for the public to see.

Speaking at the opening of the exhibition, Helen Clark, UNDP administrator and chair of the United Nations Development Group, said, “We believe that through the universal presence we have in developing countries we have the capacity to link people, countries, communities, ideas, experience and best practice.”