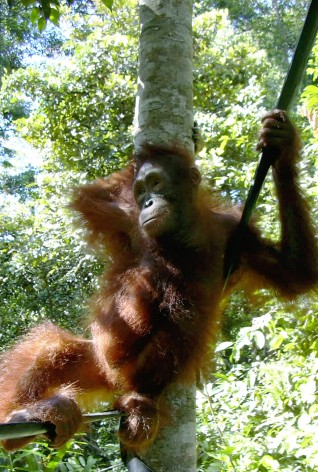 JAKARTA, Aug 10 2012 (IPS) - When four men were sentenced to eight months in jail in March for the ‘murder’ of orangutans, it was the first time that people associated with Indonesia’s booming palm oil industry were convicted for killing man’s close relations in the primate family.

Conservationists were not happy with the ‘light’ sentences handed down by the court in Kutai Kertanegara district, East Kalimantan, on Mar. 18, to Imam Muktarom, Mujianto, Widiantoro and Malaysian national Phuah Cuan Pun.

“As expected, the sentences were light, much lighter than what the prosecutors demanded. Such punishments will not bring any change to the situation of orangutans,” Fian Khairunnissa, an activist of the Centre for Orangutan Protection, told IPS.

Indonesia’s courts have generally looked the other way as the palm oil industry relentlessly decimated orangutans by destroying vast swathes of Southeast Asia’s rainforests to convert them into oil palm plantations.

In April, a court in Banda Aceh, Sumatra, dismissed a case filed by the Indonesia Environmental Forum (WALHI) against PT Kallista Alam, one of five palm oil firms operating in Tripa, and Irwandi Yusuf, former governor of Aceh province, for the conversion of 1,600 hectares (3,950 acres) of carbon-rich peat forests into palm oil plantations.

The court admonished WALHI saying it should have sought an out-of-court settlement with PT Kallista Alam –  which never paused clearing its  1,600-hectare concession, granted in August 2011.

Mysteriously, just before the WALHI case was to be heard in court, numerous fires broke out in the Tripa peat swamps, including in the concession granted to PT Kallista Alam.

Community leaders in Tripa point out that the concessions fly in the face of a presidential  moratorium on new permits to clear primary forests, effective in Indonesia since last year as part of a billion dollar deal with Norway to cut greenhouse gas emissions.

“The issuance of a license to Kallista is a crime, because it changes the Leuser ecosystem and peat land forests into business concessions,” Kamarudin, a Tripa community spokesman, told IPS.

The Leuser Ecosystem, in the provinces of Aceh and North Sumatra, covers more than 2.6 million hectares of prime tropical rain forest and is the last place on earth where Sumatran sub-species of elephants, rhinoceros, tigers and orangutans coexist.

The survival of orangutans,  a ‘keystone species’,  is critical for the wellbeing of other animals and plants with which they coexist in a habitat.

A statement released in June by the Sumatran Orangutan Conservation Programme estimated that there are now only 200 of the red-harired great apes left in Tripa compared to  about 2,000 in 1990 and said their situation was now ‘desperate’ as result of the fires and clearing operations carried out by palm oil companies.

During the last five years, the oil palm business has emerged as a major force in the Indonesian economy, with an investment value of close five billion dollars on eight million hectares.

Indonesia plans to increase crude palm oil (CPO) production from the current 23.2 million tons this year to 28.4 million tons by 2014. This calls for an 18.7 percent increase in plantation area, according to Indonesia’s agriculture ministry.

But the price of the planned expansion would be further shrinkage of orangutan habitat by 1.6 million hectares because oil companies find it cheaper to burn forests and chase away or kill the orangutans.

“If you find orangutans in palm oil plantations, they are not coming there from somewhere else… they are in their own homes that have been changed into plantations,” said Linda Yuliani, a researcher at the Centre for International Forestry Research.

“But plantation company people see the orangutans as the encroachers,” she said. “Confused orangutans can often be seen wandering in plantations, and with their habitat gone, they forage on young palm trees,” she said.

A joint survey by 19 organisations, including The Nature Conservancy, WWF and the Association of Primate Experts, found that some 750 orangutans died during 2008-2009, mostly because of conflict with human beings.

It has not mattered that Indonesia is one of the signatories to the Convention on Illegal Trade and Endangered Species, which classifies orangutans under Appendix I which lists species identified as currently endangered, or in danger of extinction.

Reckless clearing of peat swamp forests has already turned Indonesia into the world’s largest emitter  of carbon dioxide, after the United States and China.

“The government may earn some money from oil palm investment, but there are far bigger losses from environmental destruction,” says Elfian Effendi, director of Greenomics Indonesia. “There is a multiplied effect on the local economy and loss of biodiversity.”

But, even to some conservationists, stopping the oil palm business in Indonesia – which feeds a vast range of industries from fast food and cosmetics to biodiesel – is impractical.

“What is needed is enforcement of schemes that allow the palm oil business and orangutans to co-exist,” Resit Rozer, a Dutch conservationist who runs a sanctuary for rescued orangutans, told IPS.

Palm oil companies that are members of the Roundtable on Sustainable Palm Oil (RSPO), a convention to encourage importers to buy only RSPO-certified CPO, see no advantage in the scheme that requires them to set aside a forest block for orangutans within plantations and provide safe corridors for the apes to move from one spot to another.

“U.S. and several European countries still buy non-certified CPO as the RSPO certificate does not gurantee purchase,” Rozer told IPS. “The West told us to practice environmentally-sound business, but they do not buy RSPO-certified CPO because implementation has been delayed till 2015,” Rozer said.

“For companies that have invested in RSPO certification, the delay has been a heavy blow. They feel cheated,” said Rozer who helps palm oil companies in creating orangutan refuges and corridors.