SANTIAGO, Aug 31 2012 (IPS) - It is essential for young people in Chile to assume a more active role in politics, especially in two key electoral processes: the municipal elections in October and the legislative and presidential vote in 2013, says student leader Camila Vallejo, who has not ruled out running for a seat in parliament herself.

A media darling who has drawn international attention, Vallejo is the most charismatic face of Chile’s social movement today. As past president of the University of Chile Student Federation (FECH), she played a fundamental role in the movement of university and secondary school students that in 2011 were behind the largest social protests held since the return to democracy in 1990. 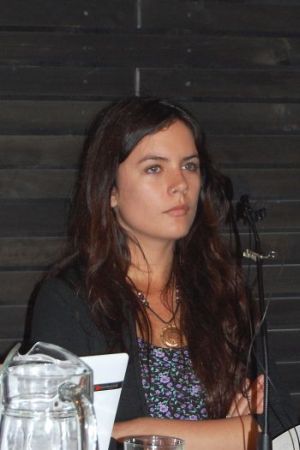 Camila Vallejo: Chilean families took to the streets once again, together with the student movement. Credit: Marianela Jarroud/IPS

This year, as vice president of FECH – in December she was defeated for her bid for re-election as president by Gabriel Boric – and one step away from earning a degree in geography, she is emerging as the most promising young potential politician of the last few decades.

In this interview with IPS, the 24-year-old member of the Communist Youth of Chile says she is not in favour of replicating models or strategies followed elsewhere in the region, although she does believe that “another world is possible.”

She says Latin America is heading in a good direction, led by progressive governments in a number of countries.

With respect to the student movement, she says it “acted erratically” early this year, which apparently undermined support for the protests. But she says the mistakes were corrected, as demonstrated by the fact that 180,000 people came out on Tuesday Aug. 28 in the latest march demanding free, quality public education for all.

The students are demanding a radical change in the educational system in Chile which, despite the improvements introduced in 2009 after mass demonstrations began to be held in 2006, is still based on a scheme of decentralisation and privatisation put in place by the 1973-1990 dictatorship, with schools governed by the profit motive and which hold entrance exams to select students.

Q: Young people marked Chile’s political agenda in 2011. Do you think it’s important for them to take on a role representing the people?

A: It is essential. That is why I support the (Communist Party) candidature of (25-year-old) Camilo Ballesteros for mayor of the Central Station district. He was an excellent leader and will be an excellent mayor.

Furthermore, the University of Santiago de Chile, where Camilo was president of the Student Federation, is in the heart of the district, and I’m sure he will have a great ability to convey and capitalise on the added value of having such an important educational centre in his area, which the right-wing administrations have never managed to do.

Q: Are you willing to take on a role of this kind, in parliament, for example?

A: I have stated in different national media outlets that yes, I’m willing, although it is far from being one of my goals, in and of itself. My objective is a more democratic country, to put an end to the constitution inherited from the dictatorship of Augusto Pinochet, and to elect a constituent assembly to rewrite it.

We have to eliminate the ‘binomial’ electoral system (the two most highly-voted legislators per district are elected), and we need to nationalise our natural resources. We also need free, quality public education and social rights. These are the objectives and I want to contribute to this from wherever necessary.

Q: Some students are calling for a boycott of the municipal elections. What do you think about that?

A: It’s a mistake. By proposing this, the Coordinating Assembly of Secondary Students is creating a self-fulfilling prophecy of a defeat, because the elections will be held anyway.

The only thing they might achieve is to keep some young people away from the polls, which in turn is a setback in terms of the influence that the student movement has to gain in the institutional sphere.

Q: Do you agree with those who say the student movement is wearing down, or that people are getting tired because the aims are not being met?

A: In the first half of this year, the student movement acted erratically, and ended up isolating other social actors. But processes of discussion, criticism and self-criticism were carried out, and on Tuesday Aug. 28 many people took part in our protest, demonstrating our strength – it was massive. Chilean families took to the streets once again.

With respect to what to do to avoid wear-and-tear, you have to foster and protect unity with broad sectors of society.

Q: What does it mean to be a communist today in the midst of a social movement that seems to feel distant from the parties and from traditional politics?

A: I don’t share that view of the Chilean social movement. Besides, I’m not a communist inserted in a social movement from which I am detached. I am part of it, as are all my compañeros in the Communist Party’s Communist Youth. We form part of this movement, in all sorts of different places.

At the same time, in every factory, company, trade union, neighbourhood council or even parliament, in every place where there is a communist, a struggle is being waged for this social movement to triumph.

Q: What do you think about the different political models in other countries today? For many, the slogan is “another world is possible” – but how can that be brought about?

A: Each country’s experience is unique, and it’s not good to try to replicate models. For years, the neoliberals have been trying to replicate “the American Dream” in Latin America, which has brought poverty, inequality, lack of education and misery. Nevertheless, there is something to learn from every experience.

Another world is possible to the extent that every society manages to find its own path towards greater democracy and stronger social rights, like free education and healthcare, decent housing, and a lifestyle that is in harmony with the environment.

Q: Your reputation as a student leader has gone beyond Chile’s borders, and you have been able to see the situation in other parts of Latin America. What is your view of the different processes of change?

A: I think the overall situation in the region is quite positive. Progressive governments have managed to move towards greater economic, social and political integration by means of groupings like the Union of South American Nations (UNASUR), the Southern Common Market (Mercosur trade bloc), and the Community of Latin American and Caribbean States.

Chile, although it takes part in these groupings, runs counter to the majority of the countries in South America, with its populist, right-wing government.