Q&A: Microcredit Bank “Incorporates Women in the Benefits of Development” 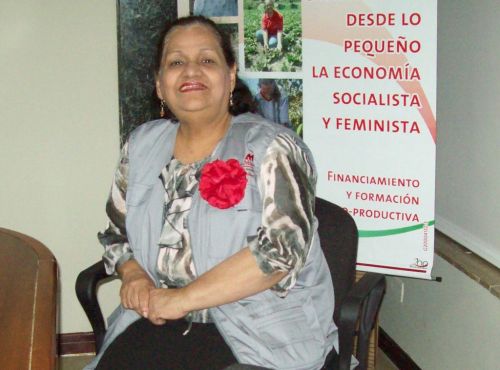 Nora Castañeda, in front of a sign containing one of Banmujer’s slogans about small-scale loans in a socialist, feminist economy. Credit: Raúl Límaco/IPS

CARACAS, Aug 9 2012 (IPS) - “Our raison d’etre is incorporating women in development, and especially in the benefits of development,” says Nora Castañeda, an economist who has headed the Banmujer bank in Venezuela since it was founded in 2001.

Castañeda, who describes herself as a socialist and feminist, has dedicated her life to defending women’s rights. And she continues to fight for that cause in the Banco de Desarrollo de la Mujer (Women’s Development Bank – Banmujer), which she defines as “a different kind of bank,” in the broader context of the world’s microcredit institutions.

Her lengthy career includes founding the Women’s Studies Centre at the Central University of Venezuela and coordinating the participation of the local NGOs in the Fourth World Conference on Women in Beijing, in 1995.

Banmujer, the only public bank of its kind in the world – which targets women, offering them services completely free of charge – has granted 150,000 small loans for a total of 10.7 million dollars.

Q: What characterises Banmujer as a microcredit institution?

A: There are several kinds of microfinance institutions, but Banmujer is different from all of them, because making a profit is not our raison d’etre. But there is a more important aspect as well: incorporating women in development, and especially in the benefits of development. And you can’t do that with microcredit alone.

Q: How did the idea emerge?

A: The road to Beijing, and the conference itself, were the starting point. Women’s organisations concluded there that if something was in threat, it was the economic rights of women, and that without them, there were no human rights.

If the economic foundations of society do not change for women, especially the poorest women, there is no empowerment, and gender parity laws remain a paper promise.

Q: So microcredit is a means to an end?

A: Definitely. The bank was not set up just to grant microloans. If we merely did that, we would simply be reproducing the triple shift that women face (childcare and housework, outside employment, and community involvement), although only one of these is paid, and badly.

Incorporating women in the benefits of the economy will not just be brought about by means of microcredit, but by improving our quality of life, by strengthening family solidarity, and through work, honesty and sharing.

We started to work in that direction, with a very collective learning process, very South-South, very characteristic of our Americas. We had to learn and unlearn at the same time. There are values that are anti-values, and we had to think differently, at the risk of being seen as backwards, full of complexes, or marginalised.

Q: Could you mention an example of something you had to unlearn?

A: We had to unlearn what a bank is, because we had been told that it was a financial institution whose goal is to make a profit. We discussed the model that we wanted a great deal, and decided that we had to prioritise and focus on the poorest women, and address the feminisation of poverty.

Q: What model did that process come up with?

A: The solidarity model, based on cooperation and mutual aid. A model based on the idea that the people who manage and administer are public servers of others. It wasn’t easy, we made mistakes. Your proposals aren’t always understood from the outside; things don’t always work the way you think they will.

It’s a new path, and there has been trial and error, in practice. And there is also the very important time variable: these are slow processes, and it is hard to adapt and understand how things work.

Q: What brings women to the bank?

A: We decided that it was the bank that had to go to the women. We set up small teams of local women, with one leader, in each state.

We go to the communities, we offer support, we ask for a simple working plan, and, first and foremost, we offer training. All of the women must attend at least three workshops, because they could receive money and not be successful in their endeavours due to reasons connected to the poverty in which they live.

Poverty cannot be fought only with money. To overcome it, you need to work with solidarity-based organisations, which can even be families themselves. Men can be involved, as long as the coordinator is a woman and men are a minority. The thing is, even in that situation, the men take charge, and the women accept it, because it is the way things usually work.

Q: What is the aim of the training?

A: We are trying to turn the women into grassroots economists; we want them to ask themselves academic-style questions, such as what to produce, how, where, when and for whom, as part of a two-way exchange of knowledge, which we all have, but not in a systematised format.

We also replace market analysis with a participative community diagnosis of the needs of the neighbourhood and community, or we carry out a cost analysis, which incorporates women as workers and sets an adequate amount of surplus value.

The aim is for people to be economists, because it is too serious a question to just leave to economists.

There is also follow-up and technical support, and it is all free of charge. That also sets us apart.

Q: How many people has Banmujer benefited?

A: Directly: about 150,000 people, 10 percent of whom were men. Behind each person there is a family with an average of five members.

Q: How does the loan process work?

A: We have managed some 467 million bolivars (10.7 million dollars at the official exchange rate) in 11 years. The support given provides ongoing results.

We have granted 150,000 loans. But this has indirectly favoured a large number of other women, as the loans have a multiplication effect in the surrounding community.

That is the aim of the workshops. Our mission is to learn, and to be recognised as something positive that is worth emulating.

Microcredit is a tool, and the cross-cutting aspect is a change of values. We told the president (Hugo Chávez): microcredit is an excuse for reaching women, and with them, through them, and for them, organising ourselves as a people. And he told me: ok, but you give them the credit (laughs).

Along the way, we decided to prioritise agriculture, including urban and peri-urban, to address two overlapping phenomena: the feminisation of the countryside and of poverty.

Q: What are the conditions of credit and payment?

A: The loans are for 48 months and are 6,000 bolivars (1,400 dollars) per person for groups of up to nine people. The interest rate ranges from zero to six percent. There are no profits – it’s non-profit, but the aim is also to be non-loss.

We are a bank subsidised by the state, which is unique in the case of women, to help meet the Millennium Development Goals (a series of development and anti-poverty targets adopted by U.N. members in 2000), including the elimination of poverty and the empowerment of women. We maximise cost savings as much as possible, so that our balance sheets never reflect a loss.

This way, the women receive more and more money. Those who pay back the loans are given a new one; that’s why they are all keen on keeping up on their payments. The women are constantly paying back their loans; sometimes instead of making the entire payment, they pay just part of it, but later on they catch up.