BUENOS AIRES, Nov 2 2011 (IPS) - Although microfinance is more deeply rooted in Latin America than in other regions, in Argentina the sector is less developed, but has enormous potential, experts say. 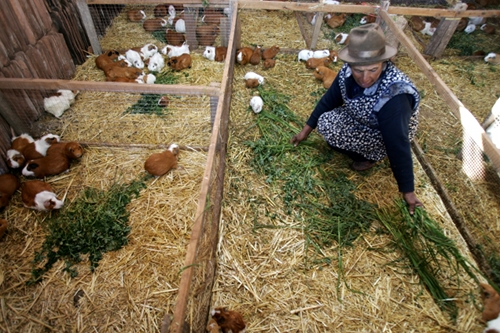 Teófila Anchahua in the highlands of Peru raises guinea pigs with the help of a microloan. Credit: Julio Angulo/IPS

Latin America topped the Global Microscope on the Microfinance Business Environment 2011, launched in October. Six of the top 10 countries in the ranking of 55 developing nations covered by the report are in this region.

The index was developed in 2007 by the Economist Intelligence Unit, the Inter-American Development Bank (IDB) and the Andean Development Corporation (CAF), and is now also supported by the Netherlands Technical Assistance Trust Fund.

Peru and Bolivia ranked first and second in the overall ranking, which is based on three broad categories: regulatory framework, institutional development and investment climate.

Martín Grandes, an economist at the Argentine Catholic University (UCA) business school, told IPS that Argentina’s microfinance industry is indeed one of the least developed, in terms of portfolio and number of clients.

Grandes is one of the authors of the report “La demanda potencial de microcréditos en Argentina” (Potential Demand for Microcredit in Argentina), recently published by the UCA business school, which sought to identify hurdles standing in the way of the growth of microfinance in this South American country.

The authors say the institutions of microfinance, which is described as “an effective mechanism for reducing poverty and fomenting social inclusion,” are “underdeveloped” in Argentina compared to other countries in the region.

But that is not due to a lack of need, above and beyond the discrepancies over poverty statistics.

According to estimates by private polling firms like Equis, the poverty rate actually stands at 20 percent, although the government statistics agency, INDEC, puts the official rate at 8.3 percent of the population of 41 million.

Among the poor, there are many potential clients for microloans for housing or productive enterprises. According to the study, the potential demand among people working in the informal sector, low-paid workers, and the unemployed ranges between 660,000 and 910,000 people.

But Grandes said there are only between 80,000 and 100,000 current outstanding microloans.

The report says that 61 percent of the potential clients are men, mainly between the ages of 30 and 49, who have no bank accounts or credit cards to finance purchases or investments.

The study also says government cash transfer programmes, such as the universal child allowance introduced in 2009 that provides around 50 dollars a month for each child under 18 to parents who are unemployed or work in the informal sector of the economy, “can be a disincentive for microenterprise activity.”

But Grandes contradicted that conclusion, in his interview with IPS: “On the contrary, these social plans don’t discourage people from asking for loans; they encourage them to do so.”

Microcredit is a relatively new phenomenon in Argentina. In 2006, a new law created the national microcredit commission, CONAMI, under the ministry of social development.

CONAMI has a 100 million dollar fund that provides financing to NGOs, cooperatives and other not-for-profit institutions engaged in solidarity lending, where small groups borrow collectively and members of the group encourage one another to repay. The commission also offers technical advice to lenders of microcredit.

The loans made to individuals through the fund administered by CONAMI are of a maximum of 7,000 dollars, and the interest rate is subsidised to keep it below six percent a year.

In addition, a mixed public-private body, the Social Capital Fund (FONCAP), lends microcredit at higher rates. And there are also public and private banks that have credit lines for small enterprises, at market rates.

Grandes said the Argentine state is interested in giving the microcredit industry a boost, but that it “lacks coordination.” And in his view, the six percent interest rate cap set by law on CONAMI funds “is ridiculously low; it’s like giving the money away.”

The expert said that with an inflation rate estimated by private economists at over 20 percent a year, and with the high operating costs required by the monitoring of microfinance, it is impossible for the offer of microloans to grow.

He also said that unlike the laws of other countries, the legislation in Argentina does not allow microcredit funds to also offer microsavings plans and other financial services, like microinsurance.

These microfinance tools would help the industry grow, so that it could become self-financing, Grandes added.