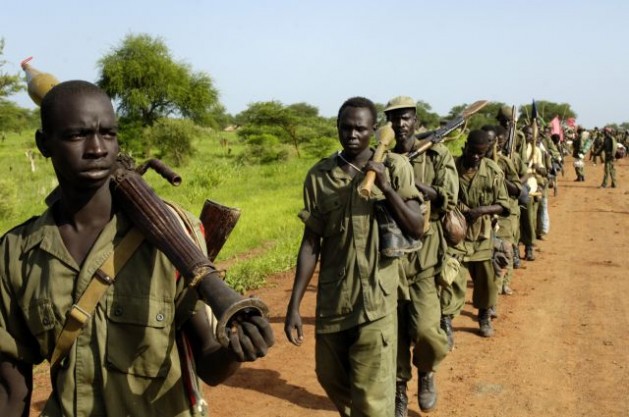 Soldiers of the Sudanese People's Liberation Army (SPLA) redeploy to form a new Joint Integrated Unit (JIU) battalion with the Sudan Armed Forces (SAF), under the terms of the agreement of the Abyei road map. Credit: UN Photo/Tim McKulka

UNITED NATIONS, Sep 8 2012 (IPS) - When U.N. Secretary-General Ban Ki-moon addresses the High-Level Forum on Culture of Peace later this week, he will transmit a message that underlines his political philosophy: all disputes need to be resolved by peaceful means, not through military might.

And time and again, he has warned that the militarisation by both parties of the 17-month political crisis in Syria, which has claimed over 18,000 lives, would never result in a peaceful settlement.

The culture of violence, he believes, has to be replaced with the culture of peace – even as military conflicts and insurgencies have destroyed human lives and caused devastation in Sudan, Syria, Cote d’Ivoire, Somalia, Colombia, Mali, Libya, Afghanistan, Iraq and Palestine.

In his address, Ban is expected to reiterate the urgent need to comply with the basic principles of the U.N. Declaration and Programme of Action on the Culture of Peace adopted by consensus by the General Assembly back in September 1999.

“Unfortunately,” said a Third World diplomat, speaking on condition of anonymity, “violence seems to be a cultural thing worldwide, judging by the recent shootings in South Africa, the ruthless suppression of demonstrators in Bahrain and Syria and the suicide bombings in Iraq, Pakistan and Afghanistan.”

As the Declaration points out, he said, the United Nations should strengthen its ongoing efforts to promote a culture of peace and effectively implement the Programme of Action (POA).

Article 1 of that Declaration calls on all U.N. member states to commit to peaceful settlement of conflicts.

And Article 3 says the fuller development of a culture of peace is integrally linked to promoting peaceful settlement of conflicts, mutual respect and understanding, and international cooperation.

Cora Weiss, president of The Hague Appeal for Peace and former president and current U.N. representative of the International Peace Bureau, told IPS: “People are tired of war. The price of violence is astronomic.

“And if we continue the culture of violence, we will be forever grieving for the dead and caring for the wounded,” she said.

“It is time to work harder to ensure that we… save succeeding generations from the scourge of war,” said Weiss, who will be a keynote speaker, representing civil society, at the High-Level Forum scheduled to take place Sep. 14.

Besides Weiss, the other keynote speakers will include the secretary-general, the General Assembly President Nassir Abdulaziz Al-Nasser, and Federico Mayor, president of the Foundation for a Culture of Peace.

A special focus will be on the implementation of the 1999 POA on Culture of Peace, as well as for the further strengthening of the global movement that has emerged.

Weiss told IPS the upcoming Forum will bring together member states and civil society and will inspire governments to think about what they can do to implement the unanimous resolutions which called for a Culture of Peace and a POA.

The Forum will also will stimulate civil society to continue to press for non-violence, for mediation of disputes, for greater efforts at disarmament and for full participation of women at all levels of decision making, she added.

“We will gently remind governments of their votes and agreements which created a 16-point action agenda yet to be well implemented. We will encourage civil society to never give up.”

She said the history of successful reforms and achievements initiated and promoted by civil society has empowered the powerless, and demonstrated that mere citizens are the real superpower.

Weiss said the president of the General Assembly, the secretary-general and their advisers “should be congratulated and thanked for bringing us together as humanity, not separated by titles”.

“Because the threats to peace do not separate us,” she added.

“Families of governmental members and families of civil society are equally threatened by inadequate education, populations that are poorly fed, and in poor health. Global warming, nuclear weapons, and epidemic disease do not recognise borders, names of victims or titles,” she said.

The Forum, initiated by the president of the General Assembly, is taking place with the cooperation of Foundation for Culture of Peace, Inter Press Service (IPS) news agency and the Global Movement for the Culture of Peace, with support from the Permanent Missions of Bangladesh, Benin, Costa Rica, El Salvador, Guatemala, Kazakhstan, the Philippines and South Africa.

The Forum will include two panel discussions, one on “The Culture of Peace at the core of humanity’s agenda: New partnerships, new developments”, and the second panel on “Strengthening the global movement, advancing the implementation of the UN Programme of Action on Culture of Peace: the way forward”.