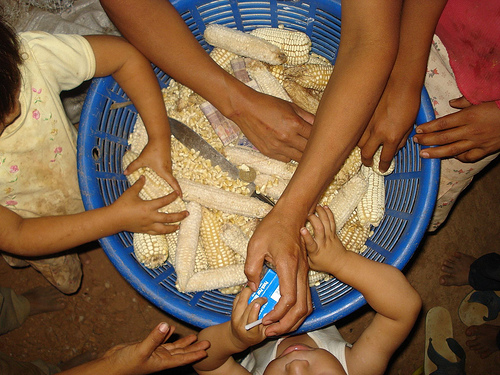 UXBRIDGE, Canada, Sep 13 2012 (IPS) - Growing water shortages in many countries are a major threat to global security and development and should be a top priority at the U.N. Security Council, a panel of experts said in a new report.

However, that report ignores the biggest threat to water security: neoliberal policies of the free market economic system laying waste to the natural world and turning water into a commodity, activists counter.

China and India will not have enough fresh water to meet their needs before 2030, according to the “Global Water Crisis” report released this week. Well before that time, water shortages will increase conflicts and worsen instability in sub-Saharan Africa, West Asia and North Africa, it warned.

“Using water the way we have in the past simply will not sustain humanity in future,” said Chrétien, a co-chair of the InterAction Council (IAC), a group of 40 prominent former government leaders.

The IAC, the United Nations University’s Institute for Water, Environment and Health, and Canada’s Walter and Duncan Gordon Foundation convened a conference of water experts in 2011 whose deliberations ultimately resulted in the report: “The Global Water Crisis: Addressing an Urgent Security Issue”.

With about one billion more mouths to feed worldwide by 2025, global agriculture alone will require additional water equivalent to the annual flow of 20 Niles or 100 Colorado Rivers every year, the report found.

Meanwhile, greater competition between the energy sector and other water users for already limited freshwater resources in many regions will impact future energy development, with significant potential impacts on energy reliability and security.

U.S. security and intelligence agencies say there are areas of the world where the water situation is worsening, as is the local capacity to respond to droughts and floods, said Zafar Adeel, director of the United Nations University’s Canadian-based Institute for Water, Environment and Health.

“Within a decade these could escalate into security concerns,” Adeel, a report co-author, told IPS.

“The international community needs to invest far more into improving the management of water,” he said.

Amongst the reports recommendations is a call for increased annual investment in water supply and sanitation-related efforts by approximately 11 billion dollars.

“Today, a child dies on average every 20 seconds from a water-related disease,” said Adeel.

“We welcome the attention being brought to the global water crisis by these former leaders,” said Maude Barlow, the national chairperson of the Council of Canadians.

“Their voices carry a lot of weight and they may get the attention of current leaders and policy makers in a way that has been hard for those of us in civil society to do,” Barlow told IPS.

She is the author of the book “Blue Covenant: The Global Water Crisis” and was a leader in the campaign to have water recognised as a human right by the U.N.

In 2010, the U.N. General Assembly recognised water as a human right.

Barlow supports the call in the IAC report for nations and international institutions to address issues of conservation, water re-use, source protection and investments in much-needed infrastructure to ensure water services.

The glaring omission in the report and its recommendations is the fact that the “exponential demand for water is directly tied to a consumer lifestyle fed by globalisation”, she said. Unrestrained growth, unregulated free trade and corporate self-governance are the biggest threats to water, Barlow told IPS.

“Industrialised agriculture and the global trade in food have taken a terrible toll on the world’s water. What we need are local sustainable food polices that reward the wise use of local watersheds.”

Barlow said she is saddened by the fact that the report does not delve into the heart of the problem because it is not seen as politically feasible to tackle the main threats to water, economic growth and corporate power.

“A water secure future will only happen if water is declared a common heritage and public trust, managed justly for the good of all,” she concluded.