No Safe Exit for Military Leaders 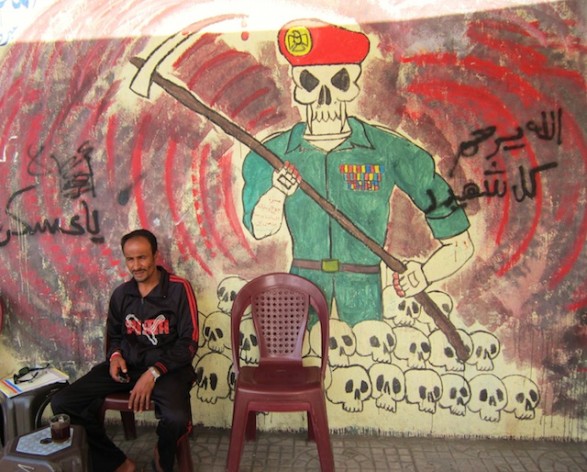 CAIRO, Sep 16 2012 (IPS) - When Egypt’s army was deployed to restore order in the streets during the uprising that ended president Hosni Mubarak’s rule, Egyptians greeted the troops as saviours. But by the time the generals handed the country over to a civilian president in June this year, many Egyptians regarded the 16 months of transitional military rule as more oppressive than the 29 years under Mubarak.

“The military claimed to be the guardian of the revolution, and at first we all believed it, but over time we realised we’d been deceived,” says youth leader Mohamed Abbas.

Activists accuse the Supreme Council of the Armed Forces (SCAF), which assumed power after removing Mubarak in February 2011, of transforming Egypt from an authoritarian police state into a military dictatorship. They claim military leaders must be held accountable for the human rights violations and crimes committed during the interim period, including repeated crackdowns on unarmed protesters that left scores dead and injured.

Many of the alleged crimes stem from the military’s efforts to stamp out dissent during its rule. Protesters report suffering torture and humiliation while in military custody. They were among some 12,000 civilians handed down harsh sentences by military kangaroo courts.

President Mohamed Morsi, who took office on Jun. 30, sent senior military leaders into retirement and put together a fact-finding committee to investigate responsibility for alleged abuses by the military during the transition period. The committee, comprised of government and civilian representatives, is expected to present its findings and recommendations later this month.

But Morsi’s decision to award the state’s top honours to former SCAF head Hussein Tantawi and former Chief of Staff Sami Anan has worried activists, who fear the new president may have cut a deal to grant military leaders immunity from prosecution. A “safe exit” would allow the generals to keep their wealth and receive amnesty for any crimes or mistakes committed while in power.

Activists who saw blood spilled during clashes with military police are not willing to let the country’s former leaders off that easy.

“Before the revolution Egyptians were afraid to claim their rights,” says Abbas. “Now, we will never back down.”

The April 6 Youth Movement, a grassroots activist group that was instrumental in organising the protests that led to Mubarak’s ouster, has announced plans to bring charges against Tantawi and other former SCAF members for the deaths of protesters during the transition period. The group has also accused former military leaders of inciting violence against peaceful demonstrators.

“We hold SCAF leaders responsible for killing protesters in clashes, the deaths of Christians at Maspero last October, and rumours and lies about protesters (that led to violence against them),” says Ahmed Maher, the group’s leader.

The case is one of many. Lawyers and activist groups have filed over two dozen complaints with military prosecutors against former SCAF members and senior security officials they accuse of betraying the revolution and committing crimes against the Egyptian people.

One obstacle, say campaigners, is that Egyptian law grants military officers immunity from civil prosecution. Article 8 of the Code of Military Justice stipulates that military courts are the only judicial authorities able to try serving or retired military officers.

“Military courts would neither be credible nor transparent,” argues Heba Hegazi, coordinator of the Hakemohum (“Prosecute Them”) campaign, which aims to move the trials to civilian courts.

In another case, a military court convicted three soldiers of manslaughter for running over Coptic demonstrators with armoured personnel carriers during clashes at Maspero last October. Yet no senior officers were put on trial, despite evidence that SCAF had purposely spread fear and rumours in order to stoke the violence and inflame sectarian sentiments.

The Hakemohum campaign hopes to enact legislation that would strip former military leaders of their immunity, allowing them to be tried in special civilian courts in cases where crimes against the public are involved. A draft law submitted to parliament before it was dissolved in June outlines the jurisdiction and procedures of these “revolutionary justice courts” which would adhere to international standards of integrity and transparency.

“The courts would be presided over by judges selected (from a list of candidates) vetted to guarantee they had no loyalties to the old regime,” Hegazi explains.

Many Egyptians were disappointed by the outcome of the trial of Mubarak and his senior aides. While a civilian court sentenced Mubarak and former interior minister Habib El-Adly to 25 years in prison for killing over 800 protesters during last year’s uprising, the tedious and farcical trial absolved senior security personnel of any responsibility in the killings.

Hegazi says SCAF has consistently worked to protect its leaders and cover up abuses. Yet she is confident that those who abused their power will be held accountable for their actions.

“Before the revolution we would never have imagined that we could remove Mubarak and put him on trial, but we did,” she says.