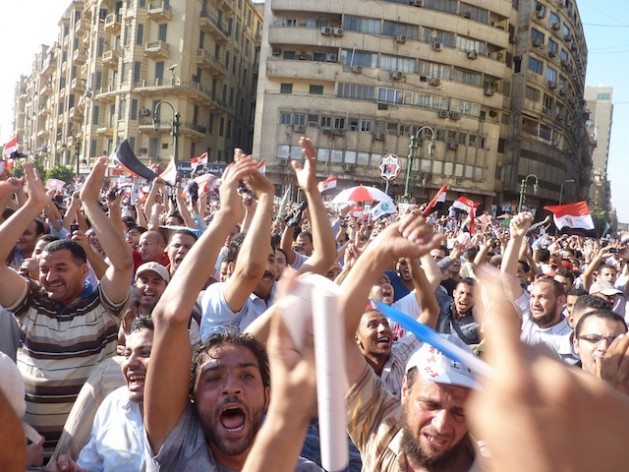 Protests across Egypt have not brought a right to information. Credit: Khaled Moussa al-Omrani.

CAIRO, Jul 24 2012 (IPS) - During the uprising that ended Hosni Mubarak’s 29-year rule, Egyptian protesters stormed state security headquarters in Cairo. Inside they discovered a trove of documents – including surveillance reports on activists, transcripts of telephone conversations, and intercepted emails – that revealed the meticulous records the state kept on the activities of its citizens.

By contrast, Egyptian citizens know very little about the activities of their own government. Successive regimes have prevented the public from obtaining documents and data that permit meaningful government accountability. Rights watchdogs say the secrecy fostered an atmosphere of corruption and impunity.

Public access to information would make the government more transparent, says Toby Mendel, executive director of the Halifax-based Centre for Law and Democracy (CLD). It is also a fundamental principle of democracy.

“Citizens elect the government with a mandate to serve their interest and operate using public money,” Mendel told IPS. “So the idea that the government owns information is inconsistent with what a government is supposed to do.”

The availing of information permits public engagement in the government process – everything from community planning to elections.

“For citizens to participate in the public decision-making process they must have access to the information on which these decisions are based,” Mendel explains. “If, for example, you want to build a road, you need to know where the road is going, the rationale for building it, and its cost/benefit analysis.”

At least 90 countries have enacted national legislation that establishes the right and procedures for the public to request and receive government-held information. In May 2011, Tunisia became the second Arab country after Jordan to adopt freedom of information legislation, fulfilling a promise of its provisional government to end the media silence and unaccountability of the former regime.

Following Mubarak’s downfall in February 2011, civil society pressed Egypt’s interim government to demonstrate a break from its authoritarian past by taking similar initiative.

A report by the Egyptian American Rule of Law Association (EARLA) released in April argues that a freedom of information law (FOIL) would enhance the transparency and accountability of Egypt’s new government. It could also stem the rampant corruption that debilitates the national economy and political system.

“Such laws provide citizens an opportunity to engage in oversight over their government officials to ensure the public treasury is spent towards the country rather than embezzled into officials’ private accounts. Similarly, businesses use FOIL to assure they have a fair opportunity to bid and receive government contracts based on quality and competency as opposed to nepotism and cronyism,” the report said.

Under Mubarak, the government suppressed attempts by rights groups to introduce bills to parliament that would open information channels or increase public oversight and accountability. After the uprising, however, the government sought loans from international donors to shore up the country’s battered economy. One of the conditions, sources say, was a tacit agreement to enact legislation that improves transparency.

The World Bank commissioned Mendel to draft a freedom of information law for the Egyptian government. But in June 2011, having revised its budget, Egypt’s military-run government declined a 3.2 billion dollar World Bank/IMF loan and shelved the bill.

“During that time, civil society took the draft I’d prepared, modified it, then presented it to parliament,” says Mendel. “The government also worked on the (original) draft and subsequently popped out its own bill.”

Legislators were debating the two draft laws when parliament was dissolved last month. Both bills share common articles, but differ in their disclosure procedures and list of exemptions.

The government draft law treats access to information as a privilege that is granted. It provides a mechanism for citizens to request information, but only requires state institutions to provide data “whenever its disclosure realises a legitimate interest.”

Mendel says it was important for the drafts to establish an independent review body that ensures government compliance with the law. Citizens can appeal to the information commissioner – which may be an individual or a committee – if they believe a request for information is unfairly denied or delayed.

The information commissioner should also have the authority to determine whether the government has correctly classified information as an exclusion – a category by which the right to information can be denied. Many FOILs have stumbled on this point. India’s, for instance, excluded many state agencies and projects from disclosure obligations on the pretext of national security concerns.

Broad and vague exclusionary clauses make it easier for officials to conceal information that could expose mismanagement and corruption.

“A big sticking point for Egypt was the question of whether the military would be excluded (from the scope of the law),” says Mendel. “The military is reputed to control about 40 percent of the national economy, including state-owned enterprises and many regular businesses. Not bringing that massive operation under the law was unthinkable.”

According to historian and military analyst Robert Springborg, Egypt’s generals own land and run factories, draw freely from the state budget, and receive an annual 1.3 billion dollars in military assistance from Washington. Yet their holdings and expenditures are shielded from public scrutiny – reporting on them is a criminal offence.

“The military has access to public resources that are not accurately recorded in the state budget, and even the parliament doesn’t know how these funds are utilised,” says Springborg. “The generals can use the direct payments they receive from the treasury almost without any oversight or accountability.”

Rights advocates say the battle to make the military and other public agencies more accountable to the people goes beyond the drafting of freedom of information legislation. Egypt has a number of pre-existing laws that restrict access to government-held documents and data.

They say it is imperative that any new FOIL explicitly supersedes all previous laws, or that the right to information is enshrined in the new constitution, due to be drafted soon.