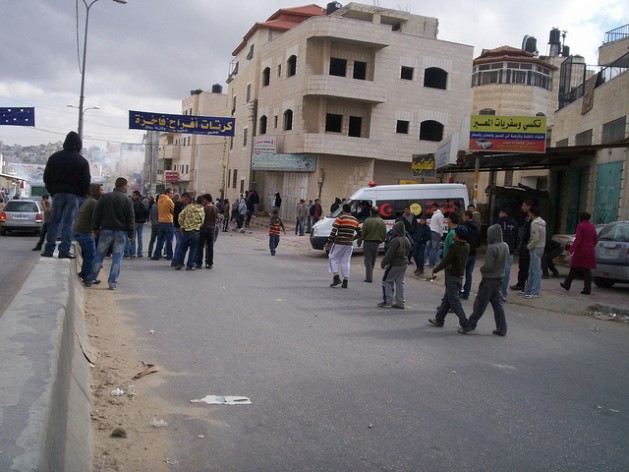 WASHINGTON, Sep 20 2012 (IPS) - With a shortfall of some 400 million dollars this year, the Palestinian Authority (PA) faces a “deepening fiscal crisis”, according to new reports released here Wednesday on the eve of a critical donors’ conference by the World Bank and the International Monetary Fund (IMF).

The two agencies said they hoped donors, who will meet at the U.N. Sunday, will help bridge the immediate gap, but that the PA’s viability depends in the longer run on Israel’s easing curbs on private investment and other initiatives to spur economic growth, especially in Area C, the 61 percent of the West Bank that remains under the Jewish state’s control.

“(R)estrictions put in place by the Government of Israel continue to stand in the way of potential private investment and remain the major impediment to sustainable economic growth,” the World Bank said in its 21-page report, entitled ‘Fiscal Crisis, Economic Prospects, The Imperative for Economic Cohesion in the Palestinian Territories’.

“Most notably, the continued geographical fragmentation of Area C (envisaged under the Oslo Accords as a temporary arrangement) poses a binding constraint to real economic growth, essential to support the future Palestinian state,” it said.

“Area C’s significance, as the only contiguous land in the West Bank connecting 227 separate geographical areas, is the key to economic cohesion and is the most resource abundant space in the West Bank holding the majority of the territory’s water, agricultural lands, natural resources, and land reserves that provide an economic foundation for growth in key sectors of the economy,” according to the report, which noted that expanding Jewish settlements in the same Area, unburdened by similar restrictions, were capitalising on opportunities the land offers.

The two reports, as well as the donors’ meeting, come amidst growing public discontent with the PA, which last week was forced to cut taxes and restore fuel subsidies that had triggered widespread popular protests against the government headed by Prime Minister Salam Fayyad.

The Bank report noted that the budget shortfall coincides with other worrisome developments, including an economic slowdown; reduced donor assistance, notably from wealthy Gulf states; and “few positive prospects in the broader political environment”, a reference to the total lack of progress toward the creation of a Palestinian state coupled with the continuing expansion of Israel’s settlement enterprise.

All of these factors, as well as the continued split between Fatah, which runs the PA, and Hamas, which has governed the Gaza Strip since 2006, have raised new questions here and in the region about the viability of both the PA, as it is presently constituted, and the so-called two-state solution to the Israeli-Palestinian conflict.

The issue has even entered the political campaign here. While the Republican platform reaffirms the party’s support for a two-state solution, its presidential nominee, Gov. Mitt Romney, told a private audience of donors in May, according to a just-leaked video of his remarks, that the Palestinians didn’t want peace and that the best U.S. policy was to “kick the ball down the field and hope that ultimately, somehow, something will happen and resolve it.”

Romney has already drawn fire for remarks he made while visiting Israel in late July. Without noting the ways in which the Israeli occupation has inhibited the growth of the Palestinian economy, the candidate asserted the two-to-one disparity between Israeli and Palestinian per capita income – in reality, it is more like 10 to one – could be explained by the differences in “culture” between the two populations.

The Bank and IMF reports did not address any cultural differences, but they both made clear that by far the most important constraint on the Palestinian economy was related to the Israeli occupation and the ways in which it discouraged investment.

The Bank’s report, which reiterated its previous assessment that the PA had made great strides in building key institutions and compares “favorably to other countries in the region and beyond”, is particularly damning about the effects of the occupation.

“Continued financial support by the donor community, and increased reform efforts by the PA, to be fully effective,” it said, “should also be combined with stronger action by the GoI (Government of Israel) to significantly ease remaining obstacles that prevent the Palestinian private sector from becoming the real engine of sustainable growth – the only medium term solution to exit from protracted fiscal crisis.”

The report offered many examples of how the occupation hinders investment, noting that, “Movement into and out of the West Bank continues to be severely constrained by a multi-layered system of physical, institutional, and administrative restrictions that have fragmented the territory into small enclaves lacking most forms of economic cohesion.”

Israel controls visas to enter the Palestinian territories, it said, and investors “report facing high levels of uncertainty in obtaining such permits which discourages them from exploring potential business opportunities.”

In addition, tight curbs on the import of “dual use” items that Israel regards as possible security threats, as well as restrictions on access to such resources as water and the electromagnetic spectrum, also harm the development of the Palestinian private sector. And traditional exports from Gaza to the West Bank and Israel itself have been cut drastically.

The report places particular emphasis on Area C, a relatively sparsely-populated part of the West Bank, which, under a 1995 Interim Agreement under the Oslo Accords, was to be “gradually transferred to Palestinian jurisdiction”. It includes 63 percent of the West Bank’s agricultural lands, including the highly fertile Jordan Valley.

The report detailed major opportunities for private investment in telecommunications, tourism, housing and construction, agriculture, and in small and medium enterprises, but that Israeli control, as well as the growth of Jewish settlements and infrastructure, such as highways and telecommunications towers reserved for Israelis, made Palestinian development in these sectors problematic or impossible, in major part due to the inability to obtain building permits from the Israeli authorities.

The Bank report noted particular concern with the high level of youth unemployment – 26 percent in the West Bank and 43.5 percent overall. The IMF report warned that the economic continued slowdown, an increase in unemployment and the worsening fiscal crisis were “bound to fuel social upheaval”.