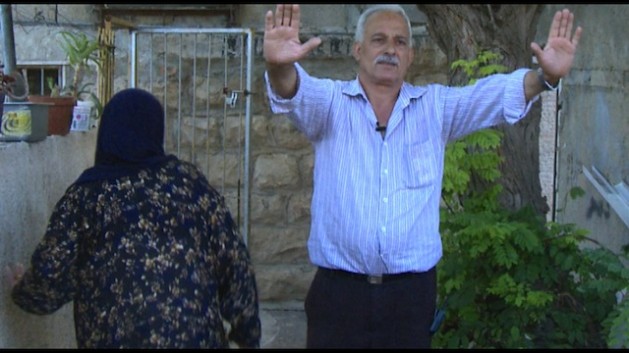 Badr Abu Ad-Dula at the entrance of his home. Credit: Pierre Klochendler/IPS.

SHEIKH JARRAH, Occupied East Jerusalem, Sep 18 2012 (IPS) - “See the bullets from the 1948 and 1967 wars,” Badr Abu Ad-Dula says, showing the scars of the old frontline on the outer walls of the building where he and his family of 13 live. “Here’s the Jordanian outpost.” The elderly Palestinian points at a loophole, now a bedroom window.

Across the narrow street, a nondescript mound of corrugated metal and oxidised barbed wire marks the now non-existent border.

Ad-Dula’s house is located on the pre-1967 no-man’s-land between the city’s eastern and western sectors. Forty-five years on, the three-storey building has become one of the multiple frontlines within Palestinian neighbourhoods in East Jerusalem.

The five families who live there under one roof – 70 people all in all – are united against a common threat – that of eviction by an Israeli settler group called Nahalat Shimon whose purpose is to settle Jews in the neighbourhood.

During the Jordanian rule interlude (1948-1967), Palestinians – many of them refugees – were granted squatters’ rights in East Jerusalem houses under the jurisdiction of the Jordanian Custodian of Enemy Property, and replaced the former Jewish residents who’d vacated their homes and went to live on the Israeli side.

Ultra-nationalist Israelis invoke Israel’s Absentee Property Law imposed on the occupied part of the city in order to evict Palestinians from houses where they’ve now been living for decades.

Up the street, a Jewish activist comes out of an Arab house that, up until four years ago, was exclusively occupied by the Al-Kurds. Graffiti scribbled on the front leaves no doubt as to the bitter conflict that pitted the Israeli intruders against the Palestinian family. “Free Palestine – of Leftist scum”, it reads.

“Pro-Palestinian activists wrote their part; we added ours,” says Yaakov Fauci, one of the Jewish tenants who now occupy the front rooms. The Al-Kurds were relegated to the back of the house.

“(Israel’s) Supreme Court ruled in our favour,” he adds. “But the front is an illegal extension of the original construction in the back. It didn’t have building permits, and thus was in violation of the squatters’ rights agreement.

“So the Court ruled that the Arabs had to move out to the back. We actually moved into the illegal annex,” he says.

“It’s a strange situation – unprecedented in Israeli law, one might say: we legally live in an illegal building,” Fauci concedes, “but lots of strange things happen nowadays. It’s just a very bad situation.”

Enforced by means of legalistic battles which can last for years, forced cohabitation is closely monitored, under surveillance, so to speak. Houses occupied by Jewish settlers are equipped with CCTV cameras.

And, there’s no genuine co-existence when the mutual perception is that national existence is at stake. “Everybody minds their own business. We must hold on to what we have,” declares Fauci.

Down the street, “to hold on to what we have” reflects precisely Badr Abu ad-Dula’s mindset.

“I’m only getting out of here with the bulldozers,” angrily warns the head of the family, mimicking a caterpillar forklift with his arms. “I’ve lived here for the past 57 years. I’m staying here – that’s it.”

Ever since he was three years old, ad-Dula has been living in this building. Following the 1948 war, it was abandoned by its Jewish owners. At the time, the ad-Dulas lived in the Old City. They were poor.

Granted squatters’ rights by the Jordanian authorities in 1955, they moved into what’s now home. “Nobody wanted to live here, close to the border. We were considered crazy,” he recalls.

A couple of months after the city’s re-unification under Israeli rule in 1967, the Jewish owners’ heirs set to claim back their property.

Yet two years ago, the “rightful” owners sold the property to U.S. Jewish tycoon Irving Moskowitz, the backer of many settlement projects within Palestinian areas of the city.

The case is now back in court. “Moskowitz wants to evict all the Arabs from here. I don’t care. There’s a court ruling. We pay our rent,” protests Ad-Dula, who works as director of maintenance at the nearby Mount Scopus Hotel.

This is a house which the tenants persist to call home. Ad-Dula’s neighbour, Umm Auni Bashiti claims that her family had “four shops and seven houses” in the Old City’s Jewish Quarter before 1948. “Let the Israelis give those properties back to me,” she says.

Yet, Israelis enjoy a privilege that Palestinians don’t have – the return of property abandoned in the wake of the 1948 war.

The settlers’ rationale goes like this: “East Jerusalem properties were taken over by legitimate war and conquest,” affirms a settler neighbour who wouldn’t divulge his name.

“However, if they want to challenge us legally, I’m sure that they’ll have their day in court,” he adds confidently.

The settlers are self-assured – soon, they believe their multiple legal battles over ownership rights and deeds in East Jerusalem will cement an irreversible reality.

Meanwhile, the Israeli government’s laissez-faire policy in the face of the settlers’ resolve is only deepening the diplomatic stalemate. “The way to peace is assertion of our claims and rights,” is the settlers’ motto.

In times of uncertainty, it’s also time to seek comfort in family, and pray. “I wish my children and grandchildren would live here all their lives like me. But they’ll have to leave,” predicts Ad-Dula. “The settlers have laws and lawyers; we’ve got only God’s justice.”

(This is the second of a two-part report on the battle being waged by Israeli settlers over land and real estate within Palestinian neighbourhoods in East Jerusalem.)