Stevia, a Flourishing Business in Spain 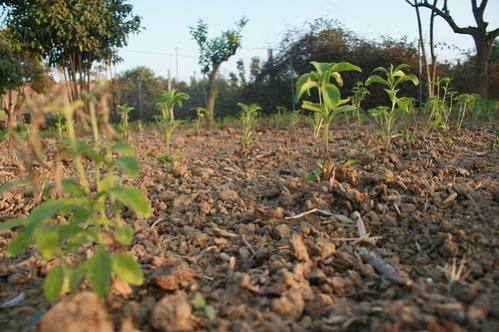 The field where the Unemployed Workers Movement of Málaga has planted 2,000 stevia seedlings. Credit: Inés Benítez/IPS

MÁLAGA, Spain, Sep 26 2012 (IPS) - On a parcel of land a few kilometres outside the southern Spanish city of Málaga, unemployed activists are growing 2,000 seedlings of stevia, a plant used by the Guaraní indigenous people for centuries as a natural sweetener that is awakening ever greater interest in Spain.

Stevia rebaudiana bertoni, called ka’a he’e or “sweet herb” by the Guaraní, originates from the Amambay mountain range between Paraguay and Brazil.

The glycosides extracted from the plant – stevioside and rebaudioside A – are 300 times sweeter than cane sugar, have no calories, and are suitable for consumption by diabetics, according to numerous studies.

“This parcel of land is a pilot test so that we can see how it evolves, gather our own data and gain experience,” said Diego López of the Unemployed Workers Movement of Málaga, which is promoting the project among people who are currently out of work.

China is the world’s largest producer and consumer of this natural alternative to artificial sweeteners. It is also the source of most of the stevia plant extracts exported to other countries, according to the European Stevia Association (EUSTAS).

Stevia is also extensively grown in Paraguay, Colombia and Chile. And plantations are beginning to be established in Spain as well.

While watering the 300-square-metre plot of land at sundown, López, who holds a degree in marine sciences, comments that “stevia has more potential than it seems.” This project, he believes, could encourage farmers in the province to embrace this new crop.

A few years back, the use of stevia was limited to a few specific sectors of the Spanish population, such as diabetics. Its use became more widespread in 2011, when it was authorised for use as an additive in different foods, EUSTAS member José Cruz Cavero told Tierramérica*.

On Dec. 2 last year, the European Commission authorised the use of steviol glycosides extracted from the plant’s leaves as a food additive.

EUSTAS, a non-profit association that brings together members of the academic community, manufacturers and importers, was the first organisation to request the authorisation of stevia as a food additive, on Sep. 26, 2007, in an application to the European Food Safety Authority.

Once stevia was approved, U.S. corporations Coca Cola and Cargill registered some 20 patents for the use of stevia extracts in their products.

Azucarera Española, with which Cargill has a distribution partnership in Spain, launched a sweetener under the brand name Truvía on the Spanish market this year. The product contains a mere one percent stevia extract; its main ingredient is erythritol, a sugar alcohol.

The extraction of glycosides from the stevia plant must result in a product with a minimum stevioside content of 95 percent, in accordance with the standards approved by the European Union, explained Andrés García-Granados, a chemist at the company SteviGran and a professor at the University of Granada.

SteviGran, founded in 2010, operates stevia plantations in central Paraguay and in Granada, in southeast Spain. It has developed a “biofactory” for the mass production of seedlings, and markets around 20 products derived from stevia, García-Granados told Tierramérica.

“The demand for stevia is exploding,” declared Miguel Arrillaga, owner of the Málaga-based company De Pr1mera, which has some two million stevia plants growing in various parts of southern Spain and takes in over 26,000 dollars monthly through the sale of the dried leaves of the plant, stevia extract in liquid and powder form, capsules and jams.

De Pr1mera has been in business for 11 months and has 15 hectares of land planted with stevia, but it imports stevia extract in powder form from China and Paraguay. “The next step is to install a stevioside extraction plant in southern Spain, using ecological processes,” said Arrillaga, a telecommunications engineer.

In a coffee shop, Arrillaga holds up a few packets of sugar and predicts that they will soon be replaced by stevia, “because we have natural alternatives to the products imposed by the food multinationals,” and consumption trends are changing.

The sale of dried stevia leaves as a “novel” food product – in bags for the preparation of infusions, for example – is still not authorised in Europe.

A request for this authorisation submitted in July 2007 to the European Commission Scientific Committee on Food “is at a standstill,” said Mónica Lorenzo of the company Anagalide, a member of EUSTAS.

But it is possible to find bags of dried leaves at herbalist shops and on internet shopping sites. Numerous studies confirm the health benefits of stevia for diabetes and high blood pressure, as well as its antioxidant and bactericidal properties.

Arrillaga thinks it is “ridiculous” that the sale of the plant’s leaves as a food product has yet to be permitted, while stevia extracts are authorised for use as a food additive – which benefits big companies.

“It’s the herb for diabetics,” commented the manager of a plant shop in downtown Málaga, pointing to a number of pots with stevia growing in them in the doorway of her store.

The director of the Spanish Federation of Diabetics, Mercedes Maderuelo, said that stevia has become popular as an alternative to artificial sweeteners among the group’s 5.3 million members, since it has no calories and no saturated fats.

Lorenzo stressed that “the green extract is more effective in helping to regulate blood insulin levels.”

The experts consulted concur that the crystallised stevia imported from China is not reliably safe. “I have even found metals like lead or pesticides in it,” said chemist García-Granados.

“There is a lot of stevia on the market, but it is often of poor quality. This is the main problem,” said Lorenzo. EUSTAS hopes to create an international gene bank that could be used by people who want to grow the sweet herb.