Organic agriculture is a growing trend in big cities around the world, including Latin America, and now the favelas of Brazil are no exception. 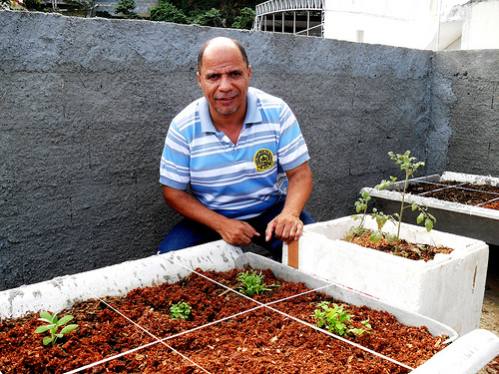 Luiz Alberto de Jesus with the newly sown planters on his balcony in the Babilônia favela. Credit: Fabíola Ortiz/IPS

RIO DE JANEIRO, Sep 25 2012 (IPS) - You do not need to live in the countryside to grow vegetables, as hundreds of thousands of people involved in urban agriculture from Havana to Buenos Aires know very well. Now they are being joined by residents of Rio de Janeiro’s “favelas”.

Plants can flourish in the middle of the city, everywhere from community gardens to the rooftops and balconies of homes in Brazil’s poorest neighborhoods.

A pioneering initiative is now underway in two favelas or shantytowns in particular: Babilônia and Chapéu Mangueira, both located in the southern Rio de Janeiro district of Leme.

The initiative forms part of Rio’s Sustainable City programme, being carried out by the Brazilian Business Council for Sustainable Development (CEBDS). So far, 16 residents of the favelas have volunteered for five months of training in techniques for growing crops in household planters.

Organic agriculture is a growing trend in big cities, said Marina Grossi, president of the CEBDS. “Not only because people want organic food, but also because it shortens distances and generates income.”

In Cuba, urban farming dates back more than two decades and has been a resounding success. Last year’s yield of vegetables and herbs was more than a million tons, while the country’s total horticultural production was 2.2 million tons.

The sector employs around 300,000 people, and the products are sold without intermediaries. Small livestock and poultry farming have also been incorporated, and training is provided on issues such as soil improvement, water management and agroecological pest control.

In 2007, the Cuban government decided to extend urban agricultural production to the suburbs, largely through small farms organized into cooperatives.

Brazil, with a population of 192 million, is a world power in agriculture, primarily on the basis of export-driven agroindustrial production. But there are a mere 120,000 urban farmers, and just over half of them receive support from the government to maintain their crops and supply food for their own needs and local markets.

“We did a survey to find out what the residents of Babilônia and Chapéu Mangueira eat. And we decided on a system of continuous production based on agroecology,” with no chemical fertilisers or pesticides, explained the coordinator of the organic agriculture course, Suyá Presta.

The highest possible degree of diversification is achieved in every single planter. “Every week new seedlings are planted so that production never stops,” Presta told Tierramérica*.

Luiz Alberto de Jesus, a 52-year-old resident of Babilônia, is one of the students taking the course. He has a second-floor balcony where he shares a garden with four neighbors.

“When I first heard about organic food I didn’t know what it was. There is no mystery to producing food, you can grow it in planters in very small spaces. I used to think you needed a big piece of land to plant food,” he said.

In his garden there is lettuce, arugula, watercress, cherry tomatoes, rosemary and mint. The first harvest will be in February, and the apprentice farmers are anxiously awaiting it.

“I want to raise people’s awareness so that they will eat organic products. I’m going to pass this information on to the young people and children,” he added.

In 1990, Argentina launched its successful Pro-Huerta programme, aimed at promoting small-scale organic farming in both urban and rural areas. In 2005, the initiative was “transplanted” to Haiti, and helped spare many families from hunger when the 2010 earthquake demolished the capital and other cities.

As one of the food sovereignty strategies adopted in Venezuela, a major importer of food, urban agriculture has been actively promoted since 2004.

There are no consolidated figures on the volume of food produced by the country’s urban and peri-urban agricultural production units (UPAs), nor on the number of consumers or people working in these initiatives.

However, national volumes of horticultural production for a market of 29 million inhabitants suggest that urban agriculture does not feed more than several thousand or perhaps a few tens of thousands of families.

According to official statistics, there are some 20,000 registered urban UPAs, of which 2,400 have been consolidated and another 4,000 are in the process of doing so. In 2011, the Venezuelan government invested 2.5 million dollars in this sector, according to the Ministry of Agriculture and Land.

In Caracas and eight states, primarily in northern Venezuela, vegetables and aromatic and medicinal herbs are planted. There have also been forays into the raising of fruit crops – bananas, papayas, oranges, mandarins – as well as the production of organic fertiliser.

But there are other factors involved in the equation in Venezuela.

The Women’s Development Bank (Banmujer) provides financing for these initiatives as a means of combating the feminisation of poverty and the loss of agricultural roots among the poor sectors of the population who move from the countryside to towns and cities.

In 2010, 47 percent of the microcredits provided by the bank were for agricultural activities, and “many of these are in urban and peri-urban areas,” said Nora Castañeda, the president of Banmujer. “We now have women farmers who devote themselves full-time to this work and put incredible effort into it,” she told Tierramérica.

“One of our clients, a woman peasant farmer who was abused by her husband for more than 20 years, recently came to give us a course on how to produce humus,” she recounted.

“For her, the most important thing isn’t being the farmer that she is today, but having overcome a situation of violence, thanks to an economic foundation that made her stronger and more valuable, even in her own eyes,” said Castañeda.

Self-worth was also mentioned by Rio resident Reina Maria Pereira da Silva, 58, who was inspired by the CEBDS course to plan a garden for her own house.

“I have learned something new. It’s never too late, and this has also raised my self-esteem. I feel more capable. It’s wonderful to harvest healthy food that I planted myself,” she told Tierramérica.

“I always liked to plant things, but I didn’t know how. There are techniques and planning involved, such as the time when you should harvest in the summer and the winter. Everything we grow is going to be for our own use and to donate to schools,” she explained.

By 2050, 90 percent of the population of Latin America will live in cities. Today, 111 million people in the region live in overcrowded neighborhoods like favelas, according to the United Nations.

The demand for food will be greater, and there will be fewer people to produce it in rural areas.

This means that urban agriculture is both a “strategy of emancipation” and a significant means of improving the quality of life in cities, said Hélio Tomaz Rocha, the coordinator of urban and peri-urban agriculture at the Brazilian National Secretariat for Food and Nutrition Security.

Rocha advocates the planting of urban gardens in vacant lots in metropolitan areas, which are otherwise used as dumping grounds, for the establishment of slum housing, or for real estate speculation.

He also highlights the need for a specific public policy to promote urban agriculture. “We know that it works, that there is space available in cities, but there is no formal system. It is moving towards greater sustainability, but it needs an initial boost,” he commented.

The Brazilian government began to provide funding for urban agriculture projects in 2003, and many of the beneficiaries are also beneficiaries of the Bolsa Familia cash transfer programme.

A total of close to 20 million dollars were invested in the sector as of 2010, through agreements with municipal and state governments, benefiting 74,000 people who were employed in urban garden initiatives.

Of the projects that have been carried out in Brazil, 38 percent are concentrated in states in the southeast and 30 percent in the south, while the remainder are divided among other regions, except for the north and northeast.

This year, close to five million dollars will be invested in 42 initiatives selected through an annual competition. The majority will be carried out in the northeast, with 17 municipalities participating.