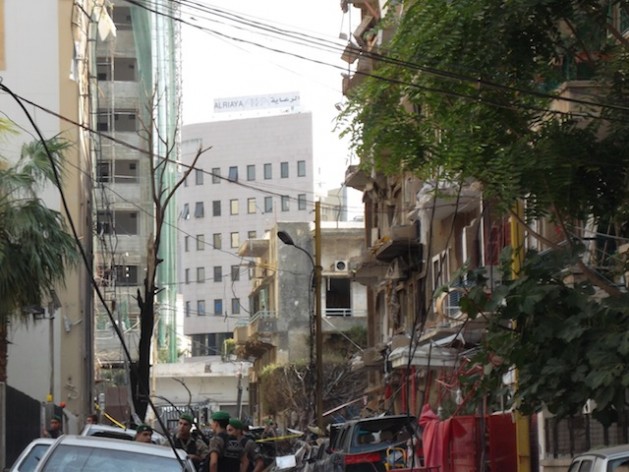 The street of the bombing in Beirut that killed Wissam al-Hassan, chief of Lebanon’s internal security services. Credit: Dalila Mahdawi/IPS.

BEIRUT, Oct 21 2012 (IPS) - The assassination of Lebanon’s top security official on Friday not only ravaged a quiet Beirut neighbourhood but also shattered the precarious sense of security many Lebanese have been desperately clinging to in recent months.

Wissam al-Hassan, chief of Lebanon’s internal security services, was killed by a massive car bomb in which seven others died and 100 were injured. He had just returned from Paris, to where he had moved his family amid concerns that he was being targeted for assassination.

“We suffered so much in the civil war and those memories are all coming back now,” said Anissa Bushrush, a resident of a nearby street. “People know each other in this neighbourhood but now I feel there is no safe place left. I couldn’t sleep last night because I was so terrified.”

The assassination occurred in a densely populated side street in Beirut’s predominantly Christian Achrafieh neighbourhood. Striking just before rush hour, it caused massive damage, tearing off balconies, smashing windows and sending a tower of black smoke high into the air.

Hassan was considered a controversial figure because of his close personal affiliation to Rafik Hariri, Lebanon’s former billionaire prime minister assassinated in 2005.

His killing is “a big loss for the security of Lebanon,” Walid Moubarak, director of the Institute for Diplomacy and Conflict Transformation at the Lebanese American University told IPS. Hassan had been responsible for uncovering significant security breaches in Lebanon, including Al-Qaeda, Israeli and Syrian operatives.

He was an investigator for the Special Tribunal for Lebanon, the international court tasked with prosecuting Hariri’s killers and which eventually blamed Syrian and Hizbullah agents. Earlier this year, Hassan had played a major role in the arrest of former information minister Michel Samaha for plotting terrorist attacks against high-profile Lebanese figures.

“He was a major obstacle for many groups inside and outside of Lebanon,” said Moubarak. “His death means they can now act in Lebanon much more freely. I hope Lebanon’s political leaders are conscientious enough to stay united.” Any divisions would only aid further violence, he said.

No one has yet claimed responsibility for Hassan’s assassination, the first in four years, but many Lebanese blame Syria. There were 11 assassinations or attempted assassinations between 2005 and 2008, all targeting outspoken critics of the Syrian regime. Tensions between the two countries have reached a critical point in recent months as political violence in Syria has begun to spill over the border.

“I’m divorced and I have a ten-year-old son to support. I’ve worked so hard to provide for us over the last few years and now I’ve lost everything,” wept Nancy Joseph Maineh, whose ground floor home was just yards from the site of the attack.

Carrying bags of her belongings away from her destroyed apartment, Maineh said she had “no idea” what the future would hold for her or the Lebanese people.

In a statement following the attack, Syria’s Information Minister Omran al-Zoubi rejected his country’s involvement, condemning the killing as  “unjustifiable” and “cowardly.”

Analysts say the perpetrators had infiltrated Lebanon’s security services. “It’s very clear that there was circulation of information from inside our institutions to the people responsible for Hassan’s killing,” said Fadia Kiwan, professor of political science at the Saint Joseph University in Beirut. “Somebody saw his name on the manifest at the airport and informed his killers.”

Kiwan suggested Hassan’s demise heralded the beginning of another dark chapter of political violence in Lebanon. “I don’t wish to disseminate pessimism but we have to be realistic. These people are not playing games, they greet each other with death.”

In the wake of the killing, gunmen with scarves around their faces have taken to the streets across Lebanon, blocking roads with burning tires and opening fire at passing cars.

“It’s a predictable pattern that we often see in reaction to political events here,” Timor Goksel, former professor of conflict management at the American University of Beirut and senior advisor to UN peacekeeping force UNIFIL told IPS. “Some people take this as an opportunity to vent their anger about whatever they’re angry about in life. I don’t think it will escalate.”

Others, however, were less optimistic. One man was on his way back from Beirut airport early Saturday morning when his car was stopped at a makeshift checkpoint. After showing the men his identity papers and agreeing to a car search, Rabih Baaklini was driving off when four masked gunmen opened fire. His car was hit by 16 bullets.

“I’m not politically active, I don’t support any political party and I’ve never voted,” Baaklini said. “If I can get shot at, then anybody in Lebanon can get shot at. Life is so cheap here.”