Brazil Shores Up Industry to Keep Its Place as Emerging Power

RIO DE JANEIRO, Oct 3 2012 (IPS) - The recovery of industry in Brazil, in the face of the global economic crisis that has accentuated the loss of competitiveness against manufactured products from abroad, is a high-priority task for the government in its attempt to keep the economy on a growth path.

The 3.8 percent drop in industrial production in the first half of the year, confirming a downward trend that began in October 2010, has made the effort to reduce the so-called custo Brasil, or “Brazil cost” – the high cost of doing business in this country – especially urgent.

The left-wing government of Dilma Rousseff has adopted a series of measures with the aim of reactivating the economy, or at least curbing the slowdown, including tax cuts, credit facilities, restrictions on imports, and incentives for domestic consumption.

The government’s latest initiatives focus on boosting production, especially in industry, the sector hardest hit by the current global crisis. 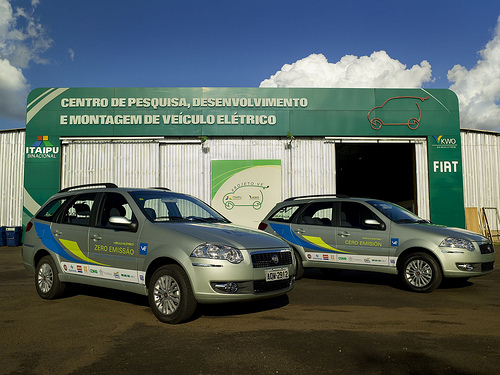 Industrial production in Brazil has been dropping since late 2010. Credit: Alexandre Marchetti, Courtesy of Itaipú Binacional

One measure was the 28 percent cut in electricity rates for the production of aluminium and cement, in effect since Feb. 28.

And two weeks ago, the government announced that other branches of industry would also be granted a reduction in electricity rates of between 20 and 24.7 percent, while households and shops will pay 16.2 percent less.

The cost of electricity in Brazil is among the highest in the world, even though most of the country’s energy comes from hydropower, the cheapest source. That contradiction largely has to do with the fact that electricity bills carry 25 different taxes and other expenses that amount to 45 percent of the final cost, according to the Instituto Acende Brasil, a think tank.

But not everyone agrees with the government’s plans. “The measures adopted are welcome, but they are a short-term reaction to the impact of the international crisis, when what are needed are long-term policies to strengthen the process of industrialisation,” economist Rogério Souza with the Institute for Studies on Industrial Development (IEDI), set up by business, told IPS.

Brazil needs “a modern, state-run industrial policy,” with planning that goes beyond the four- or eight-year period of a specific government, along the lines of China, which began by copying products and today “makes submarines, planes and home appliances,” he said.

What needs to be done, Souza said, is to identify in which areas key to industry and the economy to act, and to determine in which sectors it will be difficult to develop competitiveness.

This includes implementing policies “to favour some sectors, but requiring something in return: targets, timeframes and results,” he said. Companies have to invest, increase their productivity, and develop technologies, he added.

“I can’t imagine Brazil without strong industry,” said Souza, who argued that a country of 192 million people “cannot get by on services and primary products alone.”

He pointed out that Australia is rich, even though it depends on agriculture and mining. But it only has 22 million people, and does not need so many jobs, he added.

The example, he said, is the United States, which is “strong in every area.”

But Brazil is experiencing a process of premature deindustrialisation, say economists like André Nassif, Carmem Feijó and Eliane Araujo, the authors of a study based on statistics from 2011.

The main reasons for the setback in industry in Brazil, whose share of GDP plunged from 31.3 percent in1980 to 14.6 percent in 2011, are the large trade deficit in technology and the low productivity of labour, say Nassif and Feijó of the Fluminense Federal University, and Araujo of the State University of Maringá.

Brazil has posted a large trade surplus over the past 10 years. But that is due to the strong performance of agricultural and mining exports, which more than make up for the industrial deficit.

In the case of the electronics and chemistry sectors, imports already exceed exports by tens of billions of dollars a year.

But Mansueto Almeida of the governmental Institute of Applied Economic Research put the negative numbers in context, in an article published in mid-September. He pointed out that industry’s declining share of GDP formed part of a global tendency seen since the 1970s.

Nevertheless, he acknowledged that the sharper drop seen last year, when industry fell to 14.6 percent of GDP from 16.2 percent in 2010, was “worrisome.”

But since 2005, industry has had a trade deficit, which has grown fast in the last three years. The recession has reduced consumption in rich countries, driving down the prices of many products and generating a surplus of goods. Meanwhile, the real, Brazil’s currency, is overvalued against the dollar, which has favoured imports, the economist noted.

Another point that contradicts the argument that Brazil is experiencing a process of deindustrialisation is the growth of formal employment in the manufacturing industry, even in periods of shrinking GDP.

Nonetheless, Almeida is worried about the future of industry, because the cost of producing in Brazil has become too expensive.

To justify the measures that favour some sectors of the economy, President Rousseff argues that competitiveness must be boosted – an argument that has support from different currents of economic thought.

But there are many factors to be taken into account. The high cost of energy, the overvalued currency, a heavy tax burden close to the levels seen in Europe, the country’s precarious transportation infrastructure, and rising wages principally affect industry, because the costs accumulate along the entire production chain.

Everything indicates that Brasilia has decided at least to preserve the competitiveness of Brazilian industry, which is losing market share even to the rest of Latin America, the region that imports the most manufactured products from this emerging giant.

Among other reasons, Brazil is keen on the physical integration of South America because this region is where its industry is most competitive, which contributes to its regional leadership role.

Declining industry would also undermine the international leadership achieved by this country in the last few years, especially under the government of Luiz Inácio Lula da Silva (2003-2011).