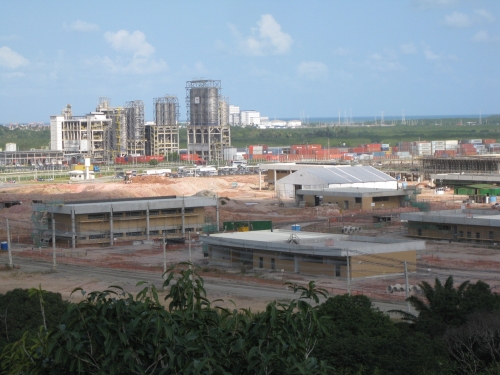 Suape Industrial Port Complex in the Northeast is in a process of constant expansion. Credit:Mario Osava/IPS

RIO DE JANEIRO, Jan 4 2012 (IPS) - In 2011, Brazil’s economy grew by less than half the 7.5 percent it attained in 2010. However, this result would be miraculous in any other country with the barriers to productivity and competitiveness that prevail in Brazil.

The base interest rate of 11 percent is the highest in the world in real terms, and the tax burden amounts to 35 percent of GDP, much higher than in the rest of Latin America and closer to that of European states, but without providing a similar level of social welfare.

Moreover, the enormous bureaucratic apparatus is a hindrance to business, and costs are also raised by the precarious transport infrastructure and the high price of energy, contradicting the official discourse on modest electricity costs based mainly on hydroelectric power.

To add to the difficulties in the international marketplace, the local currency, the real, has been in recent years the most overvalued with respect to the dollar. Consequently, the exports of several industries have fallen and imports have increased.

Manufacturers are issuing warnings about “premature deindustrialisation” because of the exchange rate imbalance, which is being accentuated now that Brazil is becoming an oil exporter, thanks to huge deep water reserves in the Atlantic ocean.

Luiz Aubert Neto, head of the Brazilian Machinery and Equipment Association (ABIMAQ), said that in 2005, 60 percent of the machinery sold on the domestic market was made in Brazil, compared to just 40 percent today. The sector’s exports fell by 27.7 percent between 2008 and 2010, while imports rose by 14 percent.

A “currency exchange war” is under way, Finance Minister Guido Mántega said just over a year ago. Some countries are devaluing their currency to boost their competitiveness, a matter that should be addressed by the World Trade Organisation (WTO), he said at the time.

Faced with pressure from manufacturers and evidence that Brazilian exports are increasingly made up of agricultural and mineral commodities, the government has been adopting protectionist measures, such as requiring that at least 65 percent of auto parts be of national origin for the vehicles to qualify for tax breaks.

But in spite of all the disadvantages, Brazil is one of the countries attracting most foreign investment, and it has just been recognised by the British Centre for Economics and Business Research (CEBR) as the sixth largest global economy, displacing the UK.

As one of the emerging powers grouped in BRICS (Brazil, Russia, India, China and South Africa), this South American country does not really stand out for its GDP growth, which averaged four percent a year between 2003 and 2010 during former president Luiz Inácio Lula da Silva’s two terms of office.

This indicator is close to the world average for the period, and has been outstripped by several other South American countries. But the interest of investors, economists and international authorities in Brazil is explained by the size of its internal market of 192 million people, and the level of economic development already achieved.

In some areas of the country, like the Northeast and the Amazonian state of Rondônia, it is practically a joke to speak of deindustrialisation. By contrast, industrialisation there is proceeding full-tilt, although in the old-fashioned way, driven by oil and metallurgy rather than electronics or new technologies.

In the arid, impoverished Northeast, construction of oil refineries, steel mills and shipyards – closely linked to ports designed as industrial and logistics complexes – is driving economic growth at a rate above the national average.

Inadequate infrastructure diminishes competitiveness but also acts as a galvanising factor, especially for the construction industry. Roads, railways, ports and bridges are being built, enlarged or repaired in every region of Brazil, along with social housing.

The number of projects has brought to a head the need for skilled labour, and there is a consensus that poor quality education is an additional hindrance to development and competitiveness.

Among the 65 countries assessed by the Programme for International Student Assessment (PISA), Brazil is always near the bottom of the ranking, especially in mathematics.

In order to meet demand, federal and state governments are rushing to provide technical schools, and companies are themselves undertaking training of local workers to work on infrastructure projects.

The Santo Antônio hydroelectric complex on the Madeira river in the Amazon region is being built with over 80 percent local labour, according to the consortium responsible for the project, and two-thirds of the workers on the Belo Monte complex on the northern Xingu river, on which work is just beginning, are local people.

“Now education is progressing, because there is a demand for it,” said Fernando Freire, head of the Joaquim Nabuco Foundation, a Ministry of Education social science research institute in Recife, the capital of the northeastern state of Pernambuco which is industrialising at the fastest rate in the country.

But economists say Brazil has another Achilles’ heel: the lack of technological innovation. Although it has recently expanded its scientific production, as measured by published academic papers, in terms of patents the country is far behind others at a similar stage of development.

There is much that can be said about the inconsistencies of the Brazilian economy, especially in some sectors being buffeted by competition from Chinese products. Nevertheless, Brazil is now close to what economists call full employment.

Unemployment fell to 5.2 percent in November, the lowest figure since 2002 when the statistics institute adopted its present methodology. All the indicators point to a reduction in inequality, and migration from poor regions like the Northeast to more developed areas like the southern state of São Paulo has ceased.

The economy is growing in spite of the hurdles, and the positive social and political effects are deeply felt, although GDP growth may not be as spectacular as that of China or some South American countries like Peru, where president Alan García left office in July 2011 with a low approval rating, in spite of the country’s high rate of economic growth.

In contrast, President Dilma Rousseff has an astronomical approval rating, as did former president Lula.