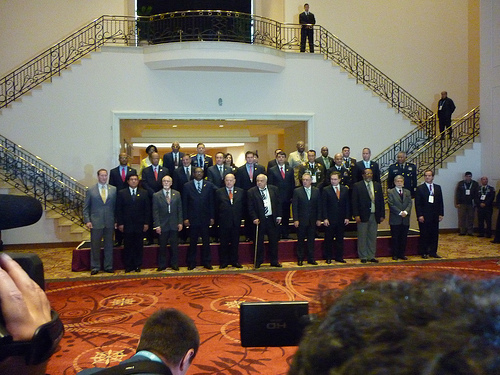 PUNTA DEL ESTE, Uruguay , Oct 11 2012 (IPS) - Although it admits that it cannot be a long-term solution, Washington insists on strengthening the armed forces in Latin America, to confront “new threats,” including citizen insecurity. But activists argue that it is only another means of maintaining control over the region.

The new U.S. military strategy is all too familiar to many activists. “What the government of that country is seeking is to use the armed forces of Latin America as it always has: for its own interests, and not for the security of the people,” human rights defender Adolfo Pérez Esquivel told IPS by telephone from Buenos Aires.

In the past, Washington evoked the phantom of communism. But now, in a region where many of the governments are left-wing, it uses as a pretext common problems like drug trafficking to strengthen its predominance, said the Argentine activist and 1980 Nobel Literature Prize-winner.

U.S. Defence Minister Leon Panetta, the envoy of the government of Barack Obama to the 10th Conference of Ministers of Defence of the Americas, which ended Wednesday Oct. 10 in the Uruguayan beach resort town of Punta del Este, outlined the new U.S. military policy for the region, based on strengthening bilateral and multilateral ties.

“Over the last two decades, our people, our economies, our cultures, and our values have become even more connected, not just because we are neighbours but because we are one family in this hemisphere,” Panetta said at the start of the three-day conference.

“And as one family, we confront many of the same threats that face our nations across borders and across oceans, from terrorism, to drug trafficking, to nuclear proliferation, to humanitarian disasters,” he said. “We cannot deal with these threats alone or in isolation; we can only deal with them if we work together.”

Pérez Esquivel is leading the campaign “Latin America and the Caribbean, a Region of Peace: Foreign Military Bases Out!” which opposed the summit in Punta del Este and the U.S. policy of involving the armed forces in law enforcement.

Questions of internal security are the sole jurisdiction of the police, and must remain under their orbit, with strict control of and respect for human rights, the campaign states in an on-line declaration.

Panetta himself admitted at the ministers’ conference in Uruguay that “the use of the military to perform civil law enforcement cannot be a long-term solution.”

However, the U.S. Department of Defence promised to continue to support the military in different countries in the region to combat the “new threats” until civilian security forces are trained to assume that role.

“But as partners, the United States will do what we can to bridge the capability gaps between armed forces and law enforcement,” Panetta stated.

With regard to military action against drug trafficking, Pérez Esquivel said: “They never get the big shots, the big traffickers of death, who are the ones who really control the drug business…There is also complicity between people in the armed forces and the drug trade. We have seen this in Colombia, Mexico and other countries.”

In Mexico, the outgoing conservative government of Felipe Calderón deployed more than 60,000 troops to fight the drug trade.

But human rights groups say the anti-drug campaign backed by Washington has cost the lives of 70,000 people and has forced 250,000 people to flee their homes.

Since 2000, the United States has also financed Plan Colombia, an anti-drug and counterinsurgency strategy.

In Honduras, meanwhile, the right-wing government of Porfirio Lobo is creating a new rapid response police force, the elite “Intelligence and Special Security Response Groups Unit” (whose acronym is Tigres, or tigers), as part of a strategy to militarise the fight against crime.

In those three countries, reports of human rights abuses by the military are rife.

“We are asking the state to protect the human rights of people who are going to receive that security,” the head of Amnesty International Uruguay, Mariana Labastie, told IPS.

“We are asking for due process to be observed, for a halt to illegitimate detentions, and for the laws not to undermine the rights of people, such as the right to assemble, the right of expression, or the right to free circulation,” she said.

But the U.S. pressure to design strategic plans did not find the hoped-for echo among the countries of Latin America. The delegations of the 28 countries taking part in the summit, of the 34 that make up the Organisation of American States (OAS), failed to reach a consensus on several issues.

Even ahead of the summit, there was agreement on the need to propose concrete steps to reform the inter-American defence system and its institutions, which date back to the Cold War. But the ministers merely urged the OAS to urgently address the issue.

There was no agreement on the future of the Inter-American Defence Board, created in 1942, which the United States wants to reform, or on the Inter-American Treaty of Reciprocal Assistance (TIAR), created five years later, which is now questioned by Bolivia, Ecuador, Nicaragua and Venezuela, and which Mexico pulled out of in 2002.

However, there was unanimous agreement with respect to peacekeeping missions. And after lengthy debate, the ministers approved, by a majority vote, the creation of a Cooperative System of Humanitarian Assistance to act in the case of natural disasters. The proposal was set forth by Chile and backed by the United States and Canada. Participation in the system will be voluntary.

The hottest debate was on Argentina’s claim to the Malvinas/Falkland Islands and its complaint about Britain’s maritime operations there.

Finally, in the closing declaration, the countries in the region – with reservations expressed by Canada and the United States – committed themselves to promoting peace in the south Atlantic and backed the OAS call to seek a diplomatic solution to the dispute between Argentina and Britain.