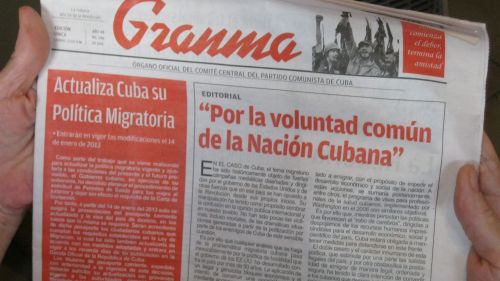 HAVANA, Oct 16 2012 (IPS) - The easing of travel restrictions announced by the Cuban government Tuesday was one of the most eagerly awaited reforms. However, limitations remain in place for professionals and others deemed essential to the country’s development or national security.

A new law that goes into effect on Jan. 14 will eliminate the requirement for an exit visa and a letter of invitation from abroad – bureaucratic hurdles that also drove up the cost of travelling.

“My right to travel like any other citizen of this world has been restored,” a woman who was standing in line to buy a newspaper remarked to IPS. “I heard the news on the radio, but I want to see if Granma has more details.”

Along with a news article on the reform, Granma, the Communist Party daily, ran an editorial on the subject and a link to the official gazette, which published decree-law 302 that modifies the current law that dates back to 1976.

In an email message to IPS sent from the United States, Sarah Stephens, executive director of the Center for Democracy in the Americas, said “This reform responds to the Cuban population’s highest priority wish to be able to leave and return to the island freely.

“It not only gives Cubans greater autonomy but it also offers the promise of a more vibrant economy, with more remittances sent from abroad, and more Cubans engaged in both exit and return,” adds the statement from the Washington-based CDA, which is devoted to changing U.S. policy toward the countries of the Americas “by fostering dialogue with those governments and movements with which U.S. policy is at odds,” according to its web site.

In one way or another, the travel restrictions affect the great majority of Cuba’s population of 11.2 million people, especially due to what are considered discriminatory aspects of the requirement for a departure permit and a letter of invitation to travel abroad.

The letter of invitation is actually a condition set by destination countries, in order to grant entry visas. But in 2007, the Cuban authorities began to require that the letter be prepared at a Cuban consulate, before a notary.

When consulted by IPS, one Latin American diplomat who preferred to remain anonymous said the letter, signed before a notary, would continue to be necessary for applying for entry visas.

The travel reform has been expected since President Raúl Castro initially announced the plans in August 2011, after the legislative sessions. He said it would contribute to closer ties between this country and the community of Cubans living abroad, whose makeup he said was “radically different” from what it was in the first decades after the 1959 revolution.

As of January 2013, Cubans wishing to travel abroad on private affairs will only need a valid passport and an entry visa – when required by the destination country. In addition, the time they will be allowed to remain overseas will be expanded from 11 to 24 months, and they will be able to request an extension “for justified reasons.”

But the modifications include measures that continue to regulate the travel abroad of high performance athletes, government officials, administrative employees, university graduates, professionals and technicians “who are involved in activities vital to the country’s economic, social and scientific-technical development or hold positions with decision-making authority regarding financial and material resources.”

Granma stated in its editorial that in these cases, Cuba is forced to take measures to defend itself from U.S. policies that foment the “theft of talents,” which it said were aimed at depriving this country of human resources that are indispensable for economic, social and scientific development.

Immigration authorities told foreign correspondents that professionals considered necessary and essential to the country would continue to need authorisation to travel abroad for personal reasons. However, they did not specify how many people fell into that category.

At the same time, the government revoked a law that entitled the state to confiscate the assets of those who permanently leave the country – although this legislation had already been overruled in 2011 when the buying and selling of homes and cars was authorised.

According to Granma, “In due course, other measures related to the migratory issue will be adopted that will certainly help in the consolidation of the efforts being made by the Revolution towards the full normalisation of Cuba’s relations with its emigrants.”

Experts on migration affairs, like Antonio Aja, estimate that one out of three or four Cubans currently have family members living overseas. According to the 2010 U.S. census, there are 1.8 million Cubans in that country.

According to Aja, professionals represent 12 percent of all Cubans who have gone abroad to live in the last five years, “which makes Cuba part of the migration currents of theft and loss of important human capital.”

He said that while labour power is exported, the potential benefits of that process are not taken advantage of by Cuba.