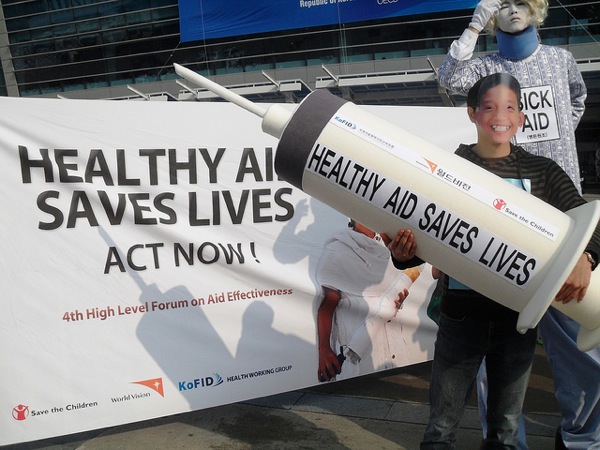 Large rich nations are falling short in their commitments to global aid and its effectiveness. Credit: Miriam Gathigah/IPS

WASHINGTON, Oct 16 2012 (IPS) - The United States is lagging far behind other developed countries in its policies aimed at improving global prosperity, according to new research.

The tenth annual Commitment to Development Index (CDI) was released this week by the Washington-based think tank Centre for Global Development (CGD). The report ranked the efforts of 27 developed countries to support developing countries.

As in previous years, Denmark, Sweden, Norway and the Netherlands vied for the top spots. This year the United Kingdom, in ninth place, was the sole country from the wealthy Group of Seven (G7) bloc to make the top 10, while the United States ranked nineteenth.

Unlike most rankings of its kind, the CDI does not focus primarily on the quantity of foreign aid each country gives per year. Rather, it takes into account seven different components of development and averages a country’s score in each area. It also focuses on the scope of the integration of a country’s policies.

“All nations are linked in many ways, not just through aid – many policies in wealthy nations affect people all around the world,” David Roodman, a senior fellow at CGD and the chief architect of the CDI, explained in an interview last week.

Comprising each of the index’s seven components, such as quantity and quality of foreign aid, or migration and environmental policies, are multiple factors that contribute to a country’s overall score. In the category of foreign aid, for example, the index looks at what percentage of a country’s gross domestic product is given away, and whether the money is “tied” to certain conditions, goes to corrupt governments, or is given in the form of loans.

The United States scores above average on only two of the seven components, and with a score of 4.8 it ranks behind all major industrialised nations except Italy and Japan. Meanwhile, Nordic countries repeatedly stand at the top of the list, for several reasons.

“Superficially it’s about foreign aid; each of these countries gives a large amount of foreign aid for the size of their economy, about 1 percent of GDP,” Roodman said of the Nordic countries. “They are also pretty good with environmental policy, doing more than most countries to reduce the use of fossil fuels.”

Citizens of these countries, Roodman explained, tend to trust more in their government and in how taxes are spent, a sentiment that could potentially allow government officials to feel more comfortable making significant commitments to developing countries.

Owen Barder, a senior fellow at CGD and director for Europe, offered a broader explanation for Nordic countries’ top rankings. In an interview last week, Barder said, “These smaller nations are forced to have an international outlook because of their size. I think this results in a sense of national pride in the role these countries play in international peace and environment negotiations.”

Barder regarded the CDI as an opportunity to evaluate how Europe as a whole scored in individual components and to begin a continent-wide conversation on how improvements can be made.

Not all countries look favourably on the CDI’s metrics. Japan, which is consistently ranked at or near the index’s bottom, responded to the 2006 CDI by criticising its method.

“By using its own method to measure aid effectiveness of each donor and publishing its results…the [CDI] has various problems and has not evaluated fairly developed countries’ policies for international development,” Japan’s ministry of foreign affairs wrote.

Japan received a low score in trade partly because of its high import barriers, especially on rice. Yet the Japanese government has argued that only the negative impact of its trade tariffs were considered, not the positive agricultural subsidies it also provides.

“The CDI does not reflect the fact that major developed countries…take development challenges by making maximum use of their comparative advantages and by complementing one another through aid coordination,” the ministry stated. (Roodman’s response can be found here).

Indeed, the CDI does have some structural flaws. The countries currently listed on the index are all democracies, for instance. These countries “preach concern for human life and dignity within their own borders”, the index’s overseers have written, noting that the CDI “looks at whether rich countries’ actions match their words”.

Yet in the past decade a host of “middle income” countries – China, India, Brazil – have emerged as global economic leaders.

“I don’t think changes in the world mean that Japan or the U.S. are any less obliged to contribute to the prosperity of developing countries,” Roodman said. He added that he is considering broadening the index to a group of countries similar to the Group of 20 (G20) to include rich developing countries that still have a large amount of poverty within their borders.

Incorporating such countries would require the index to be built on a paradigm different from its current “rich world, poor world” model.

The CDI has seen slight improvements in industrialised countries over the past ten years. Nevertheless, as Roodman pointed out, “The richest largest nations are still falling short of their potential.”