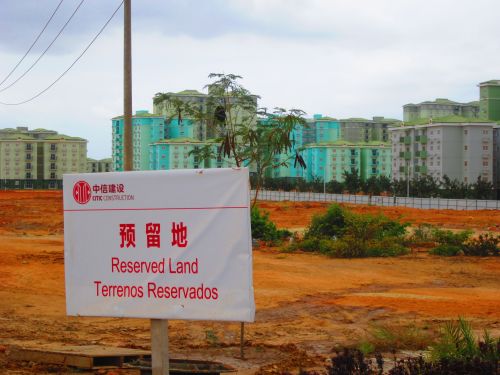 LUANDA, Nov 27 2012 (IPS) - “In Luanda there are no matches.” This was the first line of a report written by Nobel Literature laureate Gabriel García Márquez in the Angolan capital in 1977.

Soap, milk, salt and aspirin were other products that were hard to come by in a city that, he wrote, “surprised” visitors with “its modern, shining beauty,” although it was actually “a dazzling empty shell.”

The emphasis that the Colombian writer put on the shortages suffered by the war-torn country injured the pride of the Angolans who read his report. But he effectively described the chaos inherited from Portuguese colonialism and the war of independence, a year and a half after Angola became independent.

Today, 35 years later, it is the excesses and glaring contrasts that shock the visitor to this city in southwestern Africa. Shiny new cars on brand-new roads and highways lined by thousands of still-empty or half-built office buildings, apartment blocks and residential towers stand in sharp contrast to the sprawling slums around the city.

Signs on construction sites written in Chinese clearly reflect the Asian giant’s high level of participation in the construction of today’s new Angola.

The most ambitious project carried out by companies from China is the Nova Cidade de Kilamba (Kilamba New City), a huge development designed to house half a million people, 20 km south of downtown Luanda.

When it is completed, the new neighbourhood will have more than 80,000 apartments built for large families – the norm in Angola – in buildings five to 13 storeys high. The development is also to be fitted out with dozens of schools, child care centres, health clinics and shops.

Nearly one-quarter of the buildings have been completed. But almost all of them are empty, even though more than 3,000 apartments were already available when the development was inaugurated in July 2011.

Also involved in building the new city are Brazilian firms, especially construction giant Odebrecht, which is in charge of key projects like electricity and water grids and the construction of roads.

The foreign presence in the massive new developments “is not something to be admired, because it shows that there are no national companies with the capacity to build them,” said one of Angola’s most prominent writers, Artur Pestana, better known as Pepetela, who is also a professor of sociology.

“The Chinese build faster, they work round-the-clock shifts, and they offer almost interest-free long-term loans,” he said. But they employ few Angolan workers and “there are many complaints about the quality of their construction work,” he added.

Meanwhile, Brazilian companies “apparently learned their lesson from a few initial fiascos which made them the butt of national jokes, and they now stand out for the quality of their work,” which enables them to compete with the Chinese, said the author, who has published many historical novels that are critical of the government of José Eduardo dos Santos, president since 1979.

Odebrecht, a Brazilian consortium that operates in 35 countries, became a leader in infrastructure works in Angola after 1984, when it signed a contract for the construction of the Capanda hydroelectric dam on the Kwanza river, 360 km from the capital, built to supply Luanda.

The civil war, which broke out after independence, led to lengthy delays in construction of the dam, which did not begin to generate electricity until 2004.

The end of the armed conflict in 2002 unleashed a wave of investment in the reconstruction and modernisation of Angola, fuelled by the country’s oil revenue and Chinese credit.

Besides the construction of other large hydropower dams, Odebrecht is involved in the production of sugar, ethanol and electricity from sugarcane, and is expanding the waterworks and sanitation in Luanda, while building condominiums, roads and highways.

It is also dedicated to diamond mining, and controls the chain of 29 Nosso Super supermarkets.

It was the first non-oil company from Brazil to begin to operate in Angola with a “long-term outlook,” said Victor Fontes, director general of the Angolan company Elektra, which specialises in power and water grids. He said this had the positive effect of attracting other firms also interested in the long haul, instead of just short-term opportunities.

The director of institutional relations at Odebrecht Angola, Alexandre Assaf, told IPS that the consortium is committed to “continuity” in Angola, above and beyond the effects of wars or the global economic crisis.

Five years ago, only nine percent of the “strategic posts” in the company were held by Angolans – a proportion that has risen to 41 percent, he noted, to illustrate the company’s commitment to local development.

In that group, Assaf included not only directors and managers, but also young university graduates who have been hired by the company to be trained as future leaders.

But Elektra’s Fontes argued that Odebrecht’s “near-monopoly position in some sectors hinders local initiative” by standing in the way of the development of small and medium-sized local firms that could work on smaller-scale projects, such as the upgrading of streets and neighbourhoods, that do not require the involvement of transnational corporations.

In addition, the country pays “more than what is reasonable for certain infrastructure works and services” carried out by the Brazilian company, which are of high quality but are also costly, said Fontes.

He acknowledged, however, that Odebrecht “has brought good management and performance strategies, and the best in the construction industry in the area of workplace safety,” for example.

The challenge faced by foreign and Angolan companies is addressing the serious problems that have accumulated in Luanda, where the population has grown exponentially.

In 1970, Luanda was home to just over 475,000 people, according to the last census carried out by the Portuguese colonial government. Today, the population of the city is over seven million.

But the condominiums and residential towers mushrooming around the city have not curbed the housing shortage, because those in need of homes cannot afford to purchase or rent the new units, which were built for a middle class that is still small. And despite the large number of empty housing units, the prices have not gone down.

A lack of piped water and electricity services are also common complaints in the midst of the construction fever.

The solution is on its way, according to government plans, whose strategic projects are being carried out by Odebrecht. But it will take years to silence the back-up generators heard all around the city during the frequent blackouts, and to ensure a steady supply of piped water.