CAPE TOWN, South Africa, Apr 3 2012 (IPS) - Angola is celebrating 10 years of peace on Apr. 4. Since the end of its 27-year- long civil war in 2002, the country’s economy has prospered thanks to oil. But experts fear that parliamentary elections later this year could return the country to violence and instability. 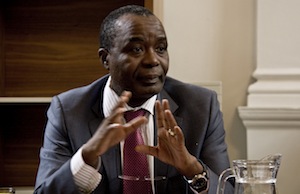 Only a small elite has benefited from the southern African country’s economic boom, while most Angolans continue to live in acute poverty.

“There has been economic growth, but in terms of democracy, human rights and social development, the country has gone backwards,” said Elias Isaac, Angola country director at the Open Society Initiative for Southern Africa (OSISA), at a media briefing in Cape Town on the eve of the peace anniversary.

Over the past decade, Angola has been one of Africa’s fastest-growing economies – its GDP is forecast to increase by an impressive 12 percent this year, according to the World Bank. That is mainly due to major export earnings from oil, since Angola has become Africa’s number two oil producer after Nigeria.

But only a tiny portion of these earnings has trickled down to the population. An estimated two-thirds of Angola’s 16.5 million people live on less than two dollars per day, according to the United Nations. The country was ranked 148 out of 187 on the 2011 U.N. human development index.

A recent boost in infrastructure development including roads, airports, schools and hospitals, as well as the promised construction of a million homes, are termed “window dressing” by the opposition, meant to distract from widespread self-enrichment of a small, opulent elite.

“Corruption, nepotism and disrespect of the law are Angola’s main problems,” admitted Marcolino Moco, a former prime minister and one of the few critical voices within the People’s Movement for the Liberation of Angola or MPLA, which has ruled Angola since 1975. “There is no consultation, but impunity and absolute power.”

A telling case in point is a whopping 32 billion dollar discrepancy in Angola’s treasury that the government cannot account for. U.S.-based financial watchdog Revenue Watch Institute (RWI) demanded this week that the International Monetary Fund (IMF) withhold a scheduled 130 million dollar loan disbursement until Angolan authorities fully and publicly justify how those billions have been spent.

“The IMF should insist that the government account for those funds before disbursing another 130 million dollars,” said RWI president Karin Lissakers, adding that Angola’s government urgently needed to combat corruption and mismanagement.

“There is total lack of accountability,” agreed Horácio Junjuvili, a member of the country’s main opposition party, National Union for the Total Independence of Angola. “The president uses state funds as his private property,” he added, saying he believed that much of the 32 billion dollars had been transferred into private foreign bank accounts.

It is an open secret that President José Eduardo dos Santos’ daughter Isabel, who manages the family fortune, has made multi-million-dollar investments in Angola and Portugal in the past few years.

Angolans also feel let down by the international community, which they say is only interested in doing business with the southern African nation, but not in pressuring it to uphold good governance and human rights.

“Oil plays a major role in the country’s politics. International interests are driven by business, not by morals,” Isaac said.

Although the country is up for elections this year – parliamentary elections are expected to be scheduled for August or September – few believe they will bring change. “We doubt elections will be free and fair,” said Junjuvili.

With Dos Santos – Africa’s longest-serving ruler – at the helm since 1979, the country has become an autocracy, in which the ruling MPLA enjoys a parliamentary supra-majority with few constitutional checks and balances.

The president has already ignored a new electoral law, which stipulates that an independent judge needs to be made head of the country’s electoral commission, by re-appointing Susana Ingles, a lawyer close to the president. Opposition parties have appealed Ingles’ appointment and are currently awaiting a Supreme Court decision.

“It’s really a dictatorship. Almost all power is concentrated in the hands of one person, the president,” Isaac said. “If illegalities don’t stop, the opposition will mobilise nationwide and the country will descend into chaos.”

Despite these concerns, neither the European Union nor the Southern African Development Community has agreed to observe elections in Angola later this year.

Dos Santos is highly unlikely to make way for new leadership, if elections are held. The 69-year-old signalled in November his readiness to lead the party in a re-election bid, saying he was “always available”.

Angolans have started taking to the streets in the past three months, demanding not only economic and social rights but also democracy. “The risk of political instability is high,” warned Moco.

Authorities have reacted to anti-government protests with violent crackdowns. Since January, they have banned five anti-government rallies and arrested at least 46 protesters. Although freedom of speech is officially guaranteed, media freedom is non-existent, with almost every newspaper and radio and TV station owned by the presidential family.

“Demonstrators are being tortured,” said Moco. “The situation is very bad. Angola’s future is dark.”