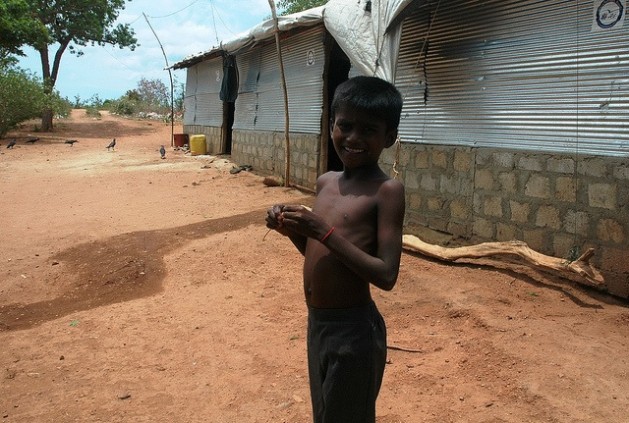 Children living on Sri Lanka's tea estates are among the country's most malnourished. Credit: Amantha Perera/IPS

BRUSSELS, Nov 26 2012 (IPS) - One hundred and ninety million – that’s more than the populations of Germany, France and Poland combined. It is also the number of children affected by vitamin A deficiency around the world.

An insufficient intake of this vital nutrient – found in foods like liver, carrots and kale – can be fatal and causes blindness in 250,000 to 500,000 children every year.

One hundred years after Polish scientist Casimir Funk formulated the concept of vitamins, substantial progress has been made in promoting awareness that proper nutrition is vital to health.

Yet much remains to be done, especially in the developing world, to spread awareness that simply solving the problem of hunger does not necessarily tackle the question of nutrition. Currently, 7.3 percent of the global health burden is caused by vitamin and nutrient deficiency.

Poverty is the leading cause of many vitamin deficiencies, especially vitamin A. Much of South Asia and sub-Saharan Africa is affected by severe cases of vitamin A deficiency – since many diets in this part of the world include only staples. For instance, rice can represent up to 70 percent of caloric intake in many Asian countries, while cassava – rich in calories but poor in nutrients – is the main food source for many Africans.

In contrast to other countries in South Asia, such as Bangladesh and Nepal, India has been slow to tackle vitamin A deficiency. As a result, India represents 37 percent of victims, including roughly 80 million children.

Dr. Klaus Kraemer of Sight and Life, a Swiss nutrition advocacy group, laments this lack of focus. “The World Health Organisation recommends two to three doses of vitamin A per year for children under the age of five years. This is based on scientific evidence indicating a mortality reduction of 24 percent.

“It is tragic that India is lagging behind in implementing this guideline, resulting in needless child deaths,” he said.

Dr. Shilpa Vinod Bhatte, a medical professional based in Mumbai, told IPS that the Indian problem is partly due to local diets: “Hidden hunger and vitamin A deficiency in India is not just due to poverty but a lack of knowledge about the nutritive value of foods that need to be consumed to maintain good health – most diets of children under-five only consist of corn or rice or wheat porridge.”

Still, there are signs that the trend is changing, largely due to a renewed push by development practitioners around the world to tackle the problem.

The Copenhagen Consensus 2012 Expert Panel of top global economists assessed the most effective ways of allocating funds to address the world’s toughest challenges, and reported that “bundled micronutrient interventions” should be the top priority for investments in global health and development.

One of the participants, Nobel laureate economist Vernon Smith, explained, “One of the most compelling investments is to get nutrients to the world’s undernourished. The benefits from doing so – in terms of increased health, schooling, and productivity – are tremendous.”

Indeed, the estimate put forward by the Copenhagen Consensus is a 17-fold return on every dollar spent.

Experts argue these benefits should be seen in the light of the Millennium Development Goals (MDGs), targets agreed upon by all U.N. member states in 2000 to tackle extreme poverty and improve lives.

The most recent U.N. scorecard showed that hunger and malnutrition rates are still abysmally high.

In particular, sub-Saharan Africa is experiencing very high levels of hunger – in Burundi, the Democratic Republic of Congo and Eritrea, over 60 percent of the population was listed as “undernourished”.

The U.N. and national governments provide vitamin A capsules equivalent to the needs of 390 million of the 540 million children with deficiencies, but a lack of coordinated action has left millions outside the scope of these efforts.

Now, the private sector has stepped in to fill the breach, providing supplements and helping to build capacity.

DSM – a global leader in vitamins, with headquarters in the Netherlands – has teamed up with organisations such as the World Food Programme (WFP), the World Bank, and the Global Alliance for Improved Nutrition (GAIN), as well as charities like Vitamin Angels, to provide vital vitamins and nutrients to poor communities. 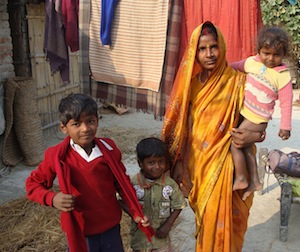 Renu Devi, of Bagwanpur Rati village in India’s Bihar state, with her children who take the Vitamin A doses. Credit: Sujoy Dhar/IPS

“Vitamin Angels supports more than 100 NGOs in high-risk Indian states who help us reach close to three million children under five years at risk of going blind or dying due to vitamin A deficiency,” explained Bhatte.

Vitamin Angels, alongside Sight and Life and DSM, also works in communities across India to engage stakeholders on the ground, from NGOs and local governments to community leaders, to formulate long-term goals such as working through local institutions to set up a sustainable vitamin A distribution system.

Already, there are tangible results. Private contributions could push the number of children with access to Vitamin A capsules to 50 million by the close of 2013. These joint efforts are currently meeting approximately 17 percent of the unmet global demand.

Private sector efforts have nudged the European Union and its member states to spotlight the problem as a crucial development issue. At a recent conference on development, the European Commission’s Francesca Mosca explained, “It is unbearable that so many children are dying from malnutrition. The time to act is yesterday, not tomorrow.”

Mosca rightly pointed out that some efforts have started to bear fruit, based on a successful public-private partnership model. “We have been extremely involved in the Scaling Up Nutrition (SUN) movement”, a country-led initiative launched in 2010 to increase the efficacy of existing programmes. “I think it was the first time that all the actors came together: private sector, public sector, donors and partner countries.”

Paulus Verschuren, the Dutch Government’s Special Envoy on food and nutrition security for development, speaking at the same event, stressed, “The (period) of a child’s life during which we can intervene is very short. Children’s futures depend on nutrition… it’s really a moment that we can’t afford to miss.”

Nutrition plays a role in achieving almost every MDG – its impact on child health, for instance, could also boost the number of children attending school, promote gender equality by empowering women to take a more active role in their children’s health, and also improve maternal health, thereby reducing the maternal mortality ratio.