VAISHALI, India, Dec 29 2010 (IPS) - With three small children to raise in a dirt-poor village in eastern India’s Bihar state, farm labourer Renu Devi is an unsung rural supermom who shuttles between home and field every day. 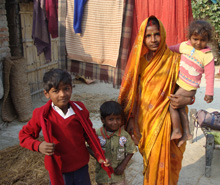 Renu Devi of Bagwanpur Rati village in India's Bihar state with her children who take the Vitamin A doses. Credit: Sujoy Dhar/IPS

But the demure 30-year-old mother does not forget to bring her children to the biannual Vitamin A rounds in Bagwanpur Rati, one of the villages in Vaishali district of Bihar. This is because Vitamin A deficiency is a major cause of malnourishment in children. And in India’s rural heartlands, pro-active state governments like the one in Bihar have been teaming up with the United Nations Children’s Fund (UNICEF) to reach out to the nine to 59-month-old children with Vitamin A doses twice every year.

The rounds, given during the routine immunisation, precede an earnest campaign for awareness and information using the rural public announcement systems, which include men going around beating drums and hollering the dates for the rounds.

India’s national policy recommends that all nine to 59- month olds be given Vitamin A Supplementation (VAS) twice yearly to reduce the risk of blindness, infection, under- nutrition and death associated with such deficiency.

“I take my children because it is good for their eyesight,” mutters an almost unlettered Renu Devi, clutching her three children together as she reaches her thatched house from the field to take care of the family.

In India, a country of 1.2 billion people, nearly 62 percent of pre-school children are deficient in Vitamin A, according to latest estimates, says UNICEF. There is a high prevalence of wasting (20 percent), stunting (48 percent) and anaemia (70 percent) among children below five years owing to nutritional deprivation.

In Bihar, Vitamin A deficiency amongst pre-school children has long been a public health problem. But since 2005, UNICEF has been working with the Bihar government to strengthen the Child Development and Nutrition Programme’s outreach and get to children who would otherwise be left out.

In Bihar, the success of the drive has been achieved by adapting an outreach strategy to include beneficiaries that are nutritionally, economically and socially vulnerable. Vitamin A Supplementation (VAS) to cover children from socially excluded areas through special strategies is designed for this purpose, UNICEF officials say.

According to Dr Vandana Joshi, UNICEF nutrition specialist in Patna, the specialty of the Bihar campaign is the creation of additional sites for the rounds to reach uncovered areas and ensure vitamin supplementation to children from excluded areas.

“Additional sites were created to significantly increase outreach to children, which is reflected in the fact that each additional site, on an average, gave Vitamin A dose to approximately 115 children during the round which were otherwise missed,” says Joshi.

Once known for lawlessness and crushing rural poverty, Bihar – now under the aegis of chief minister Nitish Kumar who was returned to power in 2010 for a second five-year term – is witnessing more growth and development.

The outcome is visible in the villages of Vaishali, a district contiguous to state capital Patna but with pockets of poverty despite the overall resurgence in the otherwise backward state.

Elderly village woman Shanti Devi says she does not care to know the exact benefits of Vitamin A. But since it is good for the children, she will take her six-month-old grandchild for the doses when he reaches nine months. “My grandchild is now only six months old. So we have to wait for three more months, but surely I will get him the doses,” says Shanti Devi.

Vitamin A is an important micronutrient for maintaining normal growth, and is essential for a well-functioning immune system and visual and reproductive functions.

“The Bihar programme is special for several reasons,” explains Joshi. “The additional site approach apart, the campaign and distribution is powered by the use of 80,000 Anganwadis (government-sponsored child and mother care centres of India), and accredited social health activists.” “Our efforts are to create new additional sites as per local conditions and reach more to the backward caste and tribal habitations (known as the Schedule Caste and Scheduled Tribes),” she says.

Joshi’s words find meaning in the villages of Vaishali district.

In Bhagwanpur Rati village, Priya Devi is an Anganwadi worker whose easy access to every household helps her spread the word about the Vitamin A rounds.

“We undergo training and then fan out to survey the 9- month to 59-month-old children,” says Priya Devi. “We educate the mothers, tell them what to feed their babies to provide nutrition and also ask them to come to the centres for check ups.”

The Anganwadi workers in Bihar are supported by a strong contingent of trained nurses and midwives.

At Mansurpur health sub-centre in Vaishali district, nurse Amita Kumari says, “We remove misconceptions among the villagers about the doses and they have all wholeheartedly accepted us.”

The latest coverage data indicate that in the first semester of 2009, VAS in Bihar reached 13.4 million nine to 59-month-olds, or 95 percent of children in this age group.

As Mukesh Kumar, district anaemia extender of UNICEF in Vaishali, points out: “The Vitamin A campaign has really caught on in Bihar with the villagers recognising it as the chhamachwali dawa (the medicine in spoon) and accepting it without any inhibition.”