Elected a President, Got a Dictator 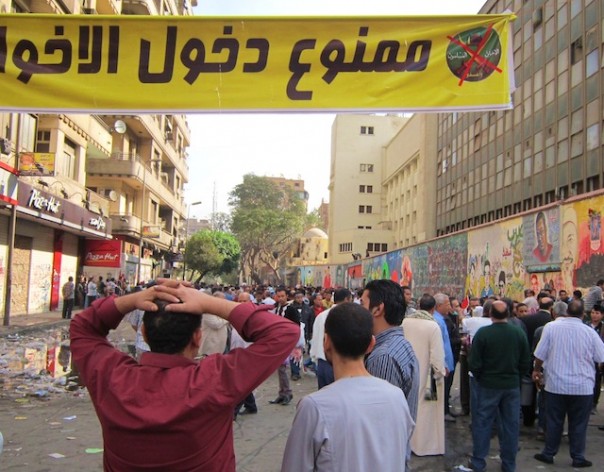 Protesters gather near Tahrir Square beneath a banner that reads "No entry to the Muslim Brotherhood". Credit: Cam McGrath/IPS.

By dusk, the iconic square had filled with demonstrators. But the protest marches from different neighbourhoods kept coming late into the night, backing up far beyond the square’s perimeter.

Commentators drew comparisons to the mass demonstrations that marked the start of the 18-day uprising that toppled the authoritarian president Hosni Mubarak. But judging by the scale of the turnout, the scene more closely reflected the dictator’s final days.

“The people want to topple the regime,” the crowd chanted, echoing the flagship slogan of the revolution that toppled Mubarak.

Anger against Morsi, a former leader of the Muslim Brotherhood, has been welling since he issued a decree last week granting himself broad new powers. The democratically elected president had already extended his power in August with a decree that sent the military back to its barracks and left him with sole executive and legislative authority. His new declaration carves out judicial powers as well.

The edicts appear to wrap revolutionary demands, such as retrials of police and Mubarak regime officials implicated in the killing of protesters in last year’s uprising, around ominous portents of authoritarian rule. Most significantly, Morsi assumes the authority to take “any measures he sees fit” to protect the revolution, national unity or national security. His blanket clause is backed by a decree that his decisions cannot be appealed or revoked by any authority.

“I’m here tonight to say no to dictatorial rule,” says Hamdi Hassan, who travelled from the Nile delta city of Zagazig to join the protests in Tahrir Square.

The president’s power grab, ostensibly made to cut through the legal deadlock that has stalled Egypt’s democratic transition, has polarised the country dangerously. Clashes have broken out in cities across Egypt, pitting Morsi’s predominantly Islamist supporters against a broad spectrum of mainly liberal and secular political forces. Several people have been killed in the violence, and hundreds injured.

Analysts say Morsi appears to have overestimated his support. But the president has showed no sign of backing down – which threatens to lead the country deeper into turmoil.

His supporters have argued that figures from the old regime and a politicised judiciary are obstructing the path to democracy and can only be purged by extra-legal measures. They remain confident that the Islamist president will use his near-absolute powers wisely and benignly to shepherd the country through the tortuous transition, relinquishing them once a parliament and constitution are in place.

“The presidency reiterates the temporary nature of the said measures, which are not meant to concentrate power but…to devolve it to a democratically elected parliament…as well as preserving the impartiality of the judiciary and to avoid politicising it,” a statement from the president’s office said.

But many of Morsi’s opponents suspect his allegiance to the Muslim Brotherhood, of which he was a long-term member, trumps any interest in following the rules of liberal democracy. They argue that the Brotherhood has used every opportunity to aggregate political power and monopolise state institutions, and cannot be trusted.

Youth movements that led the 2011 uprising against Mubarak regard the Muslim Brotherhood with suspicion as the group was late in joining the revolution, yet appears to have hijacked it to consolidate its power base and the political agenda.

A principal fear is that Morsi’s decree, which shields the Islamist-dominated constituent assembly from dissolution, could hand the 84-year-old Islamic group the ultimate prize: a chance to draft a constitution largely of their own design.

Morsi has attempted to portray his administration as inclusive and transparent. But reports that he failed to consult his appointed advisers before issuing his latest shock decree, as well as other important policy issues, have raised concerns about his governance.

Even the president’s justice minister appeared to have been caught off guard – all the more surprising given the declaration’s enormous implications on the judiciary.

A fundamental problem, suggests one analyst, is that Morsi and the Brotherhood view political life and democratic politics through a majoritarian lens. Writing in Foreign Policy’s online edition, Michael Wahid Hanna says the president has repeatedly issued edicts with little or no discernible consultation, and either unaware or wholly dismissive of the opposition they might engender.

“Morsi’s majoritarian mindset is not anti-democratic per se, but depends upon a distinctive conception of winner-takes-all politics and the denigration of political opposition. Winning elections, by this perspective, entitles the victors to govern unchecked by the concerns of the losers,” he writes.

Protester Wael Darwish says this is “an absurd way of thinking” for a president elected into office on a razor-thin margin.

Less than 25 percent of Egyptians voted for Morsi in the first round of the presidential election. The Brotherhood candidate is widely believed to have won the run-off with 51.7 percent of votes because many Egyptians preferred to elect him than face the prospect of Ahmed Shafik, Mubarak’s last prime minister and longtime confidant, becoming head of state.

“I voted for Morsi,” Darwish admits. “Maybe he’s still better than Shafik, but we elected a president, not a dictator.” (END)