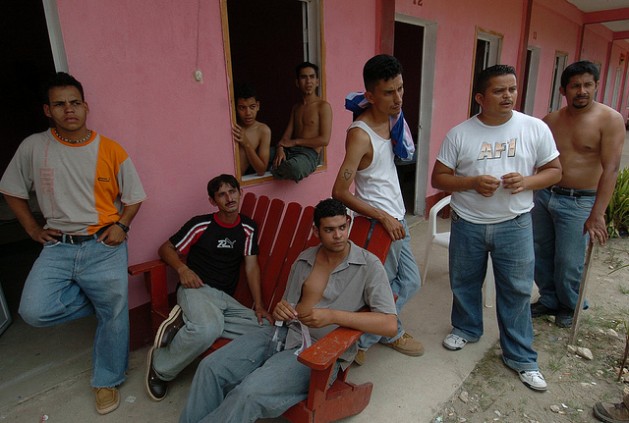 Migrants waiting in El Naranjo, Guatemala for the 'coyote' who will smuggle them into Mexico. Credit: Wilfredo Díaz/IPS

WASHINGTON, Nov 20 2012 (IPS) - Despite recession in Europe and a weak recovery in the United States, remittances to developing countries have been growing at a strong pace over the last year and are likely to accelerate further through 2015, according to a new report released here Tuesday by the World Bank.

Because those statistics reflect funds that move only through formal or official channels, the actual amount of money migrants send to their families back home may be considerably more. Some experts say total remittances to developing countries could total as much as twice the official figure.

By 2015, according to the 12-page briefing, official remittances to developing countries should reach as much as 534 billion dollars. That would be roughly equivalent to four times the amount of official development assistance (ODA) provided by wealthy countries to poor nations last year.

According to the report, remittances to the developing world have proved remarkably durable despite the 2008 financial crisis which produced a slight dip in remittances in 2009, the first since serious efforts were first made to track remittances in 1990. Since 2009, however, remittances have bounced back strongly.

“Although migrant workers are, to a large extent, adversely affected by the slow growth in the global economy, remittance volumes have remained remarkably resilient, providing a lifeline to not only poor families, but a steady and reliable source of foreign currency in many poor remittances recipient countries,” said Hans Timmer, director of the Bank’s Development Prospects Group.

“What came as a surprise both to governments and experts in the field was how little the dip caused by the economic recession affected remittances compared to other financial flows, such as ODA,” Jeanne Batalova, a senior policy analyst at the Washington-based Migration Policy Institute (MPI), told IPS.

The strongest growth over the last couple of years, according to the report, was found in South Asia, the Middle East and North Africa, largely due to the economic dynamism in the Gulf Cooperation Council (GCC) nations.

Similarly, countries in the former Soviet Union have benefited from Russia’s oil boom. Remittances to Armenia, Georgia, Kyrgyzstan, Moldova, and Tajikistan are all estimated to have grown this year.

Indeed, as a percentage of gross domestic product (GDP), remittances to Tajikistan (47 percent) was the world’s highest in 2011, while Kyrgyzstan ranked third. Remittances to that Central Asian country made up 29 percent of its GDP last year.

By contrast, countries that have relied more heavily on remittances from migrants in western Europe – notably, Eastern Europe, some Central Asian and Muslim countries, and Africa – have not done nearly as well due to the continuing recession and unemployment problems in the European Union, as well as the related growth in anti-immigrant sentiment and Islamophobia there.

“Political and other conditions affect how much immigrants can send,” according to Batalova. “When anti-immigrant feeling spreads out, especially in European countries, it might make it more difficult for immigrants to find jobs that would allow them to send more home. They may be less likely to come or stay.”

While economic recovery in the United States has been weaker than hoped, remittances to Latin America and the Caribbean have kept pace, although remittances to Mexico have been no greater this year than in 2011, possibly due to tighter border controls and fewer construction jobs, as well as changes in the peso/dollar exchange rate.

So far this year, China ranked just behind India as the largest recipient of remittances (66 billion dollars). It was followed by the Philippines and Mexico (24 billion dollars each), and Nigeria (21 billion dollars), Africa’s most populous nation.

The cost of sending remittances also affects flows. In a bid to boost remittances, the Group of 8 countries in 2008 and the Group of 20 nations three years later committed themselves reduce the global average remittance cost by five percentage points in five years. In fact, remittance costs for the 20 largest bilateral remittance sources have declined only slightly over the last four years – from 8.6 percent in 2008 to about 7.5 percent this year, according to the report.

It’s cheapest to send remittances from Russia – where the average cost comes to only two percent of transfers – while costs in Saudi Arabia, the United Arab Emirates, Malaysia, Qatar, and the U.S. range from four to six percent. The most expensive is Japan at 17 percent, although Germany, France, and Australia all exceeded 10 percent, according to the report.

Another factor is the perception of need back home. “In Egypt or other Arab countries that experience political unrest, the family members who live abroad are more likely to step up and send remittances because the need is even greater than during just the good times,” according to Batalova.

“It was similar with Haiti after the (2010) earthquake when many Haitian immigrants in the U.S. were not in a strong economic position at all. Yet, despite the (effects of the financial) crisis, they were sending remittances back home at a higher rate,” she said.

Over the next three years, remittances to developing countries in Eastern Europe and Central Asia are expected to grow most rapidly, followed by East Asia and the Pacific, and Latin America and the Caribbean. In South Asia, the rate of growth is expected to slacken next year before recovering, while sub-Saharan Africa will trail. The slowest-growing region is expected to be the Middle East and North Africa.