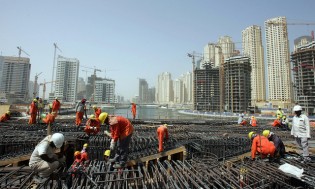 By Baher Kamal
Here goes another fact: 230 million migrant workers are now a major life-saving source for up to one billion people starving in the world’s poorest communities, as well as a vital lifeline for the economy of their countries of origin.

Migrant Workers’ Remittances Fund Development-Make It Easier for Them: Podcast

By Marty Logan
I hope you had a chance to listen to our last episode, Environmental disasters creating more migrants within countries. We talked about the rising number of people who are forced out of their homes because of climate or environmental disasters. Nearly 30 million men, women and children in 149 countries were displaced in 2020, temporarily or for good and the signs are, that those numbers will only grow.

By Baher Kamal
Straight to the point: while right and far-right politicians keep marketing their image with intensive campaigns of hatred, discrimination and stigmatisation against migrants, 200 million migrant workers worldwide will sacrifice over half a trillion dollars from their hard-earned money, to rescue 800 million members of their impoverished families. And that’s only this year 2019.

By Katelyn Fossett
Ahead of President Barack Obama’s trip to Mexico and Costa Rica, experts here are expecting that security will take a back seat to issues of economic cooperation between the U.S. and Mexico.
Next Page »
ADVERTISEMENT ADVERTISEMENT