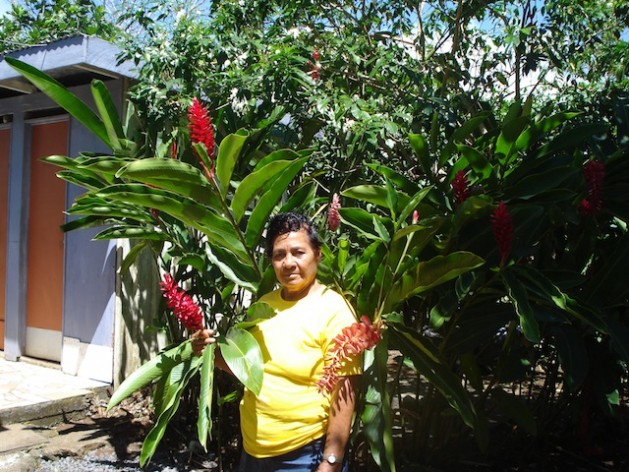 APIA, Sep 29 2014 (IPS) - The small South Pacific island state of Samoa, located northeast of Fiji, attracts tourists with its beaches, natural beauty and relaxed pace of life, but similar to other small nations with constrained economies, it is experiencing an exodus of young people, who are unable to find jobs.

Samoa has a net migration rate of -13.4, while in neighbouring Tonga it is -15.4 and in the western Pacific island state of Micronesia it is -15.7, in contrast to the average in small island developing states (SIDS) of -1.4.

In Apia, Samoa’s capital, Siera Tifa Palemene, a fit, active woman in her late sixties, is one of many mothers to have watched her children migrate to larger economies in the region.

Palemene presides over an extensive family, with five sons and five daughters. Four of her married sons, now in their thirties, live in Australia and New Zealand, where they work in construction and building trades, such as welding.

“A lot of our people are migrating overseas to earn a living, leaving behind their parents, so there are elderly people now who have no-one living with them." -- Tala Mauala, secretary-general of the Samoa Red Cross Society
“The salaries are too low here in Samoa and my children have large families,” Palemene told IPS, emphasising that one of her sons has seven children. “My sons want their children to get a better life because over here there are not that many opportunities.”

Contraceptive prevalence in Samoa is an estimated 29 percent and the total fertility rate is 4.2, one of the highest in the region. However, while the country has a high natural population increase rate of two percent, emigration reduces population growth to 0.8 percent. Emigrants residing predominantly in Australia, New Zealand and the United States number an estimated 120,400, which nearly matches Samoa’s population of 190,372.

Twenty years after the International Conference on Population and Development (ICPD) held in Cairo in 1994, many small island states are still striving for sustainable economic development, equality and employment growth to match bulging youth populations.

Despite stable governance, Samoa’s economy, dependent on agriculture, tourism and international development assistance, suffers from geographic isolation from main markets. It was also impacted by the 2008 global financial crisis, an earthquake and tsunami in 2009 and Cyclone Evan in 2012, which damaged infrastructure and crops.

Livelihoods for most people centre on fishing, subsistence and smallholder agriculture, as well as small commercial and informal trading, with an estimated 27 percent of households striving to meet basic needs.

International migration, therefore, is an important avenue to economic fulfilment for young educated people with increased lifestyle aspirations and there are benefits for family members living in Samoa, such as remittances.

“My sons send money to help out the family; this helps pay all the household bills, such as electricity, and to send the grandchildren here to school,” Palemene said. According to the World Bank, remittances to Samoa in 2012 were an estimated 142 million dollars, or about 23 percent of gross domestic product (GDP).

As Palemene’s offspring face more expenses with their own families, remittances are becoming infrequent.

“I know they have their families to support and that life overseas is very expensive with so much to pay for, but when I need it, I call them and they give me money,” she said.

Still, Palemene, who receives a state pension of 135 tala (about 57 dollars) per month, works as a housekeeper at a guesthouse in Apia for extra income.

She supports the decision of her sons to emigrate and is keen for them to “have their own good future,” but added, “The only thing is that I worry that something might happen to them when they are so far away.”

Elderly relatives who remain in Samoa also face vulnerabilities when the social safety net traditionally provided by the younger generation in extended families is diminished.

“A lot of our people are migrating overseas to earn a living, leaving behind their parents, so there are elderly people now who have no-one living with them,” Tala Mauala, secretary-general of the Samoa Red Cross Society, observed. So, in times of natural disaster, for example, they need extra forms of community or state assistance.

There are other losses for high emigration countries such as the outward flow of educated professionals, known as the ‘brain drain’, due to the lure of higher salaries in the developed world, making it more difficult to progress much needed infrastructure and public service development. In Samoa the emigration rate of those with a tertiary education is 76.4 percent.

According to UNESCO, remittances are also primarily spent on consumption, rather than contributing to productivity, and the state’s trade deficit has grown as families in Samoa with additional disposable cash demand more imported goods.

Palemene sees her children when they pay her airfare to visit them or when they attend family events, such as weddings, in Samoa, but she doubts they will return to live permanently in the beautiful Polynesian country.