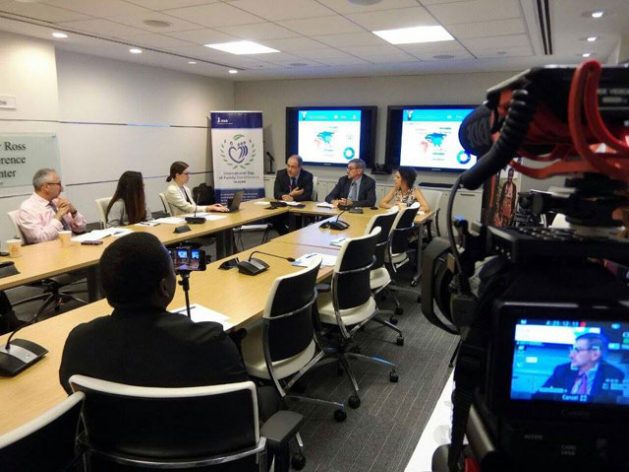 UNITED NATIONS, Jun 15 2017 (IPS) - A new report by the International Fund for Agricultural Development (IFAD) says the flow of money from migrants—commonly located in developed countries—to their families in lower income countries has doubled over the last decade.

Dubbed the remittance flow, it increased by 51 percent—from 296 billion dollars in 2007 to 445 billion in 2016—lifting families out of poverty across the world.

Migrants in the United States typically send the largest amount of money, making the U.S. the biggest benefactor, closely followed by Saudi Arabia and Russia, according to the report.

In fact, the top ten countries, largely in Europe and the Gulf Council, account for half of the annual flows.

The increase in flow of money brings good news. First, it increases the leverage of migrant workers all over the world. Second, it boosts sustainable development in countries which benefit from the money, notably China, India and the Philippines, which tops this list.

The money sent is used by families to achieve personal goals, such as improving healthcare, educa-tion and food security. This is why, despite the seemingly staggering numbers, Gilbert F. Houngbo, the President of IFAD, said “It is not about the money being sent home, it is about the impact on people’s lives.”

Still, even if the leading blocs account for half of the flow, they represent a tiny fraction of their country’s GDP.

Generally, 85 percent of a migrant’s income remains within the host country.

The value of the money sent back cannot be underestimated—most families rely on this income, which can make up to 60 percent of the household income in rural areas.

However, many criticize the high costs of transactions, especially in rural areas which receive the bulk of remittances. Speaking about the prospect of building better infrastructure to ensure easy and cheap flow of money, Pedro de Vasconcelos, the lead author of the report, told IPS that it was particularly im-portant in rural areas, “where remittances count the most, and where we can have them count more.” He added that “simply opening a saving account can transform the lives of people” and can go a long way towards eradicating poverty.

In the end, there is a lot of room for innovation and growth as the demand for migrant labour will continue to grow in developed countries.

To understand the scale of this flow, it is important to understand the number of people involved: one in every seven people in the world is directly impacted—either as a sender or a beneficiary. This means that a billion people in the world are involved in the transaction in some way. Even when times get tough, as during the financial crisis of 2008, remittance flows remained steady.

There are two overarching reasons that explain the growth of the flow, and why it’ll continue.

First, it reflects the demand for migrant labour as populations in high-income countries grow older with advances in medicine.

Second, migrant workers are committed to make ends meet for their families at home, and readily make sacrifices—such as eating fewer meals—to ensure money they can send home. This is why this corridor of money has been increasingly referred to as “Family Remittances.”

The flow of money has greatly exceeded migratory flow, which only grew by 28 percent over the last decade. This means that there are as many 800 million people across the world who are reliant on migrant workers, who are about 200 million in number.