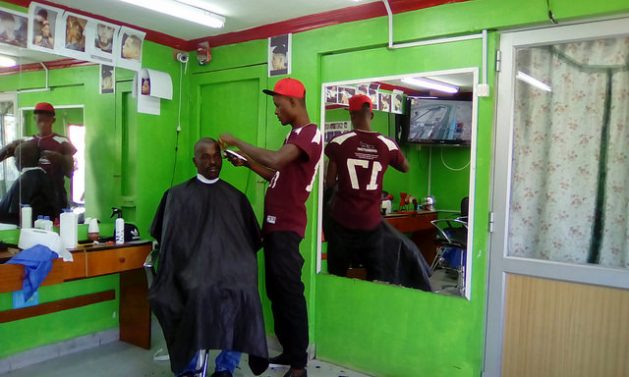 In the popular municipality of Estación Central, in Santiago de Chile, a Haitian hairdresser has established a barber shop where Creole is spoken and the nationals are served. At the end of this year, migrants will have sent 466 billion dollars to family and friends in their countries of origin. Credit: Orlando Milesi/IPS

BRUSSELS, Nov 30 2018 (IPS) - At the end of this year, migrants will have sent 466 billion dollars to family and friends in their countries of origin. Despite this record amount these remittances have little to no effect on the dire economic state of affairs in those home countries. Earlier this week in Brussels, a group of experts convened to think of ways to make the sent money work in a way that benefits more than just a few lucky families.

Though relatively stable as a percentage of the world population, there have never been more migrants than today. Out of the one billion people that moved away from their places of birth, some 258 million have found a place abroad while 760 million remained within their own states. Despite it being a heated political debate in the global North, only one third of all international migration is directed from South to North. The overall majority, some 100 million people, move between states in the global South.

These numbers were presented by Laura Palatini, Belgium and Luxemburg’s mission chief for the International Organisation for Migration (IOM). Palatini was the first of five speakers on an international conference, organised by IOM, the International Fund for Agricultural Development (IFAD), several Brussels municipalities and local and international NGOs at the Brussels Parliament this Tuesday.

These one billion migrants each year send home approximately 466 billion dollars. “It is said that if remittances would be country, it would have the right to claim its seat in the G20,” says Valéry Paternotte of Réseau Financité, a Belgian network of organisations for ethical finance, “It is three times the annual budget of development aid world-wide.”

But according to Paternotte, the numbers need a closer look. “In Belgium for instance, 38 percent of all remittances are destined to neighbour France and 4 percent for Luxembourg while Senegal, Congo, Rwanda and Bangladesh together account for less than one percent.” Then again, the estimate of 466 billion is most probably an underestimation, as not all countries are being taken into account, second and third generations are not included, nor are informal remittances – migrants travelling with envelopes, small transfer agencies and possible other unknown practices of sending money home.

Nevertheless the 6.4 billion flowing annually into Morocco is just as important for the economy as the entire phosphate sector or tourism. The nine billion dollars sent to Congo by members of the diaspora accounts for twice the country’s annual budget. Remittances are an indispensable source of income for 750 million people worldwide. Research in 71 developing countries indicates that a 10 percent rise in remittances leads to a 3.5 percent drop in the number of people living with less than one dollar a day.

Researchers on the topic agree that remittances are a stable source of income for developing countries that are not affected by economic shocks or cycles of regression and growth. Moreover, they are the first form of help that reaches regions affected by natural disasters or epidemics. This became most evident with the last ebola crisis in Sierra Leone and the recent earthquake in Nepal.

But as of yet, the money flow doesn’t lead to structural changes in the countries of origins whose economies remain in a dire state. “The first obstacle is that the money received is spent, not invested in the local economy,” says Paternotte, “and this is understandable. In the world’s least developed countries less than a quarter of adults have access to a bank account. The received money is kept under the mattress. That is a very practical but very important barrier to saving and investing in the local economy.”

Traditional banks seem not to be interested in putting up branches in developing areas, let alone rural zones in those developing areas, the expert explains. “Moreover, social projects – schools, hospitals, cooperative farms – aren’t invested in due to poor returns. That is a characteristic of the system and not very different in our own country,” the Belgian national says.

Besides that, lots of migrant communities lack financial literacy, which together with cultural factors leads to inefficiency. Pedro de Vasconcelos, manager of the Financing Facility for Remittances at IFAD in Rome, gives the example of a Filipino community in Italy.

“We found out that they couldn’t say no when someone called for money,” he says, “it’s in their culture. It was a revelation for many of them when we told them that you can refuse when there’s not a good reason. Then we began to save. Two hundred out of every thousand euros, which is a lot. With all these savings we started investing in rural areas around their home town which used to be an agricultural area but now had become an importer of food. From three farms for laying hens we quickly went to five. On Facebook, the diaspora followed everything that happened in the homeland.”

Several of the investors in Italy moved back after the project turned out a success. “Because they see that there are possibilities there. That work can be created. The Philippine government is now looking at how this project can be scaled, to achieve real economic growth through the Diaspora.”

De Vasconcelos’ example shows that remittances can play a role in reversing or even stemming migration. But according to agronomist Jean-Jacques Schul of the Belgian NGO, IDAY International, an important factor should not be overlooked: the involvement of the local government.

“Remittances carry a risk,” Schul says, “because thanks to the money from abroad, the government does not have to listen to its citizens. They can survive without the government’s support. And without a government that listens to its citizens, nobody sees a future in their own country. Which makes them leave. It is a vicious circle. ”

The solution? When it comes to any kind of transfers of funds to the South, civil society and the government must be encouraged to start a constructive dialogue.

“Provide a policy in which remittances, or at least a part of those, serve to start up projects together with the government. If development aid is made available, make sure that citizens’ movements can check where that money is going. That is hardly the case now. Only with collaboration between citizens’ movements and the government will sustainable change occur. Nobel Prize winners Amartya Sen and Angus Deaton have been proclaiming this for years, why don’t we listen?”