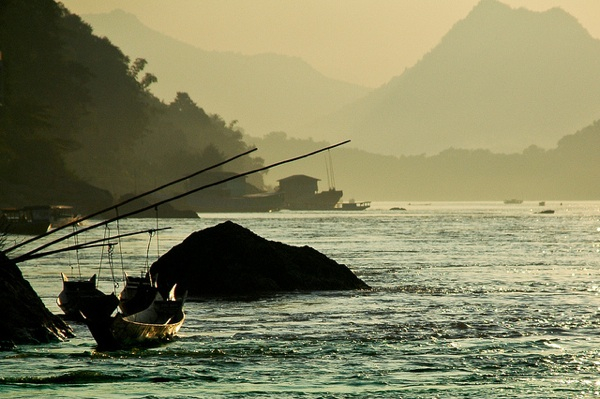 Fishermen's boats on the Mekong River in northern Laos, where the building of a controversial dam is planned. Credit: Irwin Loy/IPS

WASHINGTON, Nov 6 2012 (IPS) - The U.S. government is directly cautioning the Laotian government following Monday’s announcement that the latter will move forward with contentious construction plans for a massive hydroelectric dam on the Mekong River.

“The extent and severity of impacts from the Xayaburi dam on an ecosystem that provides food security and livelihoods for millions are still unknown,” warned the U.S. State Department on Tuesday. “We are concerned that construction is proceeding before impact studies have been completed.”

The 3.5-billion-dollar Xayaburi dam has long been opposed by environmentalists, downstream communities and legal scholars, while the World Bank recently announced sanctions against a Finnish company that approved a disputed environmental assessment in favour of the project.

A major 2011 report by the pan-regional Mekong River Commission expressed concern over several areas in need of further review, and the Laotian government has stated that it would proceed on the Xayaburi project only once those concerns were ameliorated.

However, at the current summit of the inter-regional Asia-Europe Meeting (ASEM) in the Laotian capital, Vientiane, the government made a surprise announcement that it would be moving forward immediately, with groundbreaking at the dam site slated for Wednesday.

“We would hope that senior government officials and heads of state at the Asia-Europe Meeting would express in the strongest possible terms their objections to the Lao government proceeding with the project,” Aviva Imhof, campaigns director with International Rivers, an environment watchdog, told IPS.

“In addition, we would hope that donors to Laos’s electricity and infrastructure sectors, such as the Asian Development Bank and the Japanese government, would reconsider their ongoing development assistance to a government that refuses to comply with its international obligations.”

Tuesday’s statement from the U.S. State Department was unusually direct, cautioning that the United States’ “own experience has made us acutely aware of the economic, social and environmental impacts that large infrastructure can have over the long-term”.

While the U.S. does not say that it opposes the project outright, the State Department highlights that the Mekong River Commission’s members, based in Vientiane, have yet to reach consensus on whether the project should continue. The government urged its Laotian counterpart to “uphold its pledge to work with its neighbours in addressing remaining questions regarding Xayaburi”.

The statement comes a year after a unanimous resolution was passed by the U.S. Senate Foreign Relations Committee “calling for the protection of the Mekong River Basin and for delaying mainstream dam construction along the river”.

First of a ‘cascade’

As currently planned, the Xayaburi project would consist of a 1,260 megawatt hydroelectric installation northwest of Vientiane. While there are already three operational dams (with two more under construction) on the narrow northern section of the Mekong that falls within China, the Xayaburi would be the first such project after the river enters the plains and becomes the wide, slow-moving waterway that is central to the lives of tens of millions of Southeast Asians.

Most likely, the dam’s construction would also ease the way for the dozen additional dams that the Mekong River Commission says are currently under consideration along the river.

Under regional agreements, none of these can go forward without consent from the rest of the affected countries. Yet despite a 2011 decision among those countries that additional work was necessary before the Xayaburi project should be allowed to proceed, the Laotian government has quietly continued to oversee extensive and expensive groundwork.

“Laos said it would cooperate with neighbouring countries, but this was never genuine,” Ame Trandem, Southeast Asia programme director for International Rivers, said Tuesday. “The international community should not let the Lao government get away with such a blatant violation of international law.”

Trandem is calling on Western donors as well as the governments of Thailand, Vietnam and Cambodia to take a “firm stand” against the recent decision.

“The Xayaburi Dam is the first of a cascade of devastating mainstream dams that will severely undermine the region’s development efforts,” she said.

“The food security and jobs of millions of people in the region are now on the line. None of Vietnam and Cambodia’s environmental and social concerns have been taken seriously. Laos has never even collected basic information about the ways that people depend on the river, so how can it say that there will be no impacts?”

Speaking with journalists on Monday, Viraphonh Viravong, the Laotian deputy minister of energy and mining, brushed aside such criticism, saying simply that his government had “addressed most of the concerns”. Construction on an initial diversionary dam should be finished by the middle of next year.

Laos today is a nominally socialist country ruled by one military-backed party, and it remains one of the poorest and least developed countries in Asia. Yet its hydroelectric potential – which the World Bank estimates at 23,000 megawatts, just a tiny percentage of which has thus far been developed – has long been seen as the country’s most significant opportunity to fund its own development.

For this reason, the longstanding opposition to the Xayaburi project has undoubtedly frustrated the country’s political leadership. The dam’s construction is being bankrolled by a Thai company, and current plans would have almost all of its 1,260 megawatts be sold directly to Thailand.

Yet despite the substantial profits projected for the Laotian government, several studies have highlighted significant economic and social costs, including hundreds of millions of dollars in projected lost agricultural and fishery opportunities all the way to the river’s mouth in Vietnam.

Potentially affected communities have put together several petitions to the governments in Vientiane and Bangkok, asking that the Xayaburi project be halted. The Mekong River Commission has gone still farther, suggesting in 2010 that all dam work on the river be subjected to a moratorium of at least a decade, to allow for greater study of the potential impact of such work.

In 2011, the Laotian government hired a Finnish company, the Pöyry Group, to ascertain whether the Xayaburi proposal complied with the Mekong River Commission’s requirements. To the surprise of many observers, the company found that the project was in compliance and advised the government to continue – though it also suggested dozens of additional surveys and studies.

In August, the World Bank announced that it was sanctioning the Pöyry Group for impropriety (though not specifically for its work in Laos). Nonetheless, critics warn that the Laotian government is now proceeding based almost solely on the problematic Pöyry assessment.