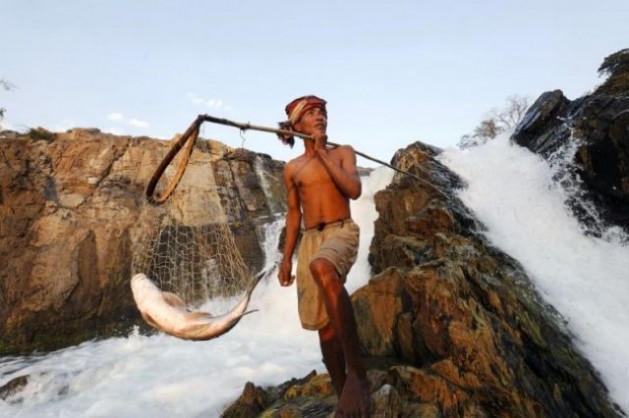 A fisherman on the Si Phan Don riverine archipelago of the Mekong River. Credit: Courtesy of Suthep Kritsanavarin/Oxfam

NEW YORK, Aug 18 2012 (IPS) - The Cambodian government has committed to the construction of two dams along the Mekong River in order to meet a huge demand for electricity, but environmental groups warn that severe repercussions loom for this strategy.

“While each project proposed in Cambodia comes with a different set of impacts, large dams are likely to widen the gap between the rich and the poor, increase malnourishment levels and lead to an environmentally unsustainable future,” Ame Trandem, South East Asia programme director for International Rivers, told IPS.

Four dam projects have been approved so far in Cambodia, with one already operational. All are being developed by Chinese companies on build-operate-transfer agreements, according to Trandem.

The Mekong River runs through six countries, including China and Vietnam, most of which are planning the construction of hydroelectric dams.

“The plans to build a cascade of 11 Mekong mainstream dams is one of the greatest threats currently facing Cambodia,” said Trandem.

The mandate on planning and development of hydropower in Cambodia lies within the ministry of industry, mines and energy, which did not respond to requests for comment.

Another danger of damming the Mekong is the threat to the Mekong delta, an extremely fertile area of land which is responsible for much of the region’s rice supply.

“As the Mekong River feeds and employs millions of people in the region for free, it would be irresponsible to proceed with the Xayaburi and other mainstream dams,” said Trandem.

The Mekong is one of the only rivers in the world to reverse its flow in the dry season. This natural mechanism buffers the intrusion of salt water from the South China Sea into the delta, and could be upset by upstream development.

Dams also block fish migration routes, alter flows, and change aquatic habitats, so these projects are also likely to have an adverse effect on Cambodia’s fisheries.

“The Mekong River Commission’s Strategic Environmental Assessment warned that more than one million fisheries-dependent people in Cambodia would lose their livelihoods and even more would suffer from food insecurity,” said Trandem.

“The loss of even a small percentage of the Mekong’s fisheries can represent in a loss of tens of millions of dollars.”

Partnerships have been established between the countries through which the Mekong runs in order to prevent overharvesting of the river’s resources. However, China is not a signatory to the 1995 Mekong Agreement, and can effectively build these projects independently from downstream countries. The dams in Cambodia are being financed by Chinese investors.

“The impacts of these projects are already being felt downstream,” said Trandem.

Hydroelectricity, even if a successful venture, will not solve the country’s electrification problems, other analysts say.

“Right now it is relatively catastrophic, the power situation in the country,” Alexander Ochs, the director of climate and energy at the Washington-based Worldwatch Institute, told IPS.

Cambodia has one of the lowest electrification rates in Southeast Asia, estimated at only 24 percent, according to the Asian Development Bank (ADB).

The government aims to raise the national electrification rate to 70 percent by 2020, according to the ADB, by expanding the grid and sourcing more than half of the needed electricity from the Mekong River.

A large complication is transmitting the electricity, with only the major cities and surrounding areas having access to power lines, meaning people in rural areas will not benefit from the hydro.

“The number of people that are really connected to a grid as we know it, a modern power service or energy line, in rural areas is as little as seven percent of the population. Overall, nationwide, it’s about 15 percent,” said Ochs.

Biomass is very popular for heating and cooking, predominantly burning wood for fires and stoves.

“Everything else comes from off-grid or micro-grid diesel generators and this is very inefficient and very costly, a very expensive, very dirty way to produce electricity,” said Ochs.

Currently, 91 percent of Cambodia’s power plants are fuelled by imported light diesel and heavy fuel oil, not including the diesel it takes to fuel stand-alone generators.

“All of this happens in a country where you have incredible renewable energy potential. It has amazing potential for wind, very, very good potential for solar,” said Ochs.

Importantly, the solar potential in Cambodia is very high where it’s needed, including in the populated areas, meaning solar technologies can be installed domestically, such as solar panels on the roofs of houses, according to Ochs.

Solar technologies could provide off-grid communities with access to power as well as promoting clean energy in the country. However, solar technologies can be expensive, lack the reliability of stand-alone generators and often need constant maintenance.

The situation is exacerbated by the presence of imitation solar products on the market, which often break easily, thereby diminishing consumer trust in the technology.

“I wouldn’t argue for building a national grid, giant coal plants and importing coal, or developing only large hydro, as recent actions seem to suggest. Let’s work with the system as it is today, and develop distributed renewable solutions on the ground,” said Ochs.